Raindance Gets A Birthday
Firstly a double apology

1. If you are one of the several WW followers that have an issue with me posting photos of my launch – switch off and read a book, in fact do everyone a favour and push delete to WW updates

2. Today is all about the boat – after several weeks of being hauled out at The Slipway Milford, I relaunched today – I have used the term b4 but I’m as happy as a dog with two dicks 🙂
I will not bore you with all the work but Jason and Cam at the Slipway have corrected a telephone book size list of issues, faults and potential future oops – the ‘Readers Digest’ version of the work I’m very happy about is :-

Still a few cosmetic jobs on my list but she is looking 90% perfect.
If you are joining us on Sunday for the Woodys Riverhead Tavern lunch cruise, you can have.a gander dock side 🙂 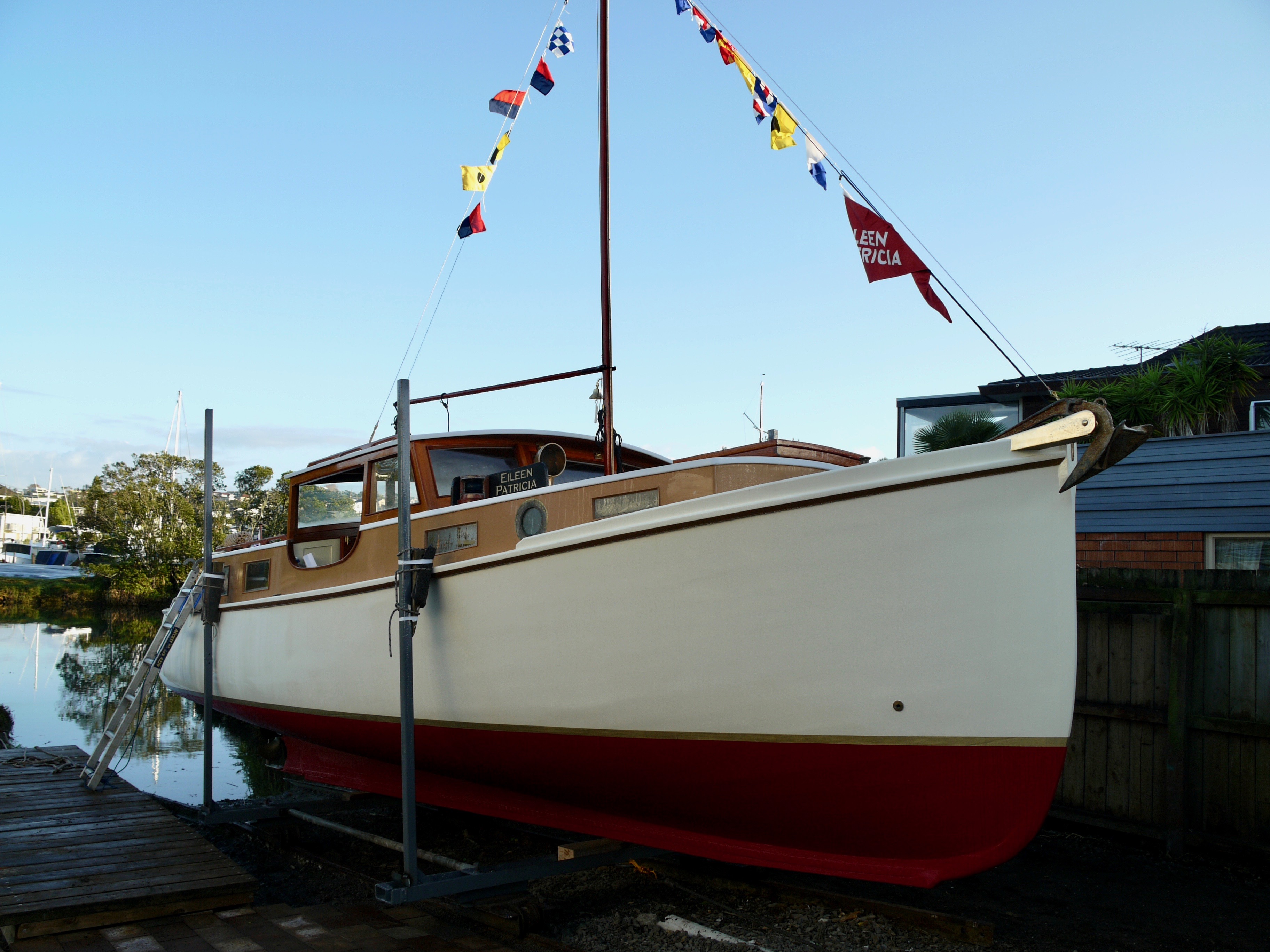 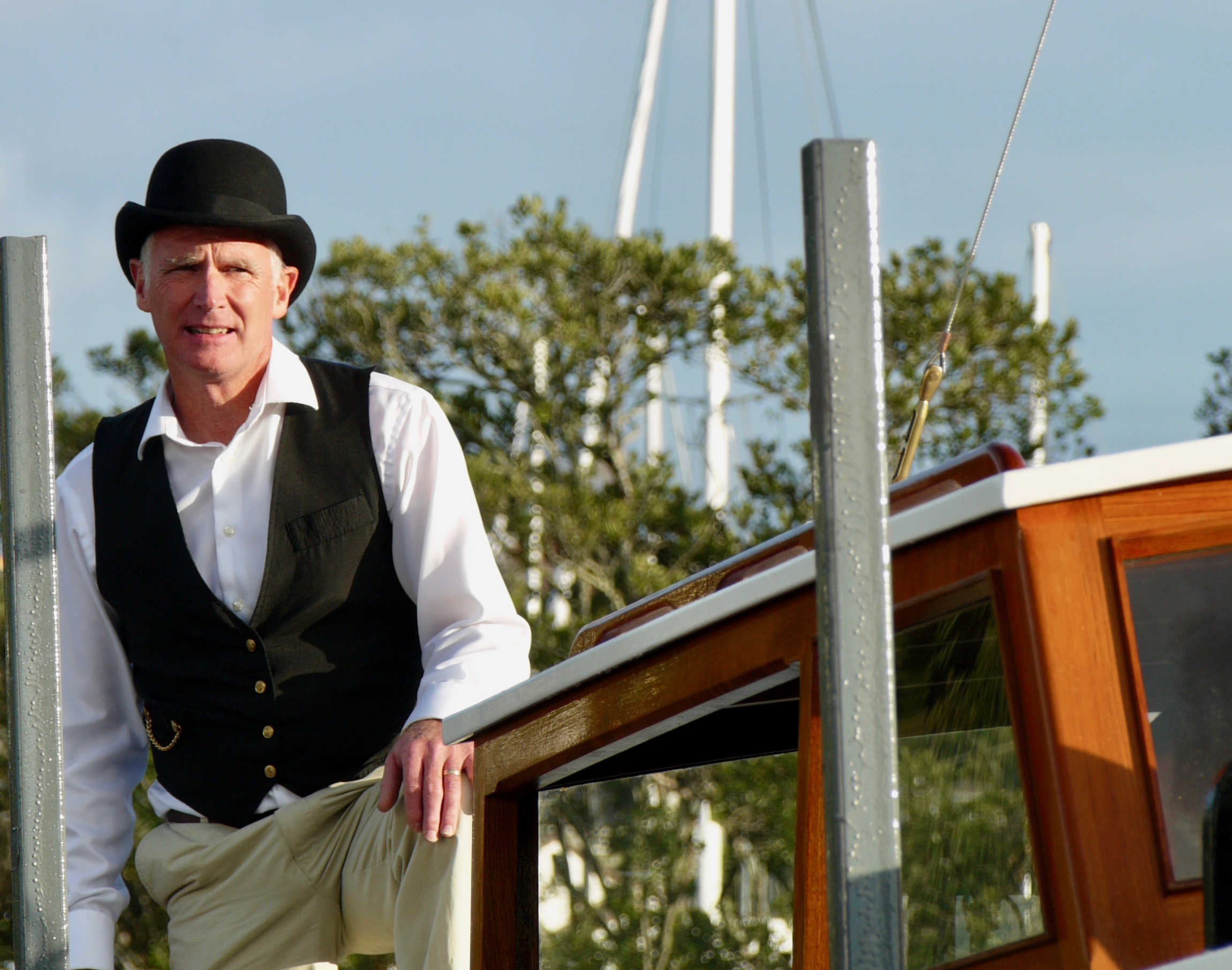 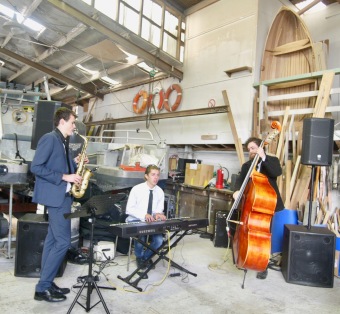 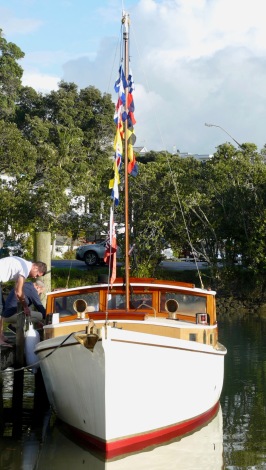 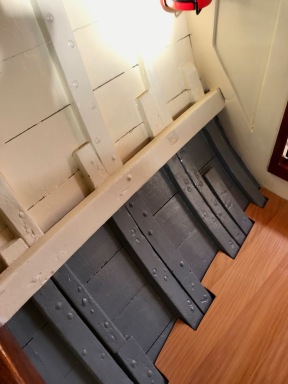 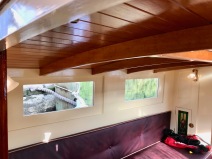 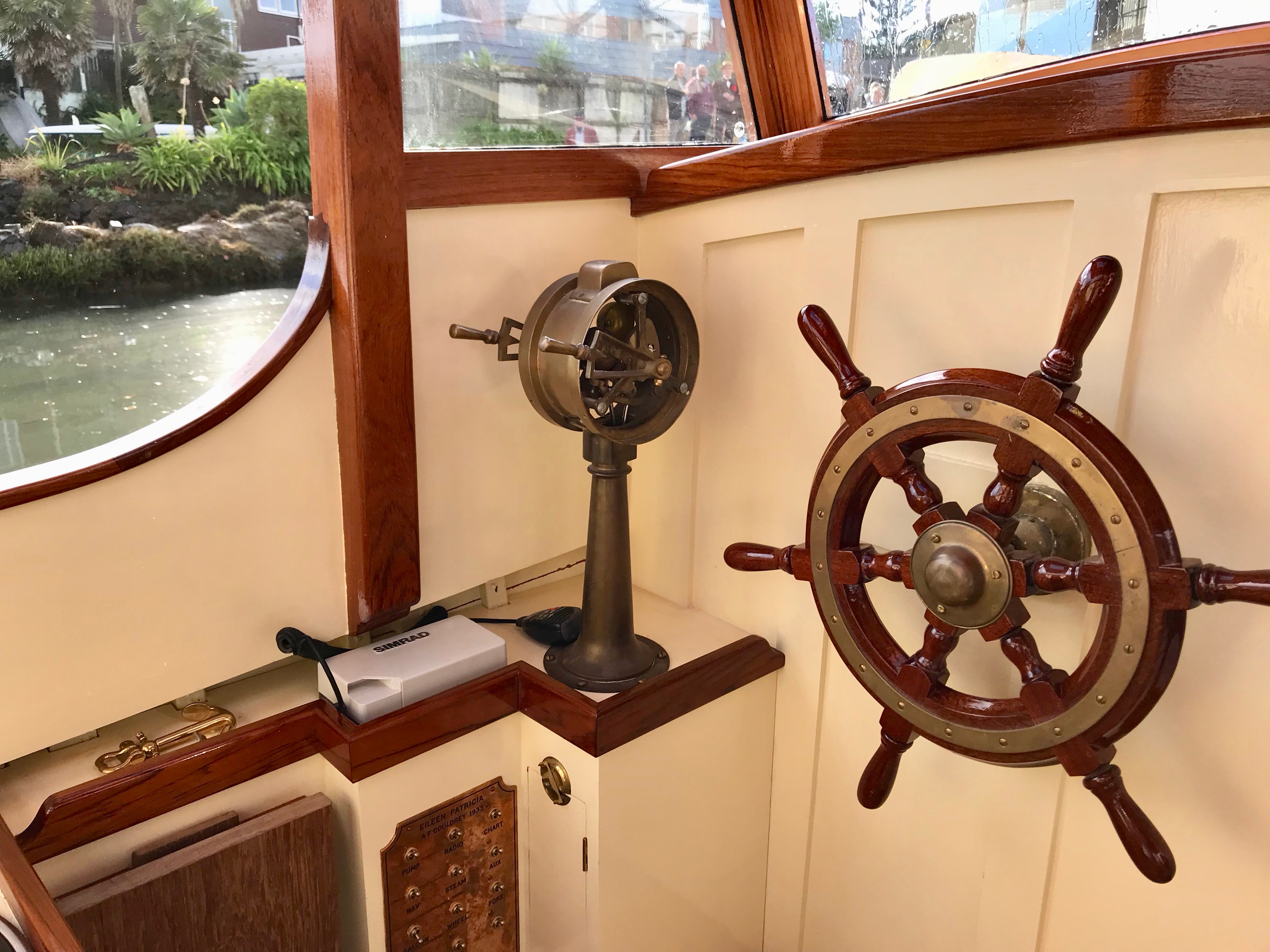 THE LAUNCHING OF THE CLASSIC WOODEN MOTOR BOAT – EILEEN PATRICIA

It was an early (8.30am) start yesterday morning for the classic woodys that gathered to witness Jenni & Peter Mence re-launching Eileen Patricia at The Milford Slipway (ex Geoff Bagnall yard).
The 1933 Arnold Couldrey designed and built motor launch has just undergone a 4+ year restoration at Marco Scuderi’s – MCN Shipwrights yard.
WW has followed the restoration and the links below will take you back to her early days (as launched) and as ‘rescued / saved’ by Peter, thru to leaving Marco’s yard.
The weather forecast didn’t look good, but as always for classic woody events, the sun shone at the right moments and Eileen Patricia was launched in a style befitting a 86 year old lady – Jazz band + Champagne and scones.
Several guests arrived in period costume and the ‘Best In Show’ ribbon would have to go to Paul Powney who sported an original Auckland Motor Yacht Club blazer (photos below).
A special touch was the attendance of several descendants of Eileen Patricai’s builder A. Couldrey.
Links to older WW Stories on Eileen Patricia
https://waitematawoodys.com/2019/02/19/eileen-patrica-restoration-update/
https://waitematawoodys.com/2017/03/08/a-sneak-peek-at-eileen-patricas-restoration/
https://waitematawoodys.com/2014/11/11/9603/
The Big Event Launching Video (turn up the volume, nice music)
Two of our finest woodies My Girl and Pacific were on hand to escort Eileen Patricia out of the marina and home to her new marina. 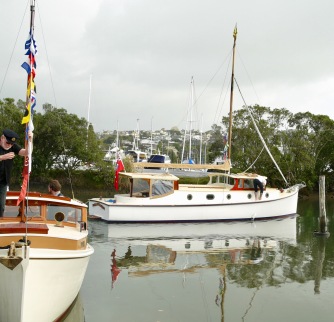 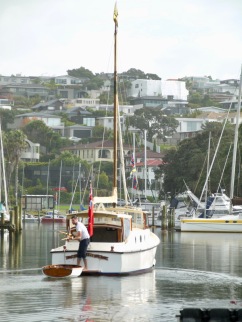 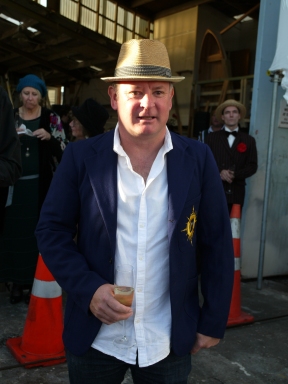 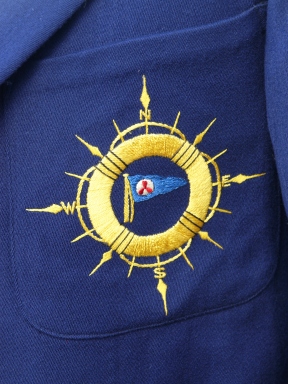 Update3  – Video of Pacific, Eileen Patricia and My Girl leaving the Milford Marina / creek. Sent in by Paul Powney. 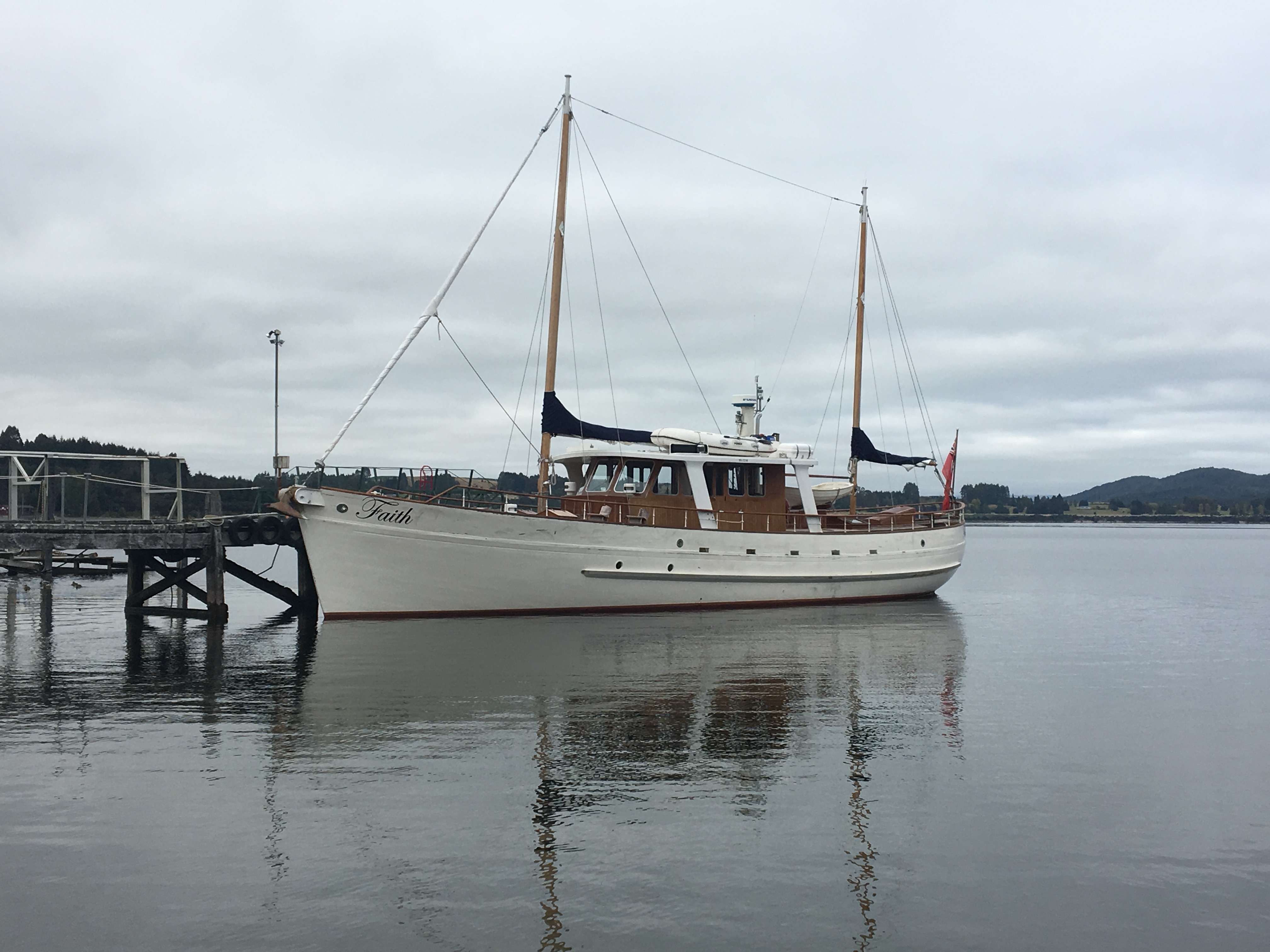 Woody Steve Horsley on a recent trip down south snapped the above photo of Faith on Lake Te Anau.
I recall seeing previous photos but can not find her in the WW library – can anyone tell us more about her?
Input from Cameron Pollard – Faith was built in Scotland in 1935. Sailed to New Zealand in 1980 after cruising the Med. Currently has a 6L3 Gardner.
I was told by one of her old skippers the late Bill Anderson that she was originally twin screw. Bill could certainly tell a good yarn so that info cant be held as gospel.
Input from Dick Fisher

“Faith was built for an English Lord I believe his name was Shalcroft ( I can be corrected on the spelling of this).. Faith was purchased in England by a Roy Ryan who was employed by me at the time of his arrival in NZ having motor sailed all the way from the UK with all their household furniture & belongings. The crew consisted of his wife & young daughter.
Engine power at that time was from twin screw P6 Perkins Diesel engines. Faith was next purchased by Peter McDonald &amp; berthed in Whangarei, he then commenced a major refurbishment
wherein the 2 Perkins were taken out &amp; a rebuilt 6L3 Gardner was installed. At the same time the wheelhouse was rebuilt along with much other woodwork most of which was done by Nick Rodokal
The Gardner engine was from an ex fishing vessel purchased from Happy Yovich in Hikurangi.
The teak single skin planking is fastened with bronze bolts.
I have seen Faith hard at work on Lake Te Anau where my step-son now lives .

Hope this fills in some gaps for you.”
Dick Fisher
MV Akarana
Whangarei

I’m very happy to be able to tell you that Geoff Bagnall’s Milford yard is now back in business and operating under the watchful eye of woody Jason Prew.
Its called The Milford Slipway and if your a regular reader of WW I do not have to tell you the benefits of hauling out on a railway slip + they offer just about every service marine to would need.
So whether you just want to haul out for a quick bottom scrub and anti-foul or you need a boatbuilder, electrical, or engineer – The Milford Slip can sort you out + there is a covered workshop for vessels up to 55’ – I will do a full feature on the yard soon, but in the mean time I would suggest you give Jason a call on 027 454 2490 to book a spot, I have already slotted Raindance in 😉
Website (holding page) here  http://www.slipway.co.nz/Slipway/About_us.html
If you have been hauling out city-side you will be pleasantly surprised with the yards rates 😉
Ps If you are like Mark Edmonds on Monterey and a little apprehensive of coming into the marina via the creek, the boys will meet you and pilot you in.