The Restoration of Rogue

Scrolling thru the USA WoodenBoat Forum yesterday my woody antenna popped up when I saw a new thread on the New Zealand yacht Rogue – the 1892 gaff rigged 32’ cutter built by Chas Bailey Jnr. , it was in fact his first design.

The restoration of Rogue has been a happening thing since late 2007 and a lot of the time under the radar, not helped by her residing in Wellington.In the 2015 > 2018 period there were some unexpected ’speed bumps’ that derailed the project, and her owner relocated north to Auckland. So in early 2021 after a 120 year absence Rogue followed her owner and returned to Auckland and slipped into Wayne Olsen’s shed at the Horizon Boatyard. There the restoration has moved along at a good clip, and CV-19 aside, we can expect a splash date in early November.

I would be surprised if there was a better documented history on a classic vessel in New Zealand, and the restoration project is jaw dropping – an amazing commitment to one of New Zealand’s magnificent maritime artefacts.
Below are links to the most recent project monthly updates , but given that most of us are in lock-down, I would encourage you to click on this link https://rogue1892.com/rogues-restoration/ and scroll (its a long way) to the bottom and follow the project from day one.

Now I’m sure to some / most of you the bay in the above photo will be very familiar but not to me. I have a good hunch but I’ll let you all chip in. Remember you can click on the image to enlarge & if you click again on the enlarged photo it will zoom in even more.

Wirihana 1
The 2nd part of today’s post is a great photo, below, I found in Mac Taylor’s album, the launch is the first Wirihana (1) – there is a great story found at the link below concerning Wirihana (1), which most likely became Lady Gay (1) + how Wirihana (2) & Lady Gay (2) fitted into the scene. Great reading & a fine example of the ww blog really working.
https://waitematawoodys.com/2015/03/23/wirihana-who-built-her/

Seems everyone is right on the button with ID’ing the location – Harold Kidd sent me a link to the Henry Winkelmann photos (post card) ex the Auckland Museum collection below, taken in 1899. It is ‘Rodmershaw’ the residence of Mr Lushington.

I’m very familiar with the location as early one morning during a Mahurangi Regatta weekend, I had to retrieve my #1 kauri clinker dinghy from the beach after it went walkies in the night & washed up there, undamaged. The gods were smiling on me that weekend 🙂

Update from Harold Kidd
The photo below, ex Auckland Museum collection,  shows Mrs Lushington sitting on the ballast of her husband’s Robert Logan-built yacht MURITAI in 1899 at the property.
The 22ft mullet boat on the beach behind MURITAI is the 22 footer BELLE built by Hewson & Melville in 1883 also owned by Lushington. BELLE was converted to a deadwood keel yacht & later renamed LOTUS.

Pam sent me the photo below of of her partner, George Emtage, grandfather Captain George Samuel Emtage. They lived in a bay just around the corner from the bay shown above and worked for the Lushingtons and the Chandlers on Motuora. The excerpt from the book Jade River tells the story of how George’s family inherited Motuora island. 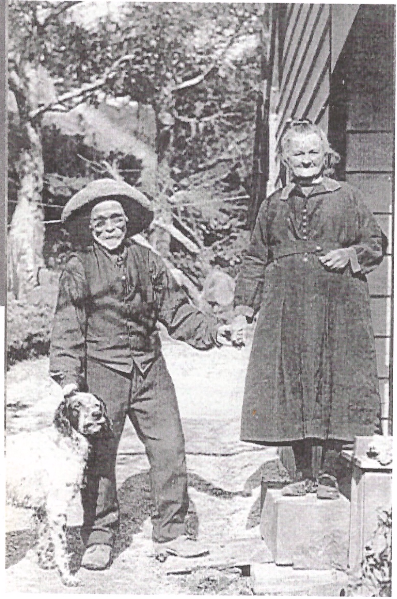