Book author and publisher – Jenni Mence (she will hate me using that intro, but its true) whose last book was the uber cool – ‘K CLASS – The Hauraki Gulf’s Iconic Racer Cruiser’, has committed to another mammoth publication. This time focusing on the Arnold Francis (Bill) Couldrey design and boat building bloodline.

Currently in the final research phase, Jenni has called out to WW readers for help identifying the boats and discovering / confirming things like –  the boats built and when, the current owner and/or anyone (owner or otherwise) who has a story to tell about the boat. Jenni would also love to talk to anyone who has memories of Bill himself.One has to assume many of the boats won’t have lasted the distance, however there may still be stories or family photos hanging around of them.
To help keep things semi organised we have broken it into loose categories

Any further information anyone has on any of these boats – or other Couldrey boats we may not yet have identified would be really appreciated.

As a reward for your input, everyone that helps out will go into the draw for a copy of Jenni’s K CLASS book + the best photograph submitted (judged by Alan H) also goes into a draw for a another copy of the book. Thats 2 Copies To Be Won. Draw Close off date is August 1st – just in time for Father’s Day 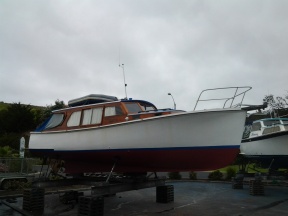 According to her owner, Mike Rowe, Kereru was designed by Couldrey & built by Atkinson. She looks totally original, is  28′ & powered with a Perkins diesel. Rowe has owned her for 25 years.

She has amazing similarities to the Brin Wilson built Kereru, featured in an earlier ww post & seen on the front cover of the June edition of Sea Spray, back in 1960.

Anyone able to shed some light on her past & confirm the design/build? 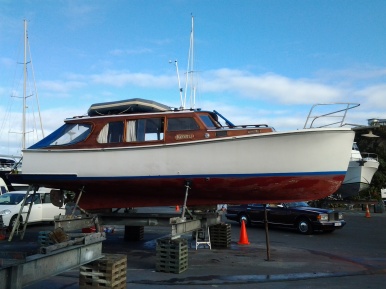 Interesting letter from Bill Longhurst’s son attached. I was rather flattered that he thought this was my site. Naturally I put him straight and copied to Alan.

“Hi Harold,
Saw the photos of Kereru on your Wooden boat site.    Funny enough  I googled Bill longhurst, who was my father and  I see his name come up on Wooden boats, and I go into the site and the first photos come up of the Kereru……28 foot launch.

Just to put the record straight the 3 photos are definitely that of Dads launch the Pamela.
Built by Keith Atkinson, and designed by Bill Couldrey that happened to live in the same street in Northcote- Heath Avenue.

Dad owned the launch for only 4  years or so, and then sold it to a guy that lived in Picton I think, it  was road transported to Wellington and sailed to Picton.

Dad sold it due to poor health, he was a Art teacher at Northcote College for  26 years and retired at 55 years of age due to a heart condition, he had a hard life due to being a navagator in the Air force in World war 2, and died at the age of 62 from cancer.

I can tell by the photos that  you have that this is Dads boat  by the water deflecters he made, that look like boonarangs at the end of the cabin on both sides, and have photos that are identical to this.

I have since seen the boat on a pile mooring in the Weti river at Stillwater.

Amazing to see these photos of Pamela again………..

Hope some of this information has been helpful to you.

So there’s a “new” Couldrey launch for us.

Following on from yesterdays post on the mystery Brin Wilson’s motorsailer – today we have Kereru (maori for pidgeon) another Brin Wilson designed & built 30′ motor-sailer. Originally built for Frank Pidgeon (……..Kereru).
She was the cover / lead story on the June 1960 edition of Sea Spray.
With a 86hp Ford diesel engine she would have had a good turn of speed when the wind dropped. These boats were very practical & attractive solutions to the power/sail dilemma , the only other that has come close is the fiberglass replica Logan 33’s, which unfortunately are no longer in production.

Anyone know where Kereru is today?

Update from Mark McLaughlin (article from NZ Herald 29 Jan 2011)
Kereru is now on Lake Rotoiti & since arriving she has had her saloon windows enlarged but is otherwise fairly original, and kept in great condition. There are also some photos of her on WW under the 2014 Wooden Boat Parade post.