CRUSADER + WOODY WEEKEND
Today’s woody story features the above photo of the 1929 Collings & Bell built launch – Crusader. The photo comes to us from Bryce Strong, who uncovered it while undertaking a ‘lock-down’ cull of his father’s photo albums.
At a guess the photo could be from the late 1980’s.
Crusader has made numerous appearances on WW, being a well done launch having been owned by the Rev. Jasper Calder.
She started life as a very fast flush decker but very early on (between 1929 > 1935) she morphed into a bridge decker.
As testament to her speed, she won the NZ Power Boat Association – ‘My Girl Trophy’ for launches steered by ladies. I understand My Girl’s current owner Jason Prew is very keen to locate the trophy or any intel on its past.
In the WW link below you can view her transformation and read more about her past.

THIS WEEKENDS WOODYS CLEVEDON CRUISE – REMINDER
Full details on the weekend have been emailed to the attendees. Great numbers attending, over 20 boats.
BUT REMEMBER – today (Thursday) is the last day to order our freshly shucked 1/2 shell oysters from the Clevedon Oyster Company – see ordering flyer below. These will be delivered to the Clevedon Cruising Club.
SPECIAL THANK YOU TO DAVE GIDDENS – Dave has provided us with gift for the CCC , as a thank you for hosting us. The man is a legend 🙂 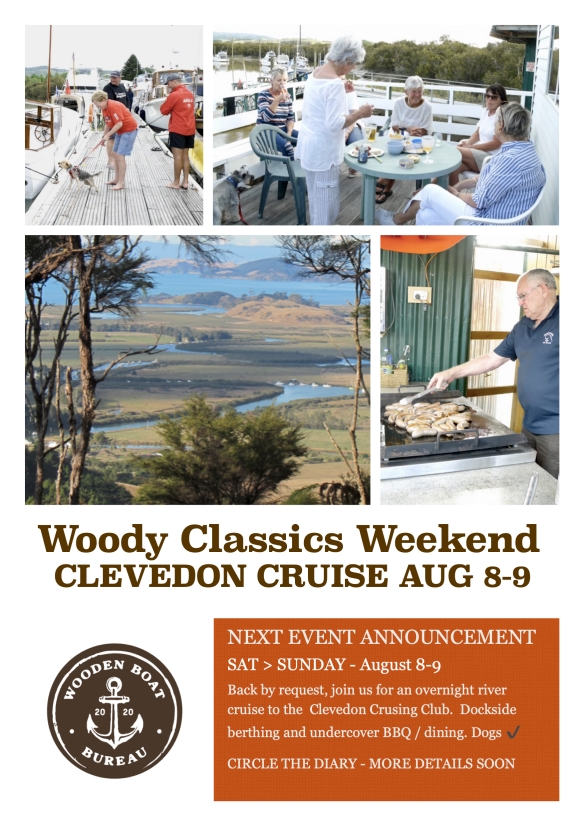 Thanks to a prolific burst of Bay of Islands photos recently on Len Redwoods fb page we get to have a glimpse of boating in the BOI’s back in 1950’s.
Most are taken in or near the waterfront township of Russell.
Make sure you check out Mondays WW story – a wonder full gallery of photos and a special request for help to find a woody. 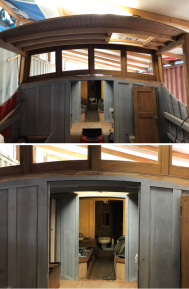 If you are not following Jason Prew’s restoration of his 1925 Dick Lang, classic motor launch, ‘My Girl’ on his weblog (link below) you are missing a great woody project. The man is a very talented craftsman & has a cunning knack of being able to press-gang some of the wooden boating movements best minds & hands into helping at the right time 🙂
The project has really come along over the winter months – the photos above are just a taste of whats on show. Jason posts regularly so you can experience the work vicariously 🙂
http://www.my-girl.co.nz/mygirl/Restoration/Restoration.html
A Handy Hint: if you type My Girl in the ww Search Box you will get an overview of all the ww stories on My Girl.

It’s almost 2 years since we ran the story below on the missing My Girl Motor Boat Trophy. In the last 2 years the readership of waitematawoodys has increased by x14, so we have run the story again in the hope that one of the new readers might be able to shed some light on the missing trophy – read below.

This ones going to test the collective memory base of the all the woodys out there. We are looking for a trophy that was linked 80+years ago to the NZ Power Boat Association, I’m talking here about the old NZPBA, with races that involved real wooden boats – not the lumps of fiberglass with oversized outboards on the back they race today.

The trophy was the ‘My Girl’ trophy & was donated by a Mr. C. (Tui) Waldron to replace the ‘Burt Cup’. There are numerous press clipping that mention events where the cup was contested, won or presented. I have attached copies below for your reference / interest.
Despite all the searching no photo can be found of the cup.

The present-day owner of the launch ‘My Girl’, who the cup was named after, Jason Prew would like to track down the whereabouts of the cup &/or any information on what became of it. While the cup itself may not have survived, someone out there must know something about its past. Launches that have won the trophy include – Taura, Tasman & Crusader. Crusader was owned by the Rev Jasper Calder & was steered to victory by Miss Edna Herick. It appears that in several of the events that the trophy was offered up, one of the conditions of racing was the vessel had to be steered by a woman.
Launches that have raced for the trophy include – Taura, Aumoe, Edwina, Tasman, Nautilus, Ramona, Crusader, Wailani, Lady Margaret & Wanderloo.

So folks anyone able to help out in the hunt??

16-03-2018 Update – the other day Jason sent me the video clip below of the 130hp Volvo that will be sliding into My Girl. Shows the green lump running on a pallet – he would have happy that 1. it started 2. no knocks 🙂 With Mr Volvo at full chat, he will be buying a  set of water skis 🙂

Update 11-08-2020 Two and a bit years later there is a transplant underway – as they say in Thailand ‘same-same’. Just new and better 😉 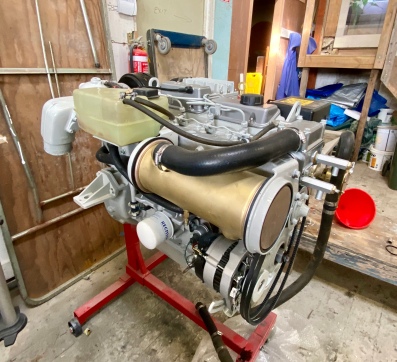 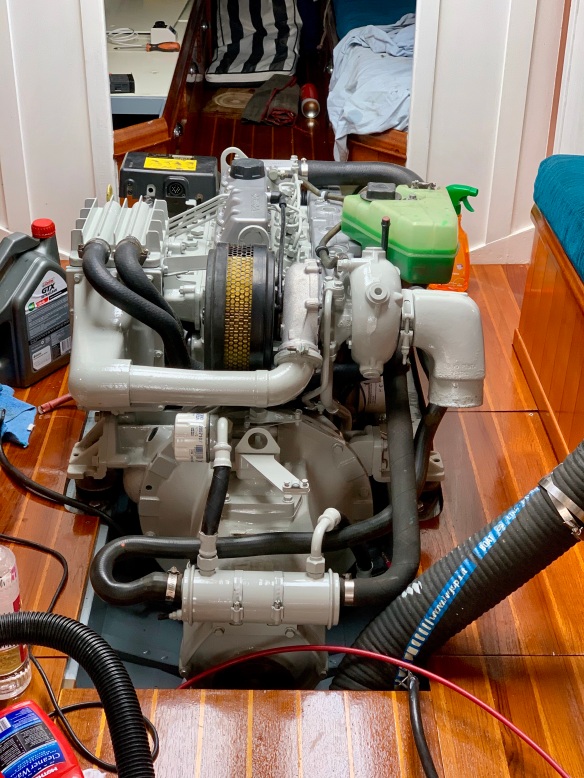 Next wet weekend when you have little to do, have a peak at the Auckland Libraries, Sir George Grey photo collection, its a gold mine of old Auckland photos. Nathan Herbert pointed me to the collection & while you have to troll thru a lot of average material, every so often you click on a nugget like the above photo of Crusader under full throttle at Great Barrier Island, photo taken December 1929. Given she was built in the winter of that year by Collings & Bell for the Rev. Jasper Calder and Charlie Goldsboro, the above photo could have been her maiden cruise.

The photos of today’s launch were sent in by Eddie Viv who has recently purchased her. She is currently named Misty Rose but was previously named Sybil Frances. From what Eddie has been able to learn she was apparently built in 1945 & is 3 skin kauri. In the past she has been a commercial long-liner & was owned by a person named Jack for 35 years and was moored at Port Fitzroy , Great Barrier Island.

Back then the trademe listing had her as c.1935/36 & powered by a 120hp Ford. In the comments on that post Shamus Fairhall advised that she had been owned by a diesel mechanic named Jack Ngati, kept on the piles up the Tamaki River & used as transport to his property on the Barrier.

So woodys a few more details – can we expand any more?

Crusader was built for Rev. Jasper Calder and Charlie Goldsboro by Collings & Bell in the winter of 1929, originally without her later bridgedeck. She replaced Calder’s 20ft mullet boat Ngaro. During the 1930’s Calder would hold church services aboard the launch in Mansion House Bay, Kawau Island during the summer cruising season.
The photo (MTC) above shows Crusader running down the harbour on her way to winning the NZ Power-Boat Association’s race for the ‘My Girl Trophy’ for cruisers steered by ladies. The insert is of Miss E Herrick, who was at the helm.

The xmas 1948 photo (KR) below shows Crusader anchored in Mansion House Bay, Kawau Island. By this stage she was sporting a bridgedecker

LOST – we are still trying to track down the ‘My Girl Trophy’ so if anyone has it tucked away, drop us a note.

Also if anyone had an old NZ Power-Boat Assn. burgee, I would love one………… you can see it flying on the bow of Crusader (has a propeller in the center). Would swap a ww t-shirt for the burgee 😉

Looking for a classic wooden boat fix in the weekend?

Visit the Classic Yacht & Launch Exhibition at the Viaduct. Hosted by the Tino Rawa Trust.
This years feature designer is Des Townson. The exhibition will showcase the best of his designs in two displays – a static out of water display of the Starling, Zephyr and Mistral sailing dinghies and rafted up on the Visitors Berth will be a selection of bespoke Townson yachts including ‘Serene’, ‘Moonlight’, ‘Talent’, ‘Infinity’ and the one & only launch Des designed ‘Aristos’ will be there as well. You can view more on Aristos here https://waitematawoodys.com/2015/03/09/aristos/

In the exhibition marquee will be half models and memorabilia.

TIMES: Saturday 3rd October and Sunday 4th October between 10am to 4pm. Entry is FREE
LOCATION: Karanga Plaza and Visitors Berth, Viaduct Harbour. (Between Team New Zealand Base and the Viaduct Event Centre). 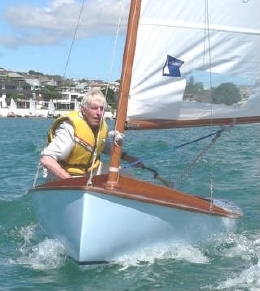 Black Watch was either built for, or bought new, by the late Rev. Jasper Calder an Anglican sea loving vicar.

Ken Ricketts first saw Black Watch under construction in c.1947-48 on the port side of the creek, in the right hand corner of Leigh Harbour. She was at the stage of completed hull & combings, with no or little paint, her hull was built of very narrow Kahikatea planking & from memory kauri combings. She was as she appears in the photo except that she was initially painted completely black.

Black Watch was actually Calder’s second boat, the first being a 1925-30 vintage bridge decker, approx. 38 ft., called Crusader, that he owned in the 1930s. Ken recalls his father, Ralph Ricketts, when he was cruising on the Glennifer with the late Trevor Davis, attending impromptu church services on board Crusader along with many other boaties of the day. The crews would all tie their dinghies to the stern of the Crusader for the ‘church’ service most Sunday mornings in Mansion House Bay, Kawau Island over the warm summer months. You can see Crusader marked in Ken’s photo, taken Xmas 1948, of Mansion House Bay.

Ken commented that Calder did not have a lot of money to spend on his boats & love of the sea & Black Watch’s original engines were one 6 cyl Perkins diesel & one Ford V8 (probably both second hand.)

Note: Calder towards the end of his life, acquired an interest in an unfinished 75 foot H.D.M.L. naval vessel, which was the only one the navy disposed of for many years, which Ken believes was still under construction when WWII ended, so the Navy sold her possibly unfinished. Calder named her Black Watch as well.

Ken sighted the Calder’s H.D.M.L. recently at Bayswater on a swing mooring, in an extremely neglected state. Previous to this Ken had seen her in the 1980s, tied to a wharf in Schoolhouse Bay, Kawau Island, where see remained most of the time, for a number of years. She had then & possibly still has, twin 6 cyl Perkins diesels. She was modified many years ago in the 1970/80s to a type of semi motor sailer with 2 masts & a semi clipper bow.

CRUSADER was built for Rev. Jasper Calder and Charlie Goldsboro by Collings & Bell in the winter of 1929, originally without her later bridgedeck. She replaced Calder’s 20ft mullet boat NGARO.

I wonder who built the first BLACK WATCH for him?

Calder had two HDMLs, both called BLACK WATCH. The first, Q1349, was returned to Navy in July 1952 and has since reverted to BLACK WATCH. All RNZN HDMLs were built in North America, none were “under construction when WW2 ended”.