Talking with Bay of Islands woody – Dean Wright recently, he mentioned that John Gander had sent him a story on the work boat Reo Moana. I’ll let John tell the story –

“I am prompted to write a few lines about Reo Moana after seeing her coming through the Albert Channel and arriving in the Bay of Islands, she looks so different with the extra top hamper that has been added. Her current owners have recorded that she was built by Roger Carey, this is not correct, see below.

I worked at the Carey yard and in 1963 we commenced work on a Roger Carey design of a 51’x15’8”x 7’ fishing boat for John Buchanan of Cascade River. She was carvel planked in karri and launched in 1964 named “Compass Rose” The moulds of this Roger Carey design were then taken across to another Picton boat builder Bob Swanson. Bob’s yard was directly opposite the Carey yard at the southern end of the harbour, it was formerly the site of Ernie Lane’s boatyard.

Bob was commissioned to build a boat to this Roger Carey design by Bill and Sylvia Kenny of Red Funnel Launches and an associate. She was built multi skin and was powered by a 6LX Gardner. There was talk that the boat was to do a Pacific cruise that was to include Tahiti but the cruise did not come to fruition. She was put into service with the Red funnel fleet, it was also at this time that the pine plantations in the Sounds were starting to be harvested and with a substantial tow post Reo Moana was regularly used to tow rafts of logs to Picton. Her spacious after deck also proved ideal for work in and around the Marlborough Sounds.

In the above photo she can be seen in the Red Funnel colours, I was involved with salvaging the fishing vessel Ascot that had sunk in Cloudy Bay and we used Reo Moana as the salvage vessel to tow Ascot into Port Underwood to pump her out and then continue the tow to Picton.

Seeing her now, photos below, I suppose she is handy for charters in and around Auckland, but with the windage from the considerable extra top hamper that she now carries, I think she would be more that a handful going alongside wharves in the Sounds in some of the extreme wind conditions that can be experienced at times.”

RED FUNNEL LAUNCHES
While on the topic of Red Funnel boats- I was sent the photo below of Ramona by Liam Daly. Liam commented that Ramona along with Reo Moana, Rawene, Rongo and Rio Rita made up the fleet of  Red Funnel Launches operating out of Picton . The “Rio Rita” was the prominent mail boat in Queen Charlotte Sound for many years, later when sold, re-named – Resolution.
The photo of Ramoana shows her in Resolution Bay, Queen Charlotte Sound

Today’s photo comes to us from Lew Redwood’s fb and shows the spectator fleet that gathered to farewell the yachts heading off in the 1967 Whangarei to Noumea yacht race. We have a classic woody mid photo – my first thoughts were – Romance II but on closer inspection its not her.  So woodys – who do you think it is?
Southern Woodys – A question
Does anyone do or know of anyone that does, ‘private’ bare-boat charters in the Havelock / Pelorus / Kenepuru Sound / Picton / Queen Charlotte region? A very experienced woody is looking to come to a gentleman’s arrangement re the use of a launch in the Marlborough Sounds this coming February (2020). For more details email me on waitematawoodys@gmail.com

RVSP   jenni@kclass.co.nz
SAD NIGHT ON AUCKLANDS WATERFRONT
Woody Angus Rogers sent in at around 10pm the photos below of the launch Rio Rita on the rocks outside the OBC breakwater. Coastguard were in attendance. It was high water so unless she was towed off, she will be high & dry. Very sad. 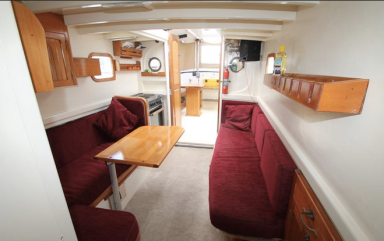 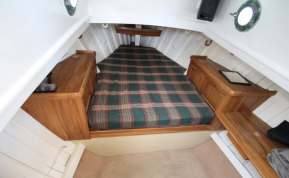 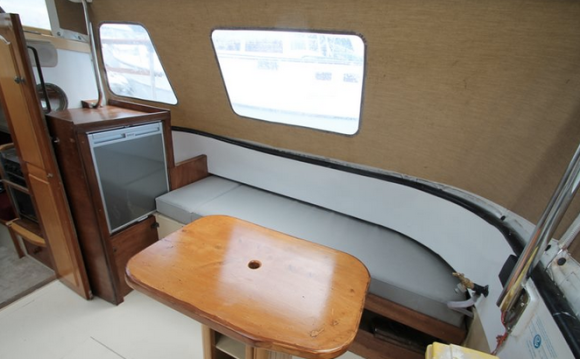 Its only a mystery because the broker selling it obviously doesn’t want to sell the vessel. Why else would you not include the vessel’s name & designer / builder details?

I can tell you this bridgedecker is made of wood, 42′ long, built in 1929, is powered by a 75hp 5LW Gardner diesel & sleeps 6.
Her current home is Picton & at $49k ono its appears a reasonable buy – unless of course it was built in India 🙂

Update – so it looks like it is Rio Rito / Resolution, the photo below of Resolution was sent to me by Don Macleod, taken in Mercury Cove in summer of 2011. 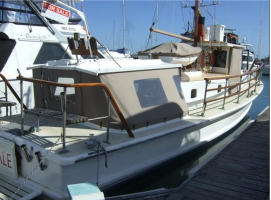 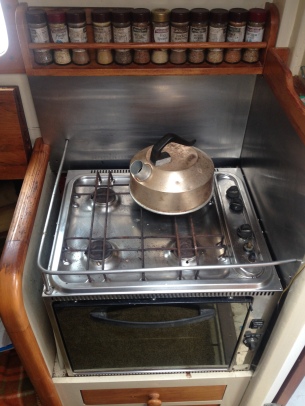 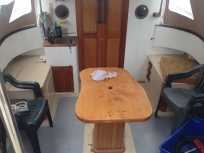 1. Want to go cruising on a classic launch this Christmas?

Loads of history associated with this traditional timber launch. See waitematawoodys.com/2014/05/20/a-mystery-boat-200514/  . There’s further discussion regarding “MV Rio Rita” serving in 1942 for a period as a Battery Artificer for a gun crew in the Sounds out from Picton.

Renamed “Resolution” in 1971 when she relocated to Resolution Bay, Marlborough Sounds. For approximately the last 15 years she has been owned and maintained by a former boat builder in Omokoroa, Tauranga. Resolution has spent these long summers engaged in extended cruising up the coast between Tauranga and the Bay of Islands. This owner maintained her well and installed beautiful cabinetry throughout the interior, with materials in keeping with the vessels vintage and pedigree.

“Resolution” was recently acquired from this estate, as part of a “boat & berth” package in Tauranga’s Sulphur Point Marina. As traditional and beautiful as she is – Resolution is now surplus to requirements and seriously on the market following a significant price reduction. While Resolution requires a small degree of ongoing maintenance, nothing is urgent & work can wait until after the coming summer boating season.

Her new owner (boat & berth purchaser) has had a pre-purchase condition survey (dated Nov 2014) completed by Pacific Rim Marine Survey’s Limited, which will be made available to any prospective purchaser. Owner needs to sell her to make space for his existing boat so the price reflects this, I understand offers around $58,000 will buy her. Click the blue link below to view the extensive inventory & read more.