Todays photos come to us via Len Redwood and Paul Hansen ‘s fb – in the top photo from L>R we have the Earnslaw (obscured), Mountaineer , then Ben Lomond and finally Muratai.

In the second photo we see the bow of Mountaineer tied up at the Kingston Wharf, Lake Wakatipu.

While the Earnslaw is well known to most of us, keen to learn more about Mountaineer and Ben Lomond. There is a brief mention of both vessels in this WW story https://waitematawoodys.com/2014/03/18/thelma-vera/

The poster below for the NZ Antique & Classic Boat Show (Lake Rotoiti – Nelson Lakes) is a stunning piece of nautical art – each year they step it up a level. I’ve been – it is always a goody so circle 4th>5th March 2023 in your calendar.

How today thanks to a fb post by the company that restored her – the Repair My Boat Yard (formerly Southern Classic Boats) in Invercargill, South Island, we get to see Lion, back on Lake Wakatipu, Queenstown.

Hats off to everyone that was involved in the project – she is up there with Rawhiti in terms of attention to detail and workmanship.

And a peek back at per restoration here https://waitematawoodys.com/2016/03/15/lion/

I was subsequently contacted by John Bullivant who supplied the above photos of Meteor III. John advised that his research uncovered that all of the Metero’s (1 / II / III) were owned by Frank Haworth, who ran a very successful tourism business in Queenstown in the 1950’s>1960’s.

It is believed that Meteor III was NZ’s first hydrofoil , but built in the UK. Meteor III cruised at 55 kph and topped out at over 70kph.

I understand that she operated on the lake until the mid 1990’s, but these days is run by a charitable trust and occasionally comes out of retirement.

When she first hit the lake in the 1950’s, based on the photos it must have been an impressive sight.

Woody – Shamus Fairhall spotted the above photo in an OP Shop last week.
The launch is named – Thelma and is a straight stem, counter stern of the early milk maid style hull. No idea of the builder but the photo was taken on the Frankton arm of Lake Wakataipu.

Lake Wakatipu is an inland lake in the South Island, in the southwest corner of the Otago region, near its boundary with Southland. Lake Wakatipu comes from the original Māori name Whakatipu wai-māori. With a length of 80 kilometres, it is New Zealand’s longest lake, and, at 291 km², its third largest.

The back says it is a printed from a 1910 photo from the Muir and Moodie collection – National Museum.

Any of the woodys able to shed some light on Themla? Got to love the wharf, looks very flimsy in relation to the standard of attire of the onlookers 🙂 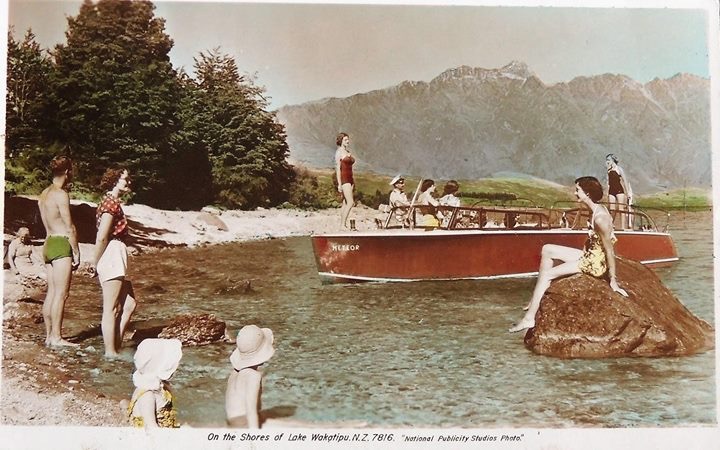 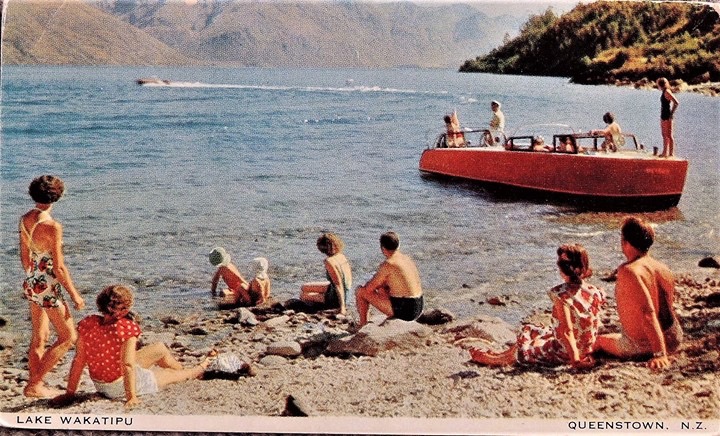 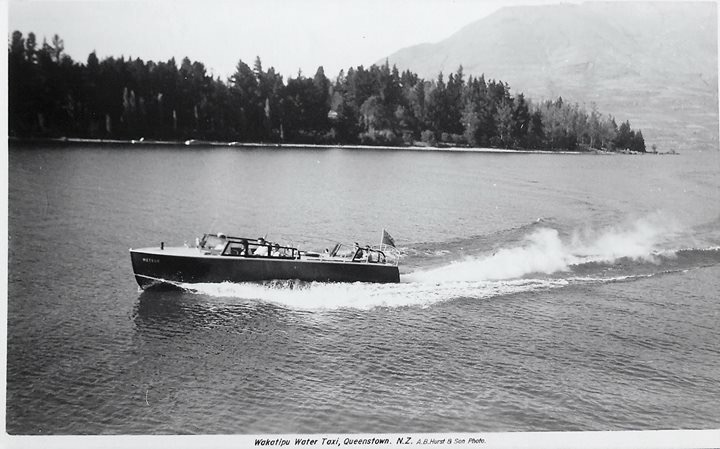 The above photos of the speed boat – Meteor shown here on Lake Wakatipu , & are ex Len Redwood via the Pre 1975 NZ Car,Boats etc etc FB page.

So woodys – the question of the day – what do we know about Meteor?

Note: There is another speedboat named Meteor (built by Sam Ford in 1931) that has appeared on WW – do not be confused.