Surprise and Delight on Rakino Island
On Wednesday afternoon we made the call to remain in Woody Bay, Rakino Island, even though the forecast was for a swing to the SW, well that happened but it did luckily die off later in the evening. Our weather call was rewarded when we went ashore late avo to take the dog for a pee – we spotted a sign that promoted a pop-up pizza shack, just up from the beach. For the overseas WW readers – Rakino is off the grid e.g. no power, water, sewage, no shops etc and a very irregular ferry – sometimes only once a week. Situated in the Hauraki Gulf.

We decided to give the steaks to the dog and went ashore at 6pm. The place was humming, not many boat people (given the weather) but the locals were out in force. Which is always a good sign. The surprise was discovering the place – the delight was the pizzas were a 9/10 and there was a live soloist entertaining the crowd – lots of Nancy Sinatra songs, so an instant hit with me 🙂 See video below. The singer, Jennie Cruse is Auckland based and available for hire – 021 266 4330

Its open daily until Jan 24th and then from Jan 25 > April 5th its – Fri/Sat/Sun. So woodys if you are at Rakino or are looking for a great location to cruise to – check out the ‘Woody Bay Pizzeria’. I can see a potential – Woodys Classic Weekend Cruise on the horizon.
The ‘carpark’ is a hoot – no Audis or BMWs here 🙂

Man Sets Launch On Fire – Wairangi
I was sent the link below by my friend John Burland to a story by Tim Newman that surfaced on the STUFF website.  Sounds like a relationship that went west and one party sadly took revenge. Have a read. My question is – is the boat in the article – Wairangi, the same boat in this WW story? https://waitematawoodys.com/2016/10/10/22920/  I know the STUFF article says the boat was 7m long, but in the photos below it looks bigger than that. Any Southern woodys able to enlighten us?
https://www.stuff.co.nz/national/crime/123874234/man-sets-boat-on-fire-after-latenight-argument 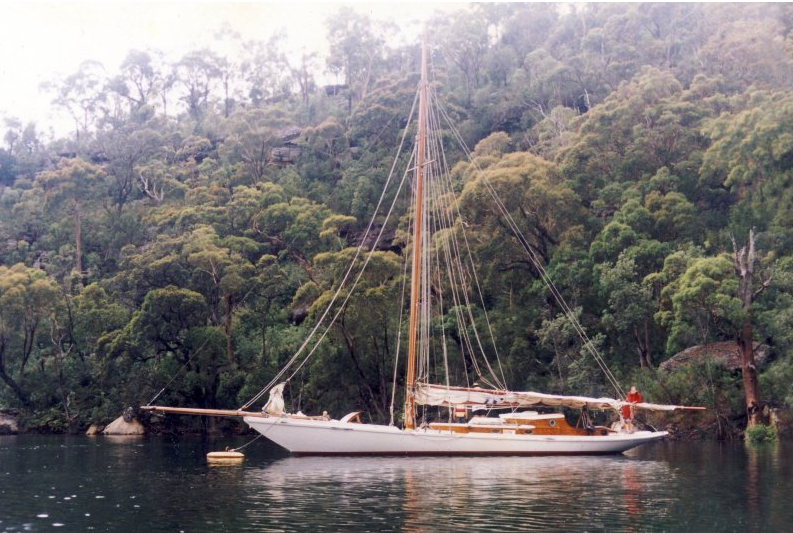 In February Gregor sent me the above photos, with the promise that family members had more & he would track them down, so todays a little bit of name & shame – where are the photos Gregor? 🙂
In the back of my mind Harold Kidd posted a comment on ww a while ago about Ida but I have had no joy tracking it dowm. I can tell you she was built by Bailey’s in 1895, measures 65′ LOA & 45′ LWL. Home is Sydney, Australia & has been for a very long time. HDK – can you help out (again) 😉

Here’s a bunch of owners for Ida. Jim Platt was part of a syndicate that registered her in 1962.

Cornell of Pakuranga appears to be her last registered NZ owner. By 1992 her sail number (11) has been re-issued to Francis

IDA was built by C. & W. Bailey for the Jagger brothers and Frater and launched on 21 December 1895. She was a contemporary and competitor to the other 5 rater of that season, the Logan Bros’ MOANA which had the measure of her from the start. However, when C.P. Murdoch of Devonport bought her in 1900 her performance improved radically. The hauled-out pic above is during his ownership and she’s seem on the beach in front of Garden Terrace Devonport where Murdoch lived. His house, with a turret, still stands. Murdoch was Commodore of the Squadron at this time.
Harold Nathan bought her in 1907, N A Nathan in 1908, J. & W. Smaill in 1911, W. Hicks 1919 and then L & O Jenkinson in 1920. Robin has provided the rest.
She was badly knocked around in the gale of March 1918 on the Devonport foreshore where she had been laid up by the Smaills with her keel removed for several years since the start of the War.
In the 1940s she was seen as very old-fashioned and survived both wars because of the incredible rise in yachting as a sport post-war and the shortage of good yachts to satisfy the demand.

Larry Pardey is/has just relaunched a 25th edition of his world famous book. The link below takes you to Larry & Lin’s very cool website where you can see a great collection of photos of the construction of his ex yacht ‘Taleisin’. I understand that more photos will be added next week, so make sure you check back in 😉 http://www.landlpardey.com/details

The Woollacott (Marco Polo) ketch ‘Rakino’, was recently salvaged by the Wellington Harbour Ranger after its mooring
failed and it sank against the Evans Bay Marina breakwater on the night of
22/23 April 2016.
Rakino is a sister ship to Ebb Tide & Maia II both owned by Jeff Cook. See the Woollacott Association website re the Marco Polo design & the exploits of Tony Armit. http://www.woollacott.org.nz/

Since salvaging on the 24th April, the Volvo Penta engine (about 700 hours)
has been professionally flushed and the starter motor and alternator removed
and flushed. The single skin timber hull appears to have relatively minor
damage consisting of one hole and other apparently cosmetic damage.

Most loose interior items and the sails have been removed (and stored) to
enable better access for viewing and drying.

The Greater Wellington Regional Council wishes to dispose of the yacht by way of a closed tender process and
invites firm expressions of interest.
The tender conditions are below. Note the close of date id May 30th so if you are interested , place a tender, historically some real bargains can be had in these circumstances. 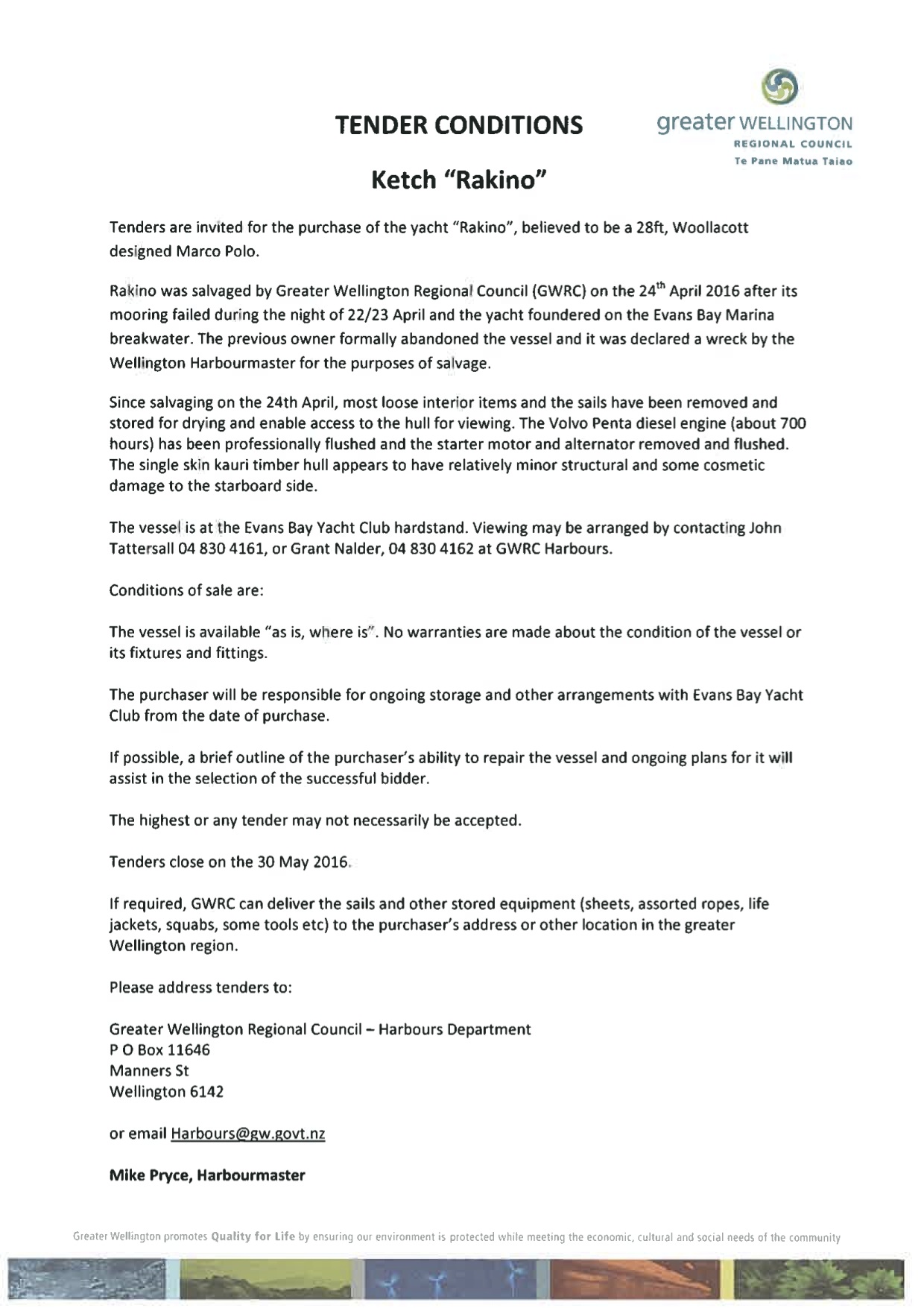