How It Used To Be Done – Launching of Quo Vadis

Todays woody photos come to us from Lance Lange via Nathan Herbert and show the launch that Lance’s grandfather and boatbuilder Phil Lange  built – Quo Vadis.

Quo Vadis was built for the Hopper family.and the photos are from her launch day – must have been a very proper occasion – even had a man of the cloth in attendance.
In the last photo above, I’m assuming the launch to the left od Quo Vadis is Nathan’s – Pacific.

Photo below of Quo Vadis taken in Jan 2020

Todays woody photo was sent in by Nathan Herbert and comes to us from Lance Lange, grandson of boatbuilder Phil Lang, so there’s your 1st clue 😉 Rather a smart looking woody – can we put a name to her?

UPDATE – as advised by everyone and confirmed by Nathan Herbert – the launch is – Waipeke. Photo below ex Ken Ricketts

Wooden Boat Folk Series – today we also get to view latest release from the crew at the Australian Wooden Boat Festival, the video showcases the 1892 yacht – Clara. Launched in 1892 by Thomas Williams at the Domain Slipway in Hobart.

Back in Jan 2016 Rodney Webb, the owner of Florence May had the boat for sale and commented – “I guess you could say i reluctantly have her for sale and would probably refuse any offer” 🙂 Well he must have because in 2022 he still owns the boat (in fact has for approx. 40 years). But she is for sale again and thanks to Ian McDonald and a tme listing we get to have a better look at her and peek down below.

We know from the previous WW story that she was built near Auckland for Harry Muir and was named after his wife. She spent several years in Ngunguru then went to a retired sea captain in the Bay of Islands. She was then purchased by Tom Thompson who bought her back to Tutukaka. Rodney approached him and purchased her 40 years ago.The builder was Phil Lange.

She measures 28’ in length and is powered by a 80hp Ford D Series diesel engine.

DEE 3
Today’s woody bridge-decker was built in the early 1960’s by Phil Lange for Roger Chamberlain of Chamberlains Island and comes to us via tme (thanks Ian McDonald).

Currently located in Napier, can anyone tell us more about Dee 3? 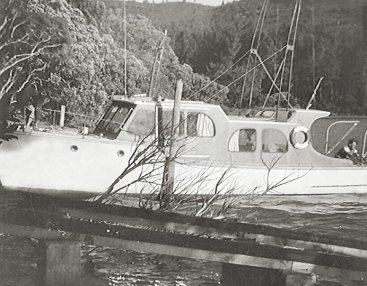 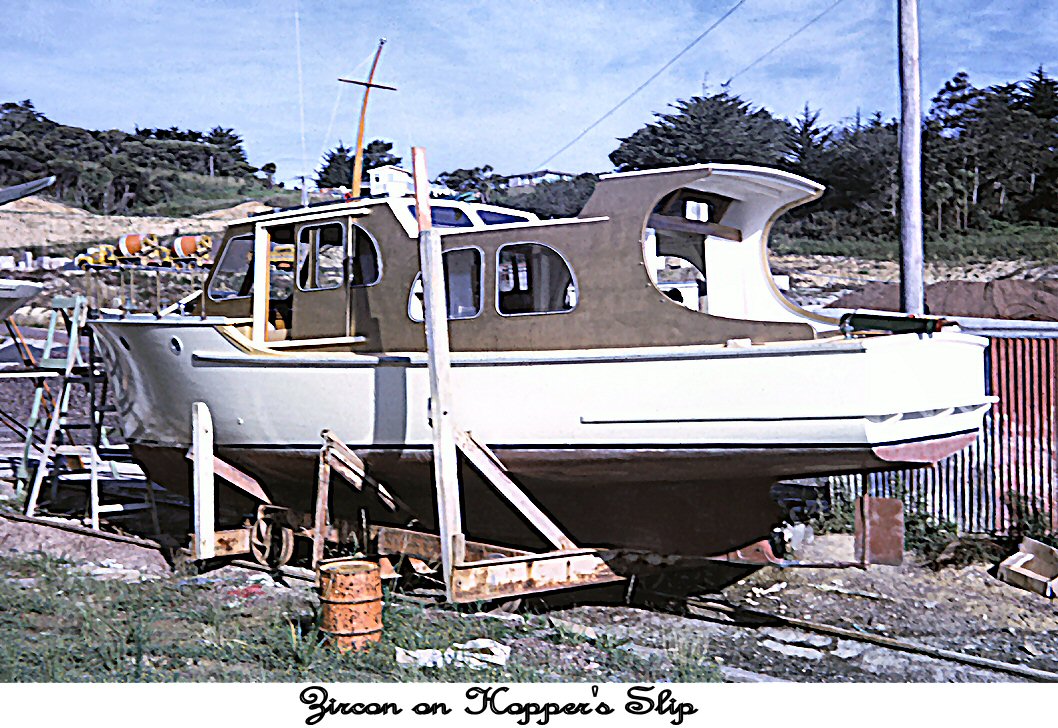 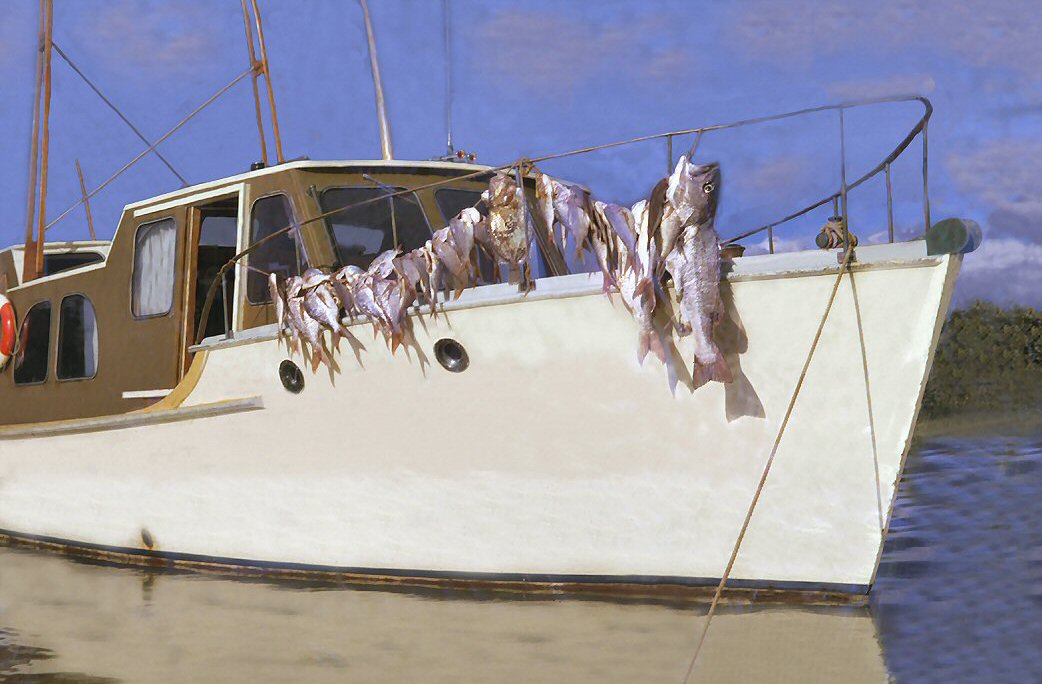 ZIRCON
Zircon made her debut on WW back in November 2015, when she had been purchased by Kevin Peet. At the time Kevin knew very little about Zircon’s provenance, over the next 4 years with the help of several WW readers, mostly past owners, we have ‘unpeeled’ her past. You can read / view this at the WW link below, make sure you read the comments sections – lots of chat there. https://waitematawoodys.com/2015/11/04/zircon/
In a nut seal – she is 34’ in length, built by Phil Lange in 1964, carvel hull and is still powered by her original 130hp, Perkins 645 diesel engine.
Fast forward to last week (Jan. 2020) and I was contacted by Matt Fearnley whose 84 year old father, Don Fearnley, bought Zircon in the mid/late 1960’s and owner her until 1979. Matt lives in Perth and mentioned that he was catching up with his father and  would send in some details and photos from the Zircon’s past – I have reproduced Matt’s note to me below, enjoy the read 🙂

“Well I spent the afternoon reminiscing with Dad about the old boat – it almost brought a tear to his eye. Great stories that I’ve heard a million times before but never get tired of.
Anyway here’s what dad told me that may be of interest :
Dad bought the boat in 1965 from a bloke called Chamberlain from Chamberlains Island? (Probably Ponui from what I’ve read on your site). The boat was called ‘Bette’ after Chamberlain’s wife and had been used to pull the barge mentioned on your site, and also cart sheep to the island. According to Dad the boat had little use and was like new. He paid 4000 pound – and Mum didn’t know until a stranger knocked on her door to say Dad could have the boat! Those were the days. I’d be gelded if I tried that….
Dad renamed the boat Zircon for a simple reason – He was in the coast guard at the time and had a jet-boat he had built at night-school called ‘Zip’ (because it was fast! – photo below of Zip on the trailer behind the EH wagon). Dad had the only boat that started with ‘Z’ in the coast guard, and he liked that hence the new boat had to start with a ‘Z’ too. Hence the birth of Zircon.
One of the photos shows ‘Bette’ at anchor on the Wade River just prior to purchase.
The boat was used for many search and rescues including one near Gt Barrier Island during a bad storm and some damage was sustained to the hull. The story goes that Dad and his mates secured Zircon to some trees at high tide and when the tide went out they were able to effect some running repairs – not bad considering it’s a 12 1/2 ton boat.
Dad had some mods done in Auckland (Milford) before we moved to the BOI where the boat became part of the family, used every weekend for family and the local dive club. More mods done around ’74- ’75 on Arthur Smith’s slip opposite Opua. Dad added the fore-deck and the faux flybridge (no steering or controls) plus some other general maintenance.
Mum and Dad bought a bach at Whangaruru in 1977 and after that the boat sat at the mooring in Opua to be used by seagulls only. It was a very sad day when it sold but we were glad to know it was being re-modeled at Ashby’s boatyard to be loved by a new family.
Thanks for the site Alan. You’ve put a smile on Dads face and he loved looking at the new photos, and to know the new owners have kept the only ‘Z’ in the coast guard.
Hope the above answers some questions the new owners may have.”
The photo below of Te Kouma, is a cracker – lots of woodys there, have asked Matt to check to see if a higher res version of the photo exists.
If Kevin Peet still owns Zircon – sends us some photos 😉 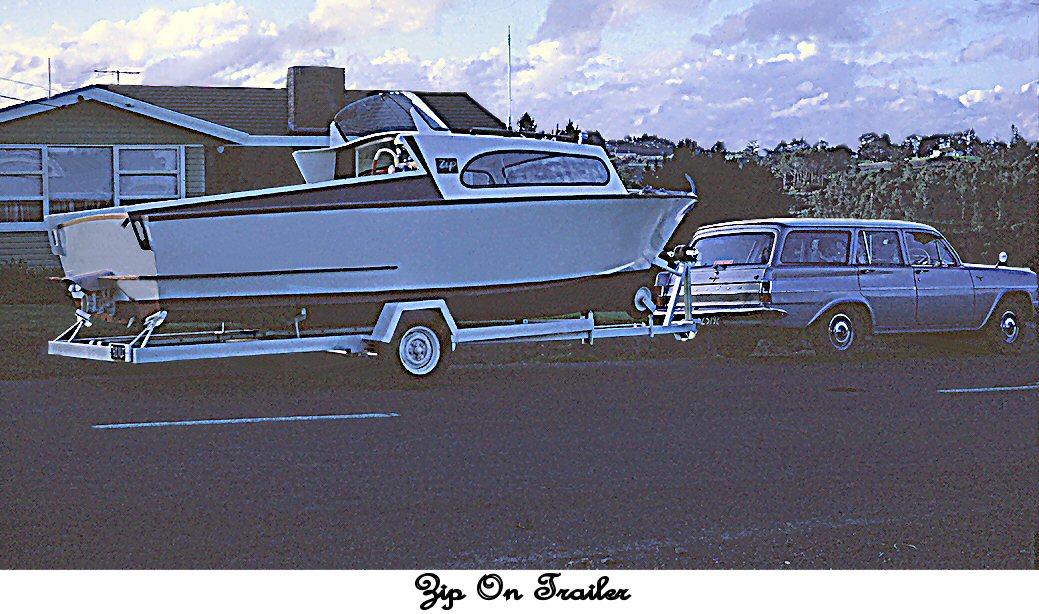 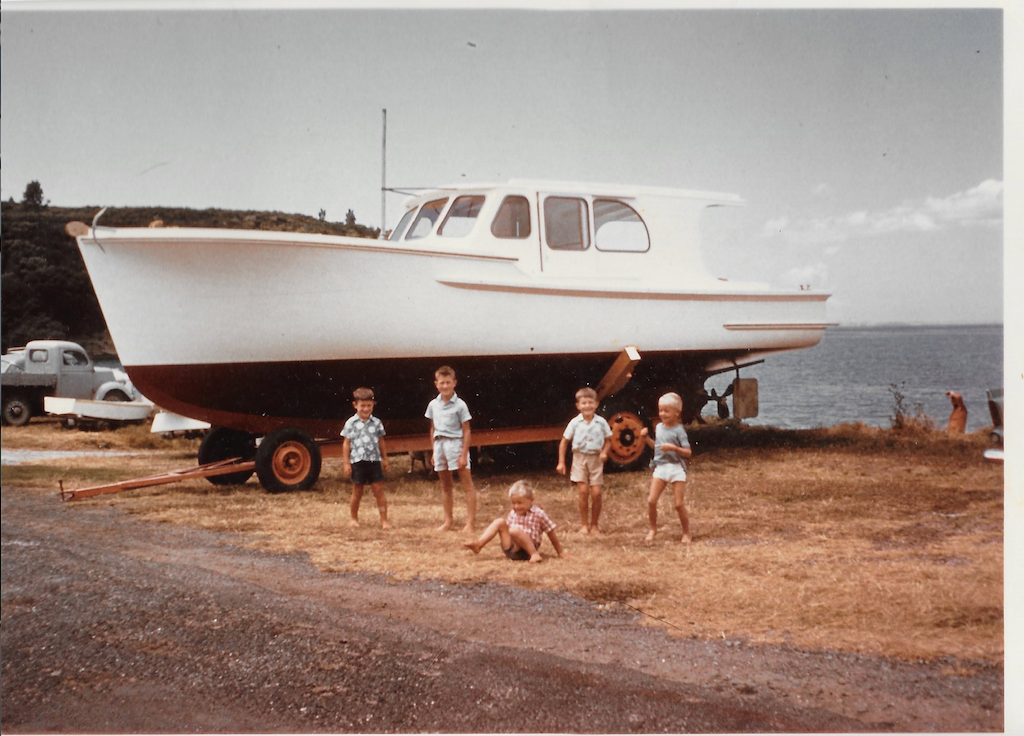 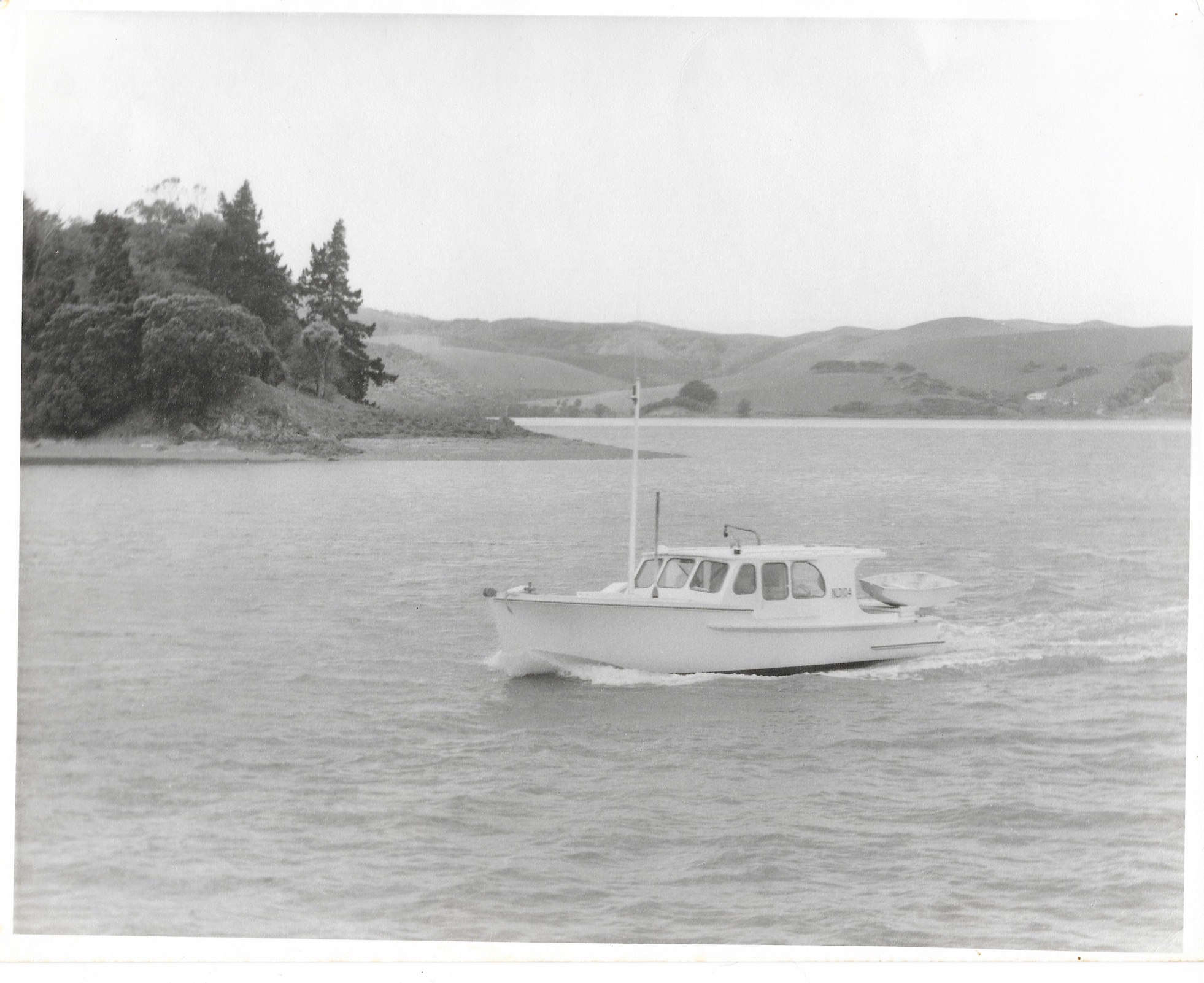 Last week I posted some ‘recent-ish’ photos of the Philip Lange built launch – Faith, now owned by Neal & Nicki Harding in the Marlborough Sounds. Yesterday I was contacted by Sharon Lange with the above photos from the launching & older days up north.

Sharon confirmed that Faith was built by Philip Lange in 1967 and launched in 1968 at Whangaparoa at Matakatia Bay. Philip installed a Kelvin motor in the Faith.

Philip worked the Faith as a commercial fishing boat out of Whangaparoa for a little while then left Whangaparoa, driving the Faith up with one of his young sons – Graham Lange , north to Mangonui , Doubtless Bay. From there he continued to fish for cray fish and longline on the Faith. Philip and his wife Bev and six sons moved to Mangonui where he continued to build other boats.

The Faith was sold to Philips brother Douglas then to Murray Hamilton (both deceased). Then sold to Vick Spaights, after that Sharon does not know any further history apart from the Hardings owning her now .

# The top photo was taken at the launching of the Faith with 4 of Philips young sons and one neighbor’s boy at Matakatia Bay on the Whangaparoa Peninsula.

# The middle photo was taken in Mangonui Harbour by the wharf heading toward Mill Bay mooring.

# The bottom photo shows Faith heading towards the Mangonui wharf. 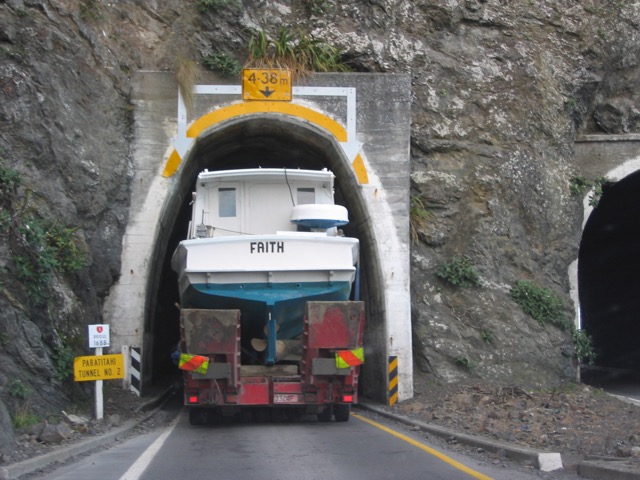 I was contacted recently by Neal & Nicki Harding who had just came across an article in waitamatawoodies about the Phil Lange built boat ’Tui’.
The couple own one of his 30′ boats ‘Faith’ built in 1968, they bought Faith in 2006 and trucked up from Careys Bay, Dunedin. These days she swings off a mooring at the bottom of their garden in the Marlborough Sounds where they live. They met Phil Lange briefly a few years ago. Faith has very similar lines to Phil’s other launch, Tui, but without the flybridge.
The 2nd photo above shows Faith coming through one of the Kaikoura road tunnels in 2006, its a very changed landscape today.

The Harding’s have spent many happy hours restoring, scraping, sanding, painting and cruising with Faith.

The Harding’s have photos of Faith going back to her fishing days in Northland and voyage South to Port Chambers, Dunedin, but are particularly keen to obtain any photos of her for the build / launch period if they exist. I have asked the Harding’s to send in the photos they have so we can all see them.