Following on from yesterdays teaser and results oops – I’m a launch person wont know an L Mullet boat from an H Mullet boat – no one died, its a new day, we move on.The winner of the actual Lipton Cup, hosted by the Ponsonby Cruising Club  – L division (22’) was Orion, 2nd went to Limited Edition, with Tamerau 3rd.The H division winner was Corona. As of Sunday night there were no results posted on the PCC website – so at some stage soon 🙂 go there for details.

There are lots of tales around how the PCC obtained the magnificent trophy, which was crafted by the same jewellers as the Americas Cup – you can read more about the history of the cup here https://www.pcc.org.nz/history

I was land based, using a long lens so some are a little fuzzy, but you get the vibe of the day. Sorry if your boats missing – drop me an email and I’ll check the photos, took lots, but some had other boats in the background etc. As always click on photos to enlarge.

Good to see Geoff Bagnall floating around on his launch, must have escaped Gisborne for the weekend 😉
Photos below ex Don MacLeod 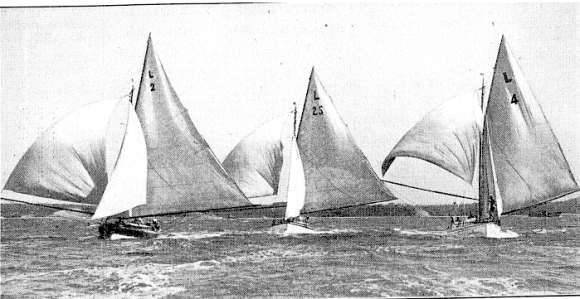 MARIE – A Call for help
photos from PapersPast – NZ Herald

There are very few yachts that so clearly reflect the essence of our kiwi yachting roots, that evoke the memory of days gone by & that rekindle the desire to relive ones past as does the ‘Mullety’ . There iconic yachts are unique in that even today there is a strong active fleet & they are still competitively sailed. The Lipton Cup is one of the events on the sailing calendar & in 2012 will celebrates its centenary.

The purpose of todays post is to plant a seed in the minds of our classic boating community, that hopefully will result in this rather famous mullet boat being on the start line of the 100th Lipton Cup.
How will this happen?  by someone – an individual, a group of enthusiasts & or a corporate sponsor stepping up to the mark & taking custodianship of Marie. Lets be very clear, we are looking for a genuine restorer no dreamers, no gunners i.e. “I was gunner do it but now its in the shed”.

“Errol Fensom has done a great deal to foster and preserve old mullet boats. He still owns the 24 footer MARERE (I1) but, some years ago rescued the 22 footer MARIE (L2) and preserved her for restoration.
Errol reckons it’s time to pass MARIE on to an energetic restorer or syndicate of restorers, so she’s available for free to a good home.
Her history is impeccable.
Roy Lidgard built her in 1918 on his return from WW1. He was working at Lane Motor Boat Co at the time and built her in their yard in Mechanics Bay. She was an instant success, eventually winning the Lipton Cup 5 times, 1923-5 and 1930-1. Her owners over the years have included Roy, Fred and Vic Lidgard, Ashton and Berridge Spencer, Milton Wood, Gordon Kells, L.R. Matthews and R.H. Wood, A.L. Barker and several others more recently, all sounding like a Who’s Who of Auckland yachting.
She’s had a strake or two added and the centreboard removed, although the case remains. A lead deadwood has been added of considerable weight and that goes with the yacht, almost enough to recast and provide the 1 ton of internal ballast required by the Restrictions, usually a major outlay. There is no rig.

This is a great opportunity to restore an authentic and important 22ft mullet boat in time for the centennial Lipton Cup race in 2021 which the Ponsonby Cruising Club will most certainly promote widely.

As always ww is interested in more photos & details so if you have any – send them in.

Update & photo from Dennis Rule
I believe I owned this boat in the early 1970’s, approx. 1973 – 1978, although she was then named Vagabond. I was told by her previous owner that she was Marie and the racing history he supplied supported that theory. She was certainly relatively narrow in the beam which I believe was a point of difference in Marie. She had been built up, cabinised, and her rig shortened by then and had a Ford 100E petrol engine with no reverse. The centrecase leaked like a sieve (recall that 1,000 pumps at a pint a stroke was the daily routine when sailing her). I shudder to think that I took my wife and two infants all over the Gulf in her in that condition with floorboards often floating. When I sold her to buy a Southerly 23 I thought she was a gonner, so it is fantastic to know she may have another chance.. I kept her on a mooring at Bucklands Beach (the pics are at BBYC hardstand).
Incidentally my brother Arnold Rule and his son Alan have owned the 26′ mulletty Bluestreak since 1973. I believe there is a story there.
I would love to know if the boat I owned is the Marie.