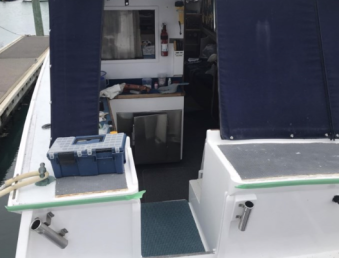 Today’s woody was designed by Brin Wilson and built in 1958 by Dave Jackson, so that makes her a special woody. Carvel planked and measuring 35’9” with a 11’1″ beam and drawing 2’11”.
She is powered by a Moon Engines – reconditioned (2000) Ford 120hp diesel, that sips 7L an hour at a cruise speed of 7>8 knots.
Anyone able to put a name to the boat. I understand her owner has had her for approx. 30 years. Its Mandalay (thanks Geoff Bagnall)

Ngaire
The above photo was sent in by Lake Rotoiti (Rotorua) boat builder Alan Craig. Alan spotted the photo of Ngaire on a recent trip to the Maritime Museum in Mapua, Nelson. At the time Ngaire was owned by Jack Marusich and he is waiting for a load of sheep to be rowed out to the boat. I have to saw the sheep look remarkably relaxed given the trip. The photo caption commented that they were most likely used to it and were probably being relocated to fresher pasture.  Given the load it must have been a great dinghy.
Anyone able to tell us more about this launch?
And speaking of great dinghies – check out Martin Howson’s new clinker below, built late 2019 by Dave Jackson. She measures 8’ x 4’6” and It is built out of ply and ribbed and riveted, there is no glue. Her ribs are  North American white oak, the breast hook and the quarter knees are oak, the thwarts are kauri and knees for the thwarts are oak as well
The oars at 7 ft and Martin commented that you can really put your back into rowing or just tack it easy.  The floor boards are scribed and are easily removed
for cleaning and again they are made from kauri.

Southern Star has made the odd cameo appearance on WW in the past but now  thanks to Dean Wright’s camera, we get to see her ‘in-the-flesh’.
SS is owned by Craig Pippen and for a long period she lived at the Milford Marina, Auckland but these days home is Opua in the Bay of Islands.
SS would slide into WW via the Spirit of Tradition category, but unfortunately I can not tell you much about her – hopefully today will be a quiet day at Cater Marine in Opua where Craig works and he will jump on-line and share some details with us 🙂
If you are in the city later today (5pm >), drop down to the RNZYS Dinghy Locker bar for a post race drink with the CYA yacht fleet. Its day 1 of the CYA 3 day Classic Yacht Regatta and most of the fleet will be rafted up at the rear of the Squadron, so it’s a great opportunity to see some of the classics up close, with a beer or glass of Lawson’s Dry Hills wine in-hand.
Input from Murray Deeble – Southern Star ex Ma Cherie from Smelting house bay Kawau , Dave Jackson design and build

Input from Craig Pippen (owner)“Looking to transition from sailing to motoring after the big OE we found southernstar for sale at Kawau (in an unfinished condition). Having previously commissioned Dave Jackson to build a smaller version, the 32ft Telstar, it was an easy decision to purchase her.

As Kathy’s father, sailmaker Sandy Harold had owned a yacht named Southern Star(and to keep the “star” theme going we renamed her. The name change was done in the correct time honoured manner.

Thanks to Dave Jackson for building such a good boat and to Dean Wright for the great photos.
Cheers Craig. PS- it is always busy at Cater Marine” 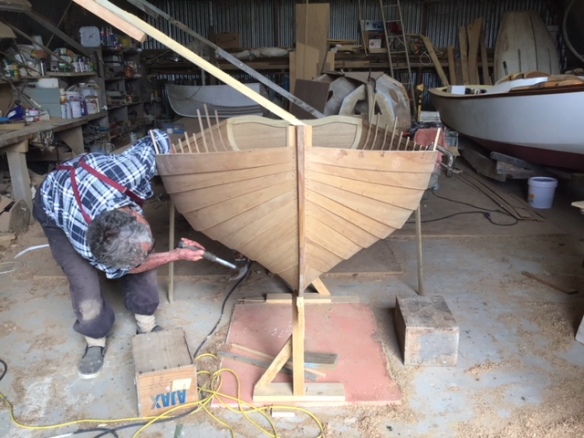 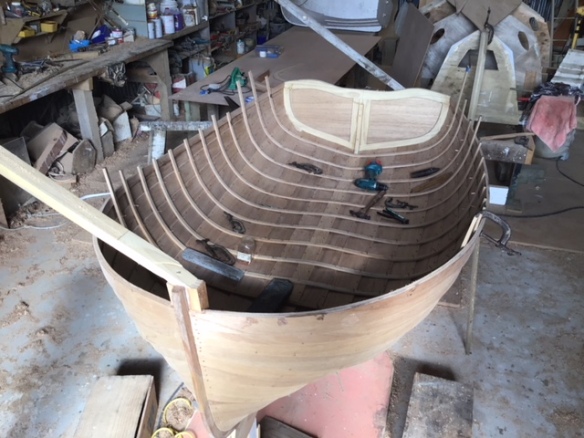 A Peek Inside Dave Jackson’s Shed

Woody Dave Walker recently sent me these photos of Dave Jackson at work in his Warkworth workshop.
In the above photos we see Dave working on a 8’ clinker (ply) dinghy of his own design, in the background (more photos below) is a 16’ day-sailer he built, again own design.
It’s great to see that such a talented man is still turning out fine craft. Dave would list is age as 80+ so well done I say. The dinghy looks ace. 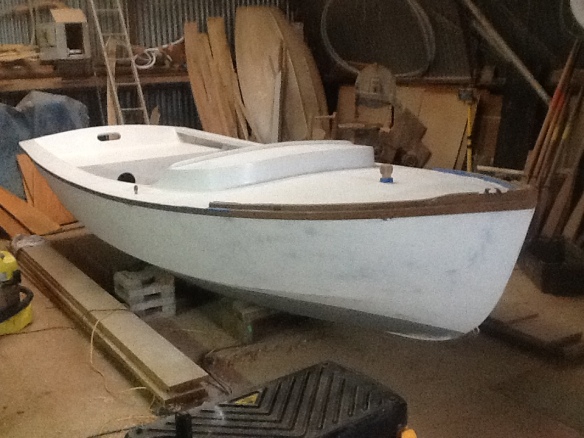 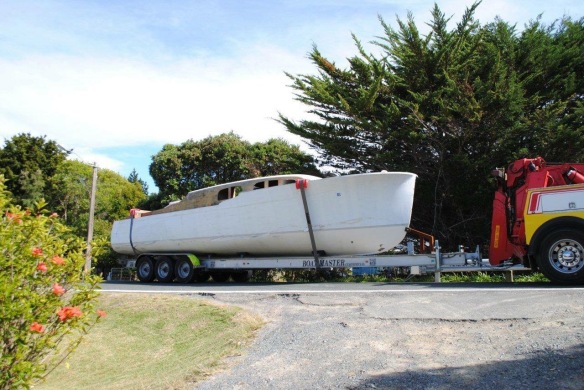 Laughing Lady’s owner James Dreyer, has kindly made an offer to loan his beast of a trailer to anyone starting a restoration & needing a trailer.
It currently has Jason Prew’s – My Girl onboard (see below) but will be free very soon.
The trailer can easily deal with 35′ x 10′ and 12 tons.  Pintle eye type trailer hitch.  New wheel bearings and great tyres.
Disclaimer is the air brakes are not operational nor is it road legal.  It has covered Tauranga > Whangateau > Auckland with ease behind a large truck. James is happy for the bunks to be modified as & where needed, as long as it is returned to as found when done.
Anyone interested can contact James as below:
jamesdreyer@hotmail.com