ROCKY BAY CYA LAUNCH RACE
Saturday was one of those days that started out looking good, turned crappy (on lots of fronts), got better and then finished average. A gallery of photos above – launch race and in the bay, not a great day weather wise for good photos.
From a launch view point, it was the first launch race in the CYA’s summer racing series and excuse the pun – it got off to a rocky start e.g. start boat broke down and had to call Coast Guard for a tow. Jason Prew deputised me into starting the race, only 4 boats so that was easy. Then 3/4 of the way into the race I got a call from the CYA finish boat, “running late, won’t be there to take finish times”. Bet they weren’t late for the yacht finish…………. Alan Good on Lucille was given the job of recording the times and these were relayed to Jason Prew who calculated the handicap results. All that aside Lucille, Kumi, Ngaio and Meloa all  played well together and crossed the line in that order.

As a woody treat for the launches WW arranged with Waiheke residents Tim Evill and Mark Stratton to secure access to moorings in the bay for the night – thank you Mark and Tim 🙂 Several more launches cruised down but conditions in the bay were ‘unpleasant’ so they and it would appear a large % of the yacht race fleet, either went else where or headed back to the city.

Along with the mooring access came an invite to attend Happy Hour/s at the Rocky Bay Memorial Cruising Club, with a 3pm start time it was perfect timing for a catch up before the CYA prize giving in the village hall. The club rooms are perched on/over the western end of the bay and a pleasant time was had by all. The club has a very cool, new t-shirt – details at link below
https://www.rockybaycruisingclub.co.nz/for-sale

We had to be back in the city later in the evening, so departed the club around 6pm, collecting CYA secretary – Joyce Talbot, who also needed to be city-side. Trip back was very average but the company was good.
SCORE CARD Weather – 4/10 Organisation – 2/10 On-The-Fly Recovery 11/10 Hospitality – 10/10

I posted a few weeks ago about a 14′ clinker motorboat, built in 1914 by Miller & Tunnage that was heading north, in fact to Waiheke Island, Auckland.
You can read all about the history behind the boat here  https://waitematawoodys.com/2015/06/23/classic-clinker-motorboat/

It all started when Tim Evill called me & told me he had bought the clinker off trademe & he was having the boat & her trailer trucked up to Auckland. A few days later Tim & I have borrowed my wife’s ute, she’s a landscape gardener 😉  & Tim & I are driving around Penrose looking for a freight depot. We hook her up & head off to Bayswater to launch her, the plan being to put her on a berth at the marina for a week to take up (been out of the water for 2>3 yrs). You know what they say about plans – ‘if it can go wrong, it will’ – we backed her down the ramp & straight away the water starts p_ssing in – big time, a bucket & a big manual bilge pump could not keep up. So before she sank we started the single banger motor & did a few circles in her & popped back on the trailer.

Time for a team talk, I suggest to Tim if she was mine I would be taking her up to Pam & George at the Whangateau Traditional Boat yard & letting her sit in the back tidal estuary for a few weeks. So Tim heads back to Waiheke & the boats parked on my front lawn.

Next we borrow the ute again & head off on a road trip to Whangateau. We safely deposited her into Pam & George’s experienced hands, then I had a mission dragging Tim away from the shed & Laughing Lady (the boat not Pam). Over the next few weeks Pam sent us photos & trip reports (laps of the bay).
Tim collected her this week on a totally foul day & caught the car ferry to Waiheke Island. Home is now Sandy Bay so keep an eye out her.

Now I’m sick of calling her ‘the boat’, ‘she’ etc – so how about we suggest a few names for her – with Tim’s surname (Evill) it could be amusing – the best one wins a ww t-shirt.
And b4 you say anything Jason P, I have yours on board Raindance & will give it to you at Patio Bay. Just finalizing the logo & will be printing more – details soon. 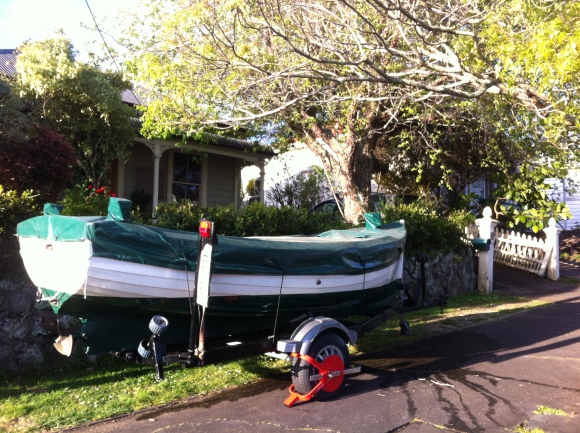 Got to love those front towballs 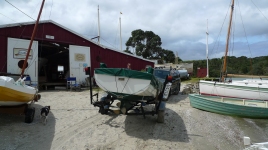 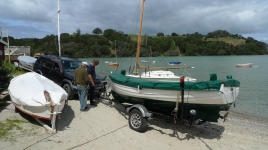 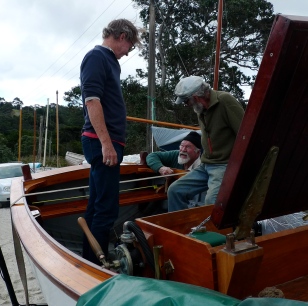 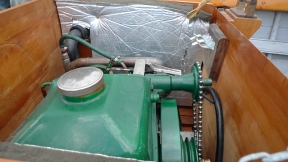 On Holiday at WTB 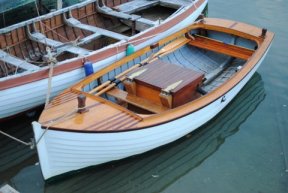 At Home At Last 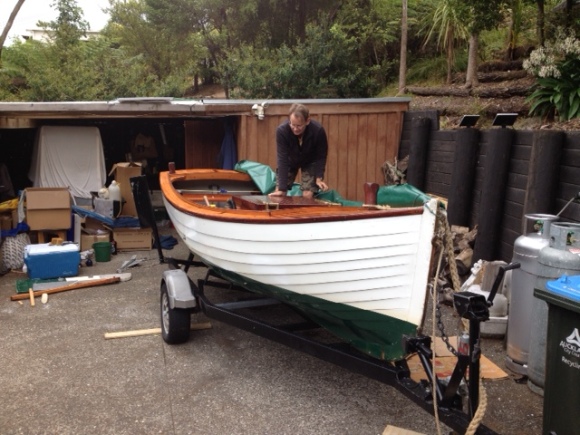 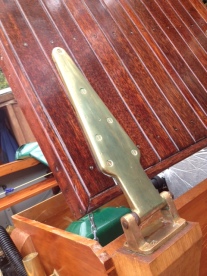 Post an application of the magic Houghton bronze polish