Happy boat-less Easter woodys – seems so odd to not be a float. I hear the boys in blue were sniffing about the marinas today – hope you were all behaving.
Today’s quiz is in three parts – review the photos above and tell me:
1. The name of the boat
2. Her ‘claim-to-fame’ re ownership / use
3. The photo location
As always – entry is by email only, to the address below. Entries close 5pm 10-04-2020. In the event there is more than one correct answer, there will be a draw.
waitematawoodys@gmail.com
Thanks to Nathan Herbert of the photos.
The boat is Sunbeam, she was the first Auckland Police launch and the location is the start of Onewa Road, Northcote. – No winners
Another photo below. 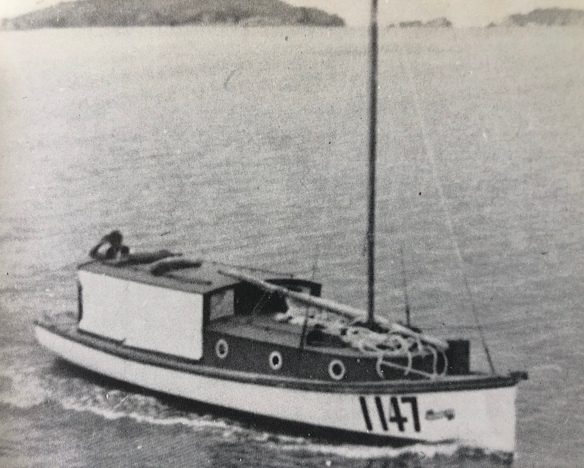 The photo above (ex Auckland Museum Winkleman collection via Lew Redwoods fb) is captioned ‘1900s “Sunbeam” on the slip’. I know nothing about her but she looks very slippery.
Hopefully one of the woody rag & stick boys can tell us more about her.
Trademe Finds
I spend a lot of time trolling the archives of trademe for anything wooden boat related & buy a lot of ’stuff’. Yesterdays courier van visit, dropped off a copy of book titled ’Selected MotorBoat Designs – Volume 16’. It was first published in 1934 & contains complete designs & building instructions for 35 motor boats of many styles. While the cover is very faded, the interior is mint, particularly the sets of line drawings.
Will give me something to read today, given the the CYA Patio Bay weekend was cancelled.

Other than the name, I know nothing about Sunbeam/Sea Breeze – so any input would be greatly appreciated.

There are/were many SUNBEAMS and SEABREEZES, all over NZ. I had a look at that website to see if there’s any information on the boat, where the image was taken etc, but couldn’t find my way through it very well. I kept recoiling at some of the stuff in it, though. Thank goodness WW has peer review processes.

The image is very tiny, but if the launch was photographed as-built, she dates from the period 1920-1928, probably early in that period because the dodger is relatively modest in size.

She looks remarkably Bailey & Lowe to me, but could equally be Dick Lang or a dozen other Auckland builders. Sam Ford is a possibility because he inherited Lang’s moulds and plans when he bought Dick’s business and turned out Lang-style boats until he shifted to Ellerslie and went ultra-modern.

Perhaps the most likely candidate is the Taupo hire launch SUNBEAM of the 1920’s onwards about which I know little but the Drakes will.

Oddly enough there was a SEABREEZE built by Jas. Reid in 1909 and a SUNBEAM built by Bailey & Lowe the same year. Both would have had to be heavily modernised to look like this. That SUNBEAM is currently alive and well in Picton.

This photo was taken by my father or grandfather in the late1930s and is part of the Drake collection. The location is Boat Harbour in the Western Bays on Lake Taupo. She is tied up alongside the old steamer Tongariro which used to run between Taupo and Tokaanu at the southern end of the lake. Tongariro was converted to fisherman’s accommodation on the opening of the road between Taupo and Tokaanu when her services were no longer required.

Sunbeam was built by Sam Ford, date unknown, for Sid Blake and plied for hire on the lake. 36 feet long, 8 foot 6 inch beam and powered by a 4 cylinder Gray Marine petrol engine. She had a galvanized iron lined engine room to be able to ply for hire. Was one of the first boats on the lake to have a two way radio. Sold to Donald Hunt in 1939 and plied for hire out of Tokaanu until 1952. Left the lake possibly in the mid 1950s.

In the 1980s she was moored in Pilot Bay, Mount Maunganui, and had been used as a fishing boat. Her name had been changed to Sea Breeze and cabin had been changed markedly. In the 1990s she was rebuilt by Tauranga boat builder Barwich Harding and now resides in the Tauranga Marina.

SUNBEAM, from the sheer upwards is an almost exact replica of my Bailey & Lowe ROMANCE II (and their 32 footer ROTOMAHANA), same seven clerestory windows, same treatment of the dodger. That’s simply because ROMANCE II was a high-profile fast launch, built to race, and represented the height of style and practicality in 1919. This postwar, post-‘flu epidemic period was a time when few launches had been built since late 1914. People had had a chance to think about what they wanted their post-war launches to look like, to provide in the way of headroom and volume, and how they were to be controlled. The ultra-smart, racy-looking raised-foredeck flushdeckers of 1912-5 were no longer built and most existing ones were easily and speedily modified to get the new look.

The hull of SUNBEAM does appear to have a “knuckle” in the sheer at the bow which is uncharacteristic of Bailey & Lowe.  Ken considers it to be a hallmark of Sam Ford. It is certainly strongly reminiscent of his family’s Sam Ford-built JULIANA (formerly WIDGEON, apparently, but of unknown other history). I don’t totally agree with that and make the point again that Ford churned out Dick Lang launches for some years after he took over Lang’s business in 1923 when Dick went to Sydney (mind you he was back soon afterwards, building at St. Mary’s Bay again, alongside Sam).

So is the “knuckle” Sam Ford or Dick Lang???

It was only shortly after this that the US “express cruiser” and “bridgedecker” forms and styles gained attraction and we got LUANA and LADY UNA, for example.

By 1928, say, this 1919-style in ROMANCE II and SUNBEAM, with clerestory or “tramtop”, a minimal dodger and aft-control was becoming very dated, giving way to “sedans” and bridgedeckers of US inspiration.

I see that the Taupo boat history site states that “SUNBEAM was built by Sam Ford in 1936 for Sid Blake”. Two things are wrong with that which muddle the situation;

2. According to newspaper reports, SUNBEAM was a hire launch on Lake Taupo from at least December 1926.

In fact I have now zeroed in on her as being built by Sam Ford for Blake in early December 1925 and fitted with a 25-35 Model V ohv Gray. I was fooled because the newspaper reports said that Blake (of Taupo) was going to use her for troutfishing on Lake Rotorua. I wonder if she spent a few months at Rotorua?