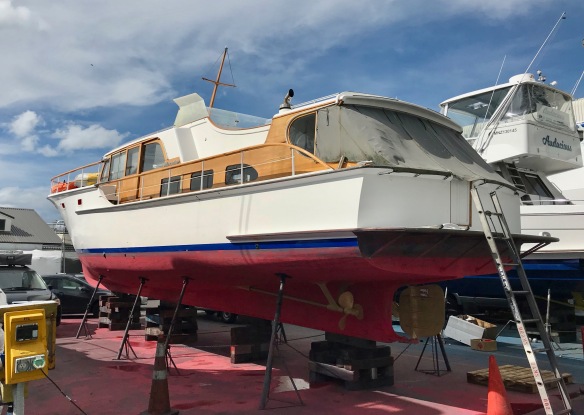 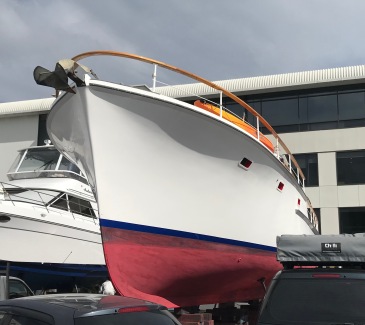 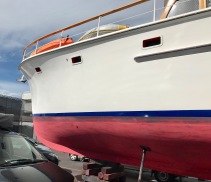 Must be the week for the big girls, yesterday we had a feature on the 56’ Turongo coming onto the market and today we see the 1961 Lane built – Marnine.
Marnine measures 50’ and has a 15’ beam and weighs 25 tonnes so very similar in size to Turongo.
Marnine has made numerous appearances on WW – links below. The first one contain a great insight into her past from Terry Porter, son of her original owner Fred Porter.
Today we see her hauled out in Auckland for some TLC.
https://waitematawoodys.com/2013/06/13/marnine-2/
https://wordpress.com/post/waitematawoodys.com/2854
MULLET BOAT MAST SOS
The boys at The Slipway Milford have a 22’ mullety hauled out which given her existing masts is in 3 pieces and looks like a shark has had a chew, there is an urgent need for a suitable replacement.
Not fussy if its wood or alloy – anyone got one up in the rafters? Contact Jason Prew jason@slipway.co.nz 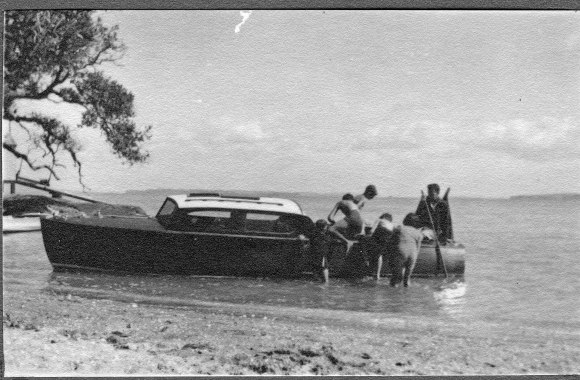 Her actual build date is unclear, but Fred’s son, David Porter, told Ken Ricketts he had been told he was taken away on her in 1943, when he was 3 weeks old, so she was built pre 1943. Terry Porter, David’s younger brother, feels she was probably built by Garth Lane or his father.

Wanda is approximately 26′ long & was powered by a Ford V8 petrol engine (most likely marinised by M & P) & was very quick for her era.

The above photo was taken at David’s grandfather (founder of the M & P) Reuben Porter, family home, on the water’s edge at Beachlands.

She was later replaced by Wanda II, built new c.1948 by the Lane Motor Boat & Mason & Porter. Then in 1961 with another Lane Motor Boat / M & P built launch, the 58′ Marnine & then again later with the luxury 68′ aluminum motor yacht Simran built by McMullen & Wing, which is now based overseas.

Keen to find out what happened to Wanda post the Porter period of ownership. 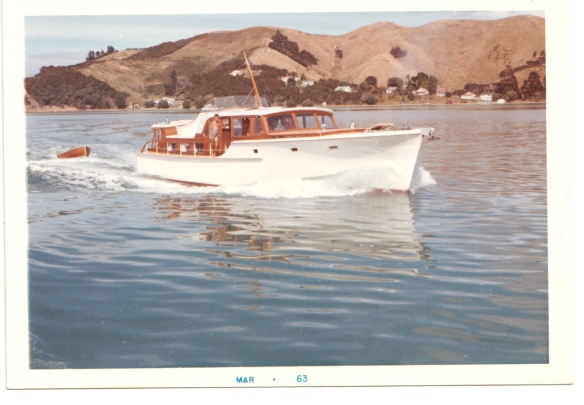 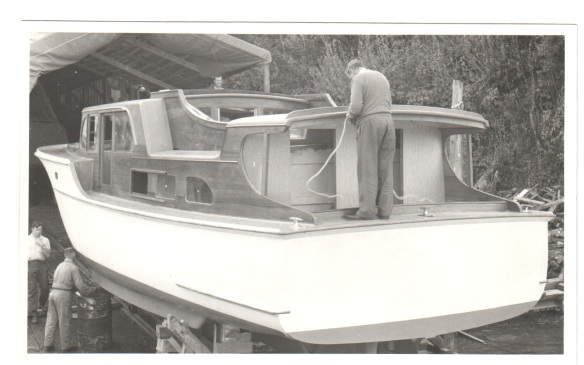 MARNINE
Story & photos from Terry Porter
The name ‘Marnine’ is an anagram of Margaret (Joan Porter’s mother) and Janine (Fred and Joan’s only daughter after four sons).  ‘Marnine’ replaced ‘Wanda’ to cope better with a bigger family.
Dad and Garth Lane were good friends.  ‘Marnine’s’ lines were based on Ted Clarke’s ‘Lady Margaret’.  Mum and Dad were great friends with Ted and Margaret (Uncle Ted and Aunty Marg to us kids though no relation).  Dad liked ‘Lady Margaret’s’ sea-keeping characteristics so took control of the design of ‘Marnine’.  ‘Wanda’ rolled!  ‘Marnine’s’ styling and engineering design were all Fred’s work;  done in house at Mason & Porter with help from Ralph Ricketts and others (in particular Jack McLeod).
‘Marnine’ was launched at the end of 1961;  being 46 feet long with 4 feet added not long afterwards.
Contrary to some thinking, the boat performed OK as it was but the extra 4 feet would provide more bunks, a bigger head and more storage up forward.  A benefit was that ‘Marnine’ cruised and looked better.
‘Simran’ was also lengthened from 58 feet 3 inches to 64 feet.  This time on the stern and she too cruised and looked better.
On reflection, it seems most boats should be designed and then have 10% added prior to construction.
Photos
– B&W at Lanes Tamaki River being launched to have engines fitted across the river at Rothery’s Landing.
– Colour is cruising in 1963 prior to being lengthened.  Lack of forward handrail indicates pre-lengthening.
Note: to view more photos, just enter Marnine in the search box
08-05-2018 Input from Peter Wheeler – Regarding extending the bow.I was an apprentice at lanes at the time and helped Ray Pateman to loft out MARNINE. Ray actually altered the original design and extended the bow. Fred would have none of this and told Ray to go back to the original design. I had left Lanes and was surprised to see MARNINE getting her new bow when I called in to see the lads. She looked much more balanced I thought and saw her a few months ago and pointed out to my friends with me that I spent many a happy time helping to build her. She looked what she is classy. 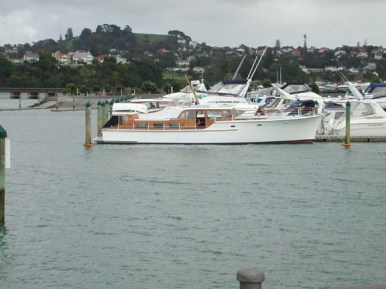 MARNINE
Story & photos ex Russell Ward
Another good looker from Lanes.
I remember Marnine from the early ’60s. Those Fodens that she had were not subdued in the early days!
Fred Porter had her built by Lane Motor Boat Co to (I think) much of his own design. Jim Francis reckoned that Lady Margaret was quite an inspiration in the design. She apparently needed some beefing up in the bow sections and, not long after launching, was virtually opened up from amidships and effectively lengthened.
We were up at Kawau in the very early ’60s and she was very much in evidence for many seasons.
The Porters had a lot of use out of her.
Update ex Ken Ricketts
It is fabulous that at last she has come up in the system, I have been waiting for this, but  until now have done nothing because I have never had any pics of her
I know quite a lot about her early days & was on board several times during construction in Lane’s shed.
As I have said in other blogs, my late father Ralph Ricketts was the machine shop man at Mason & Porter, owned by the Porter family until the later 80s or 90s, for 35 years, & he designed, & him & his staff made virtually all her mechanical & shipchandlery equipment, perhaps like RAKANOA & the Parkers.
Anyway she of course had the 2 x 6cyl Fodens which were the same as L.M.II had, & (which were put in L.M. II at more or less the same time as Marnine was built.
Me dad made a wonderful muffler & exhaust system for both boats, with lovely little short 316 stainless steel stacks, that protruded discretely about 12 inches up, out of each side of the roof of the dodgers of both boats– . Superb & perfect!!
We all know that with GM Detroit, Foden, Graymarine, & Commer TS3, diesels, it was usual that if you were at Kawau, you could hear boats coming round North Head in those days, however with L.M. II & Marnine, you could virtually not hear a sound.
In Schoolhouse Bay, Kawau Island, one still morning, during a Christmas cruise, ins me own boat at that time, FLYING SCUD, with MARNINE next door, & noticed 2 momentary tiny white puffs of smoke, one out of each stack, & then Marnine just glided totally silently out of the bay, — beautiful!!!
Ok, I digress, CONSTRUCTION & DESIGN;
She was originally built 6 or 8 feet shorter than she is today, & when dad saw her for the 1st time under construction, he said she would never go properly as she was much to bluff or full in the bow. This is exactly what happened, & as a result of this Fred P. had Lanes add  6 or 8 feet to the bow — a very difficult expensive & unusual place to add length, however I have another story I will relate later, about the SOBRINE built for the late Gordon Mace, where G. Lane did the same thing, & also later added to SOBRINE’S bow the same way.
Once these additions were made, this has made her a fabulous craft.
Must mention the interior finishing & craftsmanship.
She was built very much in the era of “formica,” & had masses of beautifully crafted natural timber cupboards & storage compartments, as well as the interior itself being virtually all natural timber finish, (the timber was very light in colour & may have been oak), with teak combings of course, & every cupboard was fully lined with formica, & even both sides of the cupboard shelves, were veneered formica, to avoid any possibility of them buckling, with just a single side done this way.
The Porters owned MARNINE for many years, & as Russell said, used her a great deal, eventually replacing her with their 80 foot Alloy motor yacht SIMRAN, built by Mc Mullen & Wing, a company which they later bought.
Porters & the Ted Clarkes were not only friends, but almost certainly “best friends,” for many years, & once Marnine was built, they shared the same shed in Whakatakataka Bay, for maintenance of  the 2 boats.

Dec 2013 – she is in Brin Wilsons shed at Gulf Harbour & Ken went aboard & reports that she is in absolutely original in every detail, — the 2 x 6 cyl. Fodens still looking immaculate under the bridgedeck floor & the underwater fittings appear in still perfect condition.