Another Jack Brooke drawing, published on ww thanks to son Robert for making them available to ww followers. Jack produced a hand drawing on each cruise. Today’s post is the 21st featured – this one shows the Xmas 1969/670 cruise aboard Kiariki. Not sure of the actual length of the cruise as Jack has only plotted on the ‘chart’ to Kawau Island & back. But other entries indicate a longer cruise. The fishing must have been good, the size of the snapper illustrated normally indicates the catch. I’m not sure the message in the line “The curse of the Manaia got us again” – upset stomach (under cooked food) or something else, I’m sure Harold Kidd can answer this.

The above photo is one from the Jack Brooke collection & shows Tuarangi  out at the Barrier in the early 1950’s. The Brooke family in ‘Judith’ was cruising in company with Tuarangi which was owned by Bruce Winstone who was with his wife and three children. Robert Brooke remembers Bruce rowing across one evening to tell Jack that as the weather forecast was good, they would be off to Whitianga first thing in the morning. The next thing they heard was that Tuarangi had blown up while refueling at Whitianga. Luckily the family had gone shopping for provisions, and Bruce was the only person on board. He was quite badly injured and was not well for a long time.

So folks todays questions are:
1. Does anyone know what happened to Tuarangi & where she is today?
2. Who designed & built her?

Update
I had an early morning txt from Nathan Herbert, saying that he thought there had been a oops in the boat name. I placed all the blame on Robert 🙂 ,  who supplied the photo tagged as Wairangi. Given the comments today we can safely assume it is Tuarangi. Post headline has been changed. See details below from Harold Kidd.
TUARANGI was built by Lidgard Bros for H.S. White and launched on 25 November 1950. She was 42’x40’x12’x4’3″ and originally had twin 90hp 6 cylinder Redwing petrol engines. White sold her to Bruce Winstone in 1951.
By 1959 she was renamed SILVER FIN and owned by Dr. R.L. Kennedy at Tauranga. George N. Hale owned her in Auckland in 1964 by when she had been re-engined with twin Ford Lees Marine 4 cylinder 64.8 bhp diesels.
Barbara Cooke had this to add –  Bruce Winstone had a Frostbite which was carried on the cabin top, the name being Wairangi. Both Bruce and his son Jeff were injured in the blast. After re fueling someone lit the stove to boil the kettle causing the explosion. Judy Salthouse (nee Brooke) recalls the event well. 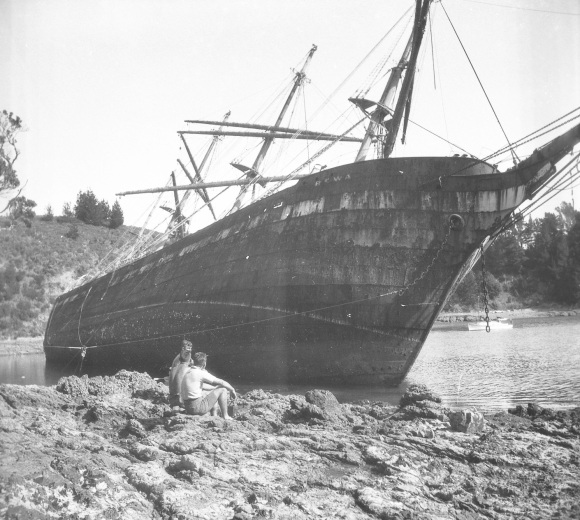 REWA – the wreck photos ex Robert Brooke The 3 photos above  of Rewa at Moturekareka Island are from the Jack Brooke photo collection, sent in by son,Robert.Taken not long after she was beached. Anyone able to ID the motor launch in the photos ? a little trick – if you click on the photo & them click on ‘view full size’, then move the magnifying glass icon over the photo & click again (once only) you will get a really good look 😉 To read more about the island & the wreck click this link https://petertasker.com/2011/places/hauraki-gulf/moturekareka-island-hauraki-gulf-new-zealand Click the video link below to view the wreck today

Photo below of the AHB tug Te Awhina positioning Rewa at her grave site. Not well positioned as it turned out 😉 The photo was sent in by Russell Ward who received it from the late Bruce Fletcher & was taken by his father.

Photo below taken by Ken Ricketts in the 1950’s

Another Jack Brooke drawing, published on ww thanks to son Robert for making them available to ww followers. Jack produced a hand drawing on each cruise. Today’s post is the 20th featured – this one shows the xmas 1967/68 cruise aboard Kiariki & Defiant. A lot water under the keel on this trip – Kawau Island, Bay of Islands, Whangaroa & Great Barrier Island. It appears there was a little fire incident. Crew list below – you’ll note there was a mutiny* post Kawau 🙂