The Legacy of Bill Orchard

Today we share a great kiwi boating story from your woody friends at WoodenBoat magazine in the USA. Penned by kiwi journalist John Eichelsheim.

INPUT ex Mark McLaughlin – SABRE is now Auckland based and is well kept at the OBC Marina. GLENMORE was one of the Pelorus Sound mail boats throughout the 1980’s to mid 1990’s, operated by Ken and Dianne Gullery. She was sold to an Australian owner and is now moored at Pittwater up Sydney’s north coast. She did the Tasman Sea crossing under her own steam from Picton, which is no mean feat for that type of boat.

The photos below of Glenmore in her orange hull livery during the mail boat years are from the Old Marlborough fb group page, and the photo of Glenmore on her mooring at Pittwater is from Lew Redwood’s fb page.

11-11-2022 Input ex Eric Sanderson – I believe the vessel below is one of Bill Orchards, was on the Kaipara when photo was taken

KATHERINE  4SALE & ON DISPLAY @ WESTHAVEN MARINA – THIS WEEKEND – BY INVITATION

Considering an upgrade or a boat for summer – the 38’ Conrad Robertson designed classic – KATHERINE, has been relocated to Westhaven Marina for one weekend only – inspection by invitation. 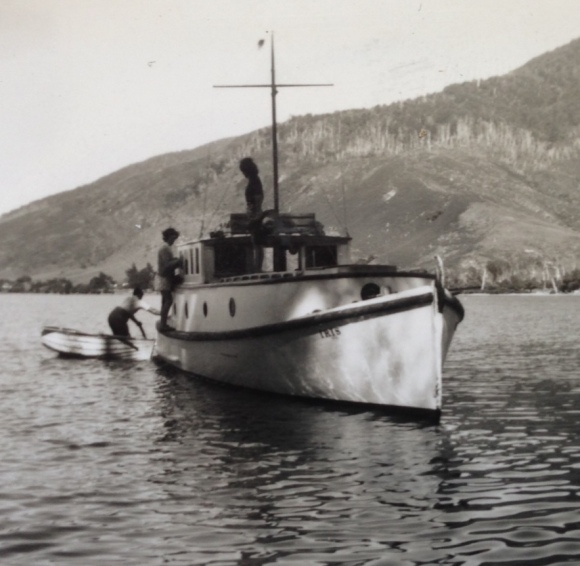 Chris added that she was sold to the Orchard family for fishing duties mid 20th century (ish).  Later while at Picton in the 1960’s she suffered a major fire while apparently the gearbox was being cleaned out with petrol.  Some of the fuel spilt into the bilge and caught fire from some dodgy bilge pump wiring.  After the fire Bill Orchard hauled her out and stripped the hull/house so she looked like a big canoe.  She was rebuilt with a couple of extra planks all around, new deck and new house.  Hence the big change in her lines from the oldest images to the newest.

Chris thinks Iris was sold to Athol Sadd of Blenheim in the seventies and was used as a commuter between Picton (later Waikawa) and his property in Ruakaka Bay.  Apparently Athol had a bit of a scare with a rail ferry in in the fog one night/day and within a few days the ‘starship enterprise’ radar scanner arrived.

In 1986 she was re-powered from the 471 GM that Bill Orchard put in her to a 671 Detroit (she has a size able engine box in the aft cabin).  The engine is rated to 180hp at 1800RPM.  Peter Rothwell fabricated the running gear having a 2 inch 316 SS shaft with a 4 bladed 26/24 Nalder and Biddle propeller.  She goes really well such that the propeller holds the engine at a whisker over 1750 RPM (with prop speed). The prop has a bare 3/4 inch between the blade tips and the hull –  a bit of copper sheathing is required there..  Economy wise, she burns about a litre a mile at about 12 knots.  At 1800RPM with flat water, a clean bum and no passengers she can touch 16 knots.

Mark Rogers and Chris bought her in partnership in 2009 and have progressively refitted her.  Chris said she will never be ‘finished’ but she will steadily improve, his quote is ‘Boat Finished > Man Die’ 🙂

Iris also has a sister ship, the Mavis, which is alive and looking very nice in Havelock. 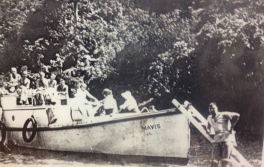