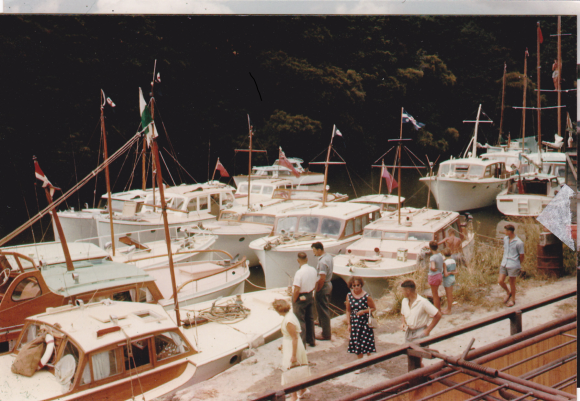 Todays post show 2 photos taken c1961, most likely at Xmas & show a collection of launches tied up at the wharf at Warkworth. The really neat thing is hat most of these craft are still a float today & in as good, if not better condition.
It would be nice to see some of those varnished coaming again 😉

Several of these launches will be at todays Mahurangi Regatta & weather & numbers interested – maybe making the trip up the river to Warkworth for lunch.

Ken has attempted to ID the launches – see below.

Top left row, tiny bit of bow too small to indentify next to wharf next is
Cherokee & next is Menai. Ken can’t identify outer boat of that group

Far row to right –  boat at wharf is Southern Belle, may have been owned by Stan
Blundell, the outer boat next to her is Lady Karita.

His first foray in to cruising type boats, was Reelemin (II). She was built by Don Norton in Westmere for Norm F., c.1954-55.

She is 26 feet long & was originally powered by a largish petrol engine, which Norm does not recall the details of. She cruised at around 12-14 knots.Norma owned her until  approx 1961 when he sold her & replaced her with the new & larger 38 foot Challenger, in approx 1962, which he commissioned McGeady to build for him & which will be the subject of a later post. This was followed later still by the even bigger 45 foot (llater extended to 52 feet) Commander One, in approx 1968-69  which was built for him by Alan Williams, also to be the subject of a later post.

Fairlie also had McGeady build him a purpose built 30 footer called Tempest, which was built for him in early 1964, specially for the World Game Fishing Contest (March 1964), on which he won the Tuna section, of that contest.

He had retained Challenger & owned both boats at the same time. Challenger came second in the game fishing section, but unfortunately, Fairlie has no pics of Tempest & he sold her shortly after the contest concluded & does not recall engine details of this boat.

Norm is now long retired, at 91 & when Ken spoke to him, sounded very fit & active for his age & living at the Gold Coast.

He was a very successful Auckland businessman & father of one of NZ’s world famous international tennis stars of the 1960s-70s era, Brian Fairlie.

Ken would like to acknowledge the help, input & permission of Norm to make this & the future  posts on his other  boats possible.

The pic below of Gay  Dawn was taken by Norm from Reelemin at Opua Christmas 1960. His in-laws are standing on the stern & a young Brian, outside the portside bridegdeck window. 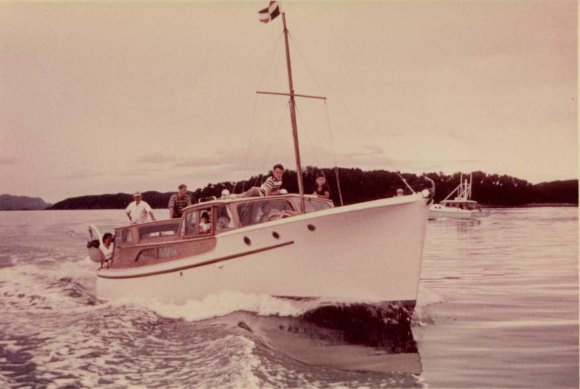