Today’s woody is named Flossie and the photo comes to us via Paul Drake. Paul commented he uncovered the photo recently and that Flossie was at Lake Taupo in the 1950’s. He recalls that she was noted especially for her narrow beam and that one day the young Drake brothers observed her ram the breastwork as she failed to go astern whilst berthing. In the photo the repaired stem is clear to see.

Paul last saw Flossie berthed at Westhaven Marina after she disappeared from Taupo. There is an ‘old’ hull there semi-hiding under several sheets to what looks like plywood 🙂

Can we uncover what happened to Flossie post Taupo and any other details on her. 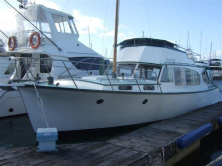 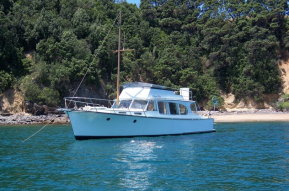 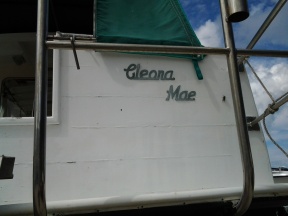 Cleona Mae as built by Brin Wilson in 1962 & is powered by a 6 cyl Ford diesel. In the above (hauled out) photos we see her in Feb/March 2017 at the Sandspit hard stand, where she was getting some TLC. Home of Cleona Mae these days is Scott’s Landing, Mahurangi. Below, her previous owner, Nigel Drake of Tauranga has documented some of her past. Thanks to Ken Ricketts for sending this to me. Special thanks to Nigel for sharing the story. (photos ex Nigel Drake, Ken Ricketts & Brian Worthington). On her launch day she had a wee opps, refer photos below.

“Cleona Mae, was built by Brin Wilson in 1962. Launching looks as though it was in November, as that is the date which is on the original photos of her, having fallen off the trailer on that day.

She was built for Bert Follas, a well known builder in Takapuna. She is named after his daughters, Cleo and Shona, and his first wife Mae. The story as told to me by one of his grandsons, was that Bert knew Brin Wilson quite well, and when talking with Brin one day, during a bit of a slow period for Brin, they agreed that Brin would build Bert a 34 footer. Bert apparently told his wife of the agreement that night!

Previous to Cleona Mae, Bert owned the smaller Cleona, which I understand, is still in Milford marina.

Cleona Mae lived on a mooring in Westhaven, and Bert used to row out from the dinghy storage area, though he did have some trouble climbing over the transom, as he was on crutches from age of about 50. He used to take business associates from Takapuna out to the Barrier. Large bronze bollards are on each side of the transom as he was involved with the Coastguard and used to tow boats home when required.

In 1983 Bert sold the boat to his solicitor, Ian Armstrong. Ian appears to have owned her for only 1 year, as she was purchased by Bill McNutt of Tauranga in 1984. I have a feeling the flying bridge was added in 1983.

I purchased Cleona Mae in 1999. I added the mast in 2003. It had been a flag pole, one of many, on top of the Wellington Harbour Board building. They were removing them and selling them off at the time. I did many trips up the coast from Tauranga to the Mercury Islands, Great barrier and into Auckland.

She is a great little boat.

I sold her to Aubrey Montague, her current owner, in Nov 2012 having purchased the 40 foot Woolley “Freelance” in 2011.

I did the delivery trip to Gulf Harbour with Aubrey.” 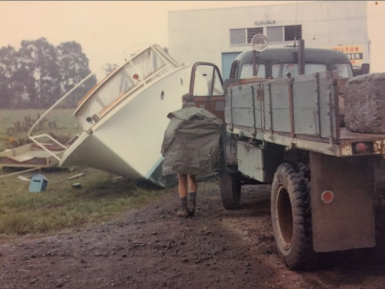