COULD THIS BE RONA
The launch Rona made a cameo appearance on WW in May 2020, link below, but we were unable to expand more on the boat. Yesterday Nathan Herbert sent in the colour photo above and posed the question – are they the same boat. Hopefully the new photo will jog someones memory and we can answer the question and maybe learn more about Rona.

At the time of the b/w photo the location is Whangarei Harbour and the boat was probably owned by the Jagger family. https://waitematawoodys.com/2020/05/23/rona/

I’m speechless…………. below – seriously? Message for Mark Edmonds (MV Monterey), don’t even think about it 🙂 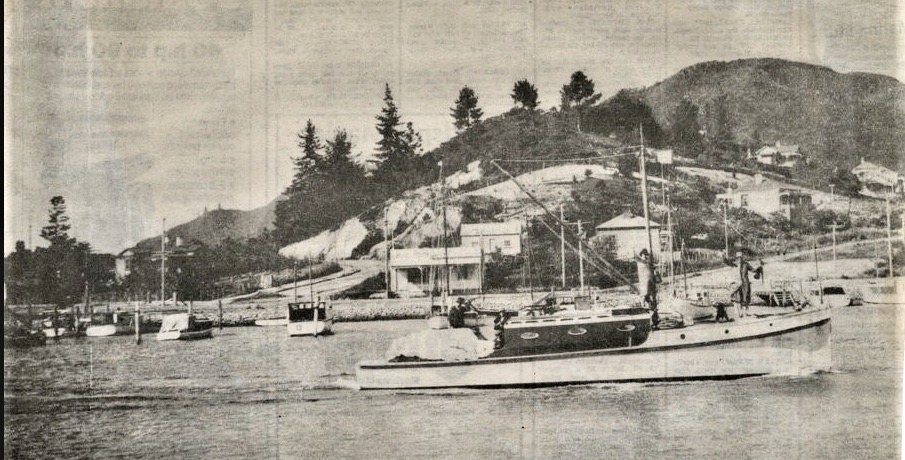 Today we have a photo of the launch Rona cruising on the Whangarei Harbour. A caption records that on board were Harold Jagger and Heather & Muriel Stuart.
I believe at the time the launch was owned by the Jagger family.
I’m slightly embarrassed to say that I know nothing more about the boat and have my fingers crossed that we can learn more about her and where she is today.

This week we see WB editor Matt Murphy interview Sean Koomen. Sean is the chief instructor for the Northwest School of Wooden Boatbuilding in Port Hadlock, Washington. While studying cello performance at St. Olaf College in Minnesota, Sean launched his own small boat shop. Subsequently, he worked on the restorations of several historically significant vessels, including the 138′ steam yacht Cangarda and the 1929 schooner Viviveka. Sean later led the restoration of the 90′ fantail yacht Wanda, and has worked as a shipwright for the San Francisco Maritime Museum and for Brooklin Boatyard in Maine. Sean also talks about his recent extended stay in Tasmania, and the school’s current exploration of online hands-on education initiatives in the age of social distancing.