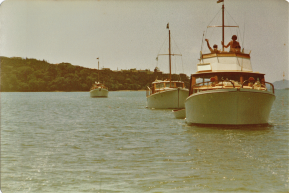 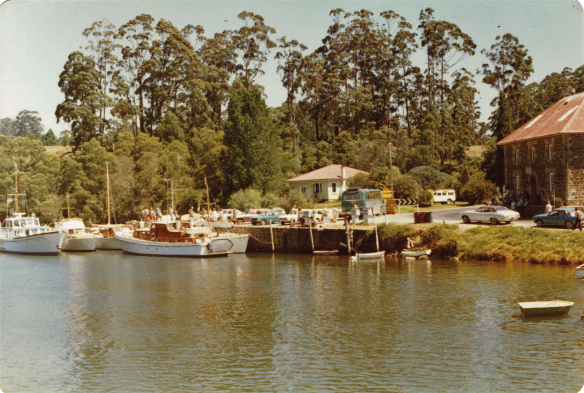 Todays photos come to us from Nathan Herbert and show a small flotilla of woodys that regularly cruised together – the boats being – Kudu, Lynmar, Kotanui, Haunui, and Valhalla. On this cruise Rakanoa was present also but had not made the trip up the river for provisions, she decided to ’stay out’ at anchor.

Nathan commented that Kotanui was always the ‘pilot’ boat for the Kerikeri river being as his grandfather – Jack Hobbs had been up so many times over the years in Pacific, now owned by Nathan.
Dulcie Dennes (Valhalla) told Nathan that on this particular trip, the men were sent up to Kerikeri township to get groceries, and forgot them altogether, instead spending the whole time at the pub. They had to hitch a ride on an orchard truck back down to the Stone Store basin, a few sheets to the wind…  I understand not all the men were guilty – Jack and Harry Julian had stayed at the boats to keep an eye on them.
Yesterdays Best Caption Competition
The comments section on WW only ever goes a maximum of 15 (the last 15) comments, so I have reproduced them below. Given Flora’s on / off relationship with the boys in blue – her winner is Matthew Drake.

Click to view / enlarge the below 🙂 Thanks for all the entries