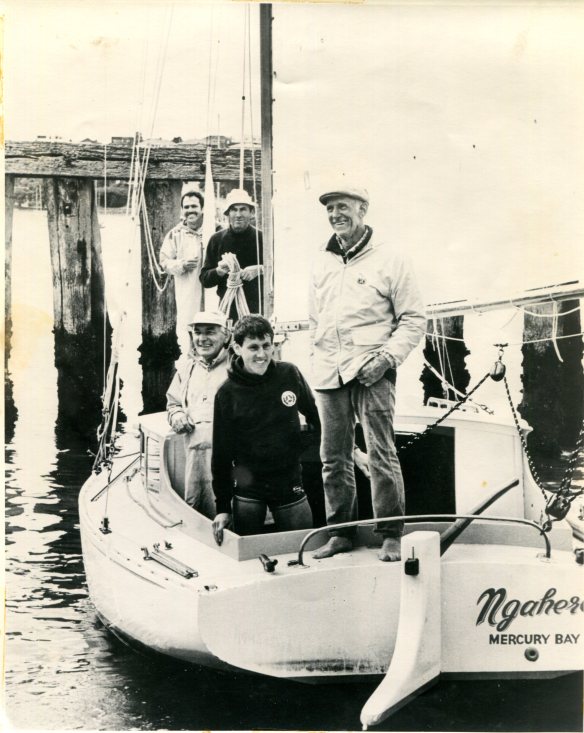 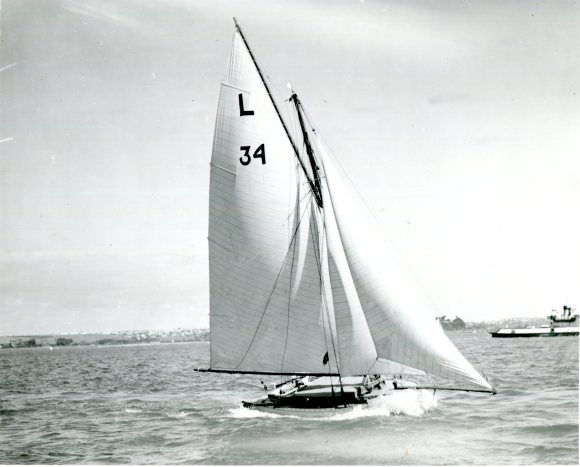 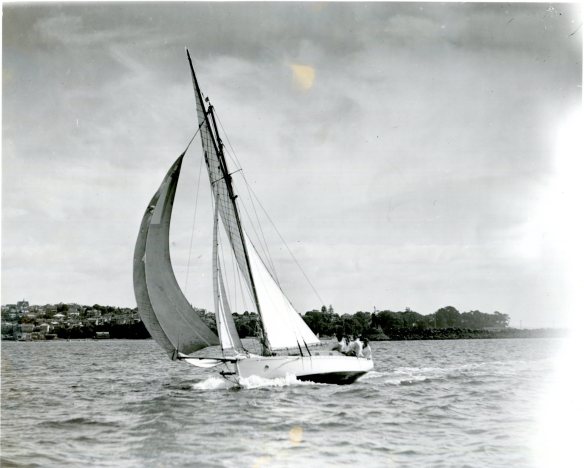 NGAHERE
The mullet boat Ngahere was built in 1938 by the Graham Bros. of Otahuhu. Baden Pascoe believes that she may possibly been named Zamira (L 34) when built or renamed. She was owned by Billy Matthews for many years. Baden’s father, Howard, bought her in a rundown state in the 1980’s and replaced several ribs and had her in very tidy condition. Her mast was cut down to its original length and Frank Warnock supplied new sails. Howard sailed her to Auckland for several Lipton Cups and AAR events.
Baden commented that Howard loved racing centre board boats and while Ngahere was never a champion boat, under Howard’s command she performed well at all of these events.
In the top photo we see – Howard Pascoe, Baden Pascoe, Owen Bray, Keven Pascoe, Puka (Les) Pascoe.
Any of the rag and stick woodys able to tell us more about Ngahere?
Update 1 ex Simon Smith – photo below of Ngahere (today 19-04-2020) at The Slipway, Milford. 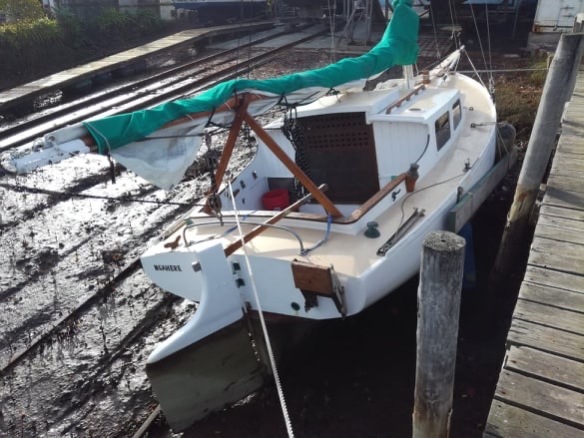 Update 2 – Photos below sent in by Jason Prew (The Slipway) and owner, Chris Harris 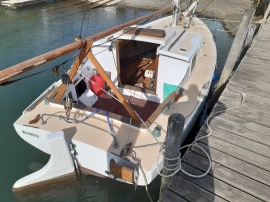 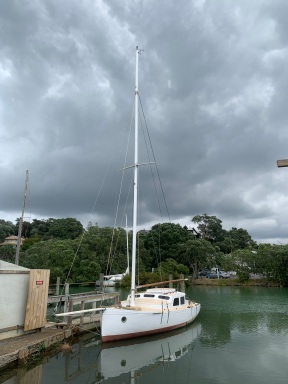 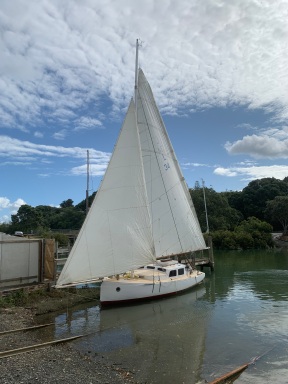 Update 3 – Harold Kidd Input – NGAHERE was built by J Graham at Otahuhu for his son Scott Graham in late 1939 as ZAMIRA the Russian for “peace”. Because of the war, she didn’t do much racing. Her first race appears to have been at the Tamaki Yacht Club on 13th December 1940 followed by the Lipton Cup representing the Otahuhu Sailing Club on 25th January 1941 (3rd) then the Anniversary Regatta when she was on scratch. It looks like Billy Matthews changed her name to NGAHERE around 1945.
21-04-2020 Input es Janet Watkins –With the 100th race for the Lipton Cup coming up I have been compiling a dossier on all the L Class and every Lipton Cup Race sailed over the century from old Club records, newspaper reports, magazines and sailors but there are still gaps.
Of Zamira / Ngahere I have this information. Zamira was built by Graham Bros Otahuhu and launched in 1938. She raced for the Lipton Cup in 1941-fin 3rd and in Jan 1946. Her name was changed in late 1946 to Ngahere and she raced as Ngahere for the Lipton Cup in Dec 1946, ’53,’54,’58,’61,’62,’63. (There were 2 Lipton Cup races in 1946 being of 2 seasons but none in 1947) She was still reg. with PCC 1966 &amp; ’72. In the 1970’s she was reported to be at Coromandel. From WW I now know she was bought by Howard Pascoe in rundown state 1980’s, new ribs and rig fitted. Howard sailed her to AK for Lipton Cup race/s. I have yet to locate all the entry and race details for the 1970’s &amp; 80’s – can anyone help?Now looking spruce in Milford Marina and owned by Chris Harris. (Thank you WW) Will she be joining us for the big Lipton Cup Centennial, hopefully, in March 2021? Unfortunately, the Lockdown stopped the sailing of the 99th Lipton Cup which the Ponsonby Cruising Club is waiting to reschedule!!Who was the original owner? When did Billy Matthews own her? Who were the owners and skippers during the Lipton Cup races?

21-04-2020 Harold Kidd Update – The 1938 date is a canard gleaned from “Mullet Boats ‘n Quotes” at page 46. Newspaper reports of the time say she was under construction by J. Graham of Otahuhu for his son Scott Graham in September 1939. Scott Graham was her original owner and raced her until the 1941 Lipton Cup when she was described as “new” and then in the Anniversary Regatta a week or so later.
Billy Matthews was shown as owner in the APYMBA records for 1946.
Graham Cole of Karaka Bay and L Good owned her in 1946. They sold to Ross Weaver of Whangarei c1948.S Hammond of Regina St Grey Lynn owned her in 1952. S Daniels of Webber St Grey Lynn in 1953. M Aitken of Mt Roskill in 1973. Ray Esdale Northcote c1980 followed by Howard Pascoe of course.

I don’t think she actually went into the water until some time in 1940, hence the ‘new’ tag in the 1941 Lipton Cup Report. I have an unconfirmed note that J. Graham and S. Graham were respectively the father and brother of Mark Graham the Kiwi rugby League Player – but he was not born until 1955, so I am not sure.

Regatta Programmes:
Billy Matthews entered her as Zamira in the 1946 Anniversary regatta, she came 6th across the line from 12 starters. He entered her as Ngahere in the 1947 Regatta so the name change was ‘possibly’ from the start of the 1946/47 season although he could have changed the name the day before the placed his regatta entry in January 1947. 🙂
Messrs Cole &amp; Good enter her in the 1948 and 1949 Regattas, R. Weaver in the 1950 Regatta.

After that, darkness descends as the Auckland Yachting Assn stopped publishing their year books (or rather no one has given me anything after 1973.)