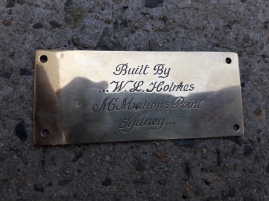 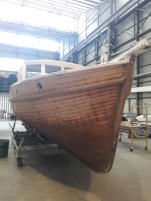 Naiad & Nifity – Woodys From Across The Ditch

On recent work travels Adrian Pawson came across the very salty wee ship Naiad. Adrian was able to uncover that she is currently being restored by Pete Messenger  in a shed at Woolwich Dock in Sydney. She was apparently built locally in approximately 1949 by W.L Holmes at the McMahons Point boatyard in Sydney. She is planked in Oregon timber with a spotted gum keel. LOA is 28ft.

Recently she was sold in derelict condition as part of a deceased estate. Her new owner has commissioned a full refit including splining and sheathing in glass fibre. She currently has no engine.
The timing of the email from Adrian was a little scary as I had just received an email from Australian woody, Andrew Christie, who owns the stunning launch Folly III that recent appeared on WW via a youtube video. Andrew sent me details on the 21’ ex woodys work boat – Nifity, she was built in 1962 by Norman Wright & Sons.
Andrew commented that Nifity was an ex ‘line boat’. Line boats had the job of collecting the ‘lines’ from incoming ships & bringing the lines ashore, at the same time as the bigger tugs were manoeuvring the ship.
Check Nifity out on the video below.
https://www.youtube.com/watch?v=wVnmp63jwow&app=desktop
UPDATE ON WAITEMATAWOODY T-SHIRT ORDERS – RESPONSE HAS BEEN HUGE, SO HUGE I WILL BE CLOSING THE ORDER BOOK EARLY – LAST DAY WAS NOV 30TH BUT I HAVE AMENDED THAT TO TUESDAY 27TH. IF YOU ARE THINKING ABOUT ORDERING, DO IT NOW. DETAILS HERE
https://waitematawoodys.com/2018/11/13/

1 thought on “Naiad & Nifity – Woodys From Across The Ditch”