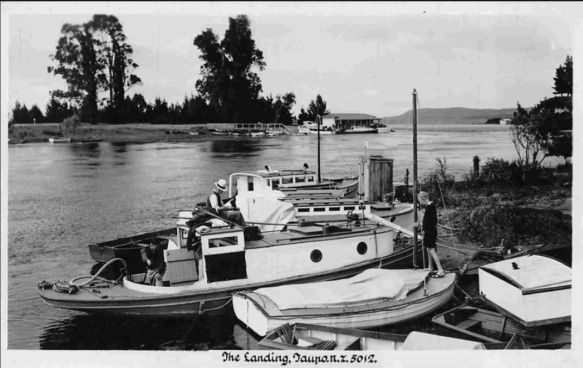 Lake Taupo Launches At The Landing
The above photo comes to us via NZ Vintage Postcard fb and is captioned – The Landing, Taupo and is possibly from the 1930>1940’s period.

A question for Paul Drake – is the boat ‘closest to the channel‘ your 1914 Bailey and Lowe launch – Romance  ? If so, that would date the photo post 1931.

Can we ID any of the other boats?

Input from Paul Drake – Yes the launch nearest the channel is ROMANCE, still at Taupo and owned by the Drake Brothers. She arrived ex Napier post 1931 earthquake as a flush decker, and had her cabin raised when acquired by Jack Taylor and put to work as a commercial boat, probably in 1932. The counter stern boat is KINGFISHER. Thomas Ryan ran the 60 foot steamer RMS TONGARIRO ( Bailey and Lowe 1899 and built at Taupo) until 1925. She eventually rotted away on the foreshore between the Boat Harbour and Acacia Bay – photo below at the Taupo Wharf, before the 2 storied cargo shed was built , so quite early on in the 1900’s.

Input from Nigel Drake – The boat between Romance and Kingfisher looks to be Waihora, about 23 feet in length and probably a Couthard built boat, (not to be confused with the Brin Wilson built Waihora). She was on the lake for a long period of time and ran for hire under local identity “Tabby” Tabernacle.

POHUTUKAWA
Lock-down = less going out = more fires, so collected a load of firewood today, life is easy when there is an arborist in the family 🙂
While at his yard, I spotted this magnificent pile of Pohutukawa logs, the coffee cup is there to give you an indication of the size of the 12 logs . A huge tree came down in a recent storm, blocking a road so out with the big chainsaws. Not destined for firewood, I’m told a few coffee tables and bar tops.

8 thoughts on “Lake Taupo Launches At The Landing”