I recently received a note from Andrew Hewitt from Ashburton, concerning his 22’ yacht Merlin. Andrew became custodian of her three years ago, when she was put up for sale by a broker on behalf of her former owner’s widow (Peter Beaven, a notable Christchurch architect and heritage advocate).

Peter had had her hull restored professionally in Christchurch some time previously, but the earthquakes and his ultimate death intervened. Andrew completed the job, rigged her and commissioned a trailer for her locally. So she’s now, home from the sea in her retirement – converted for use as a ‘trailer-sailor’ and lives protected from the elements in a boat shed at Lake Hood (just east of Ashburton) – where Andrew sails her when time allows.

Andrew commented that Harold Kidd kindly supplied a little history on her and Les McBean (Dunedin) also did a quite an extensive one (link here Les McBean Merlin), but unfortunately they contradict each other J According to Les, it seems she dates from around 1902 by Mr Derwent Aitcheson of Waikouaiti, where she was originally a fishing boat fitted with an engine. She appears to have been based there and Moeraki, moving about in the general Otago area. At some time mid-century she was converted to a yacht, and was well known in Otago Harbour for some decades, prior to becoming derelict and ultimate salvation by Peter Beaven.

The registration number seems original (V9) – it is on an old cotton sail that came with her.

Like all woodys, Merlin’s restoration is an ongoing thing….. the photos above ange from the fitting out/rigging stage at Andrew’s home to an early pic of Andrew under sail at Lake Hood.

Andrew is keen to discover more on Merlin past, to date he has made one or two connections through the Canterbury Classic Boat meets and tried both the Port Chalmers Maritime Museum and the two yacht clubs down there for info, but nothing forthcoming. The Museum at Waikouaiti knew of the builder, but didn’t supply any info when requested. 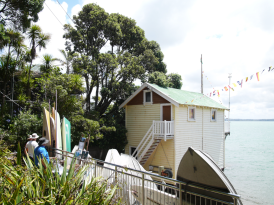 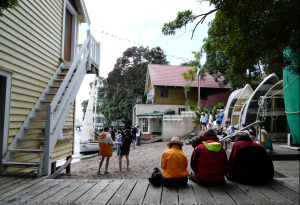 Pencil midday on Saturday the 9th of December into the diary, the Herne Bay Crusing Club are hosting their legendary Centreboard Cup Regatta. Its one of the coolest sailing events in town & the venue is rather special.

And check out my photos from a previous regatta. https://waitematawoodys.com/2015/12/20/whats-the-coolest-yacht-club-10-minutes-from-queen-st/

Anyone Looking For a Wooden Mast?

The Herne Bay Cruising Club have a 31’6″ laminated, hollow wooden mast that needs a home, the price will be very attractive if its for a classic yacht, if you want it as a flag pole expect to pay more 🙂 email Andrew Mason at    a.mason@auckland.ac.nz