1A Summer St, Ponsonby was an unlikely location for boatbuilding, particularly for large launches. The building was built on to the rear of a retail shop, on the corner of Ponsonby Rd & Summer St., Auckland. Summer St was & still is an incredibly narrow side street, dating back to the late 1800’s.
To date on ww we have never seen good photos of the interior of the yard/shed, now thanks to the generosity of Pam Mare, we have access to the above photos. Pam is  part of the Buckby family, that had White Cloud built at the yard by Ben Hipkins, to a McGeady design. Ben bought the Supreme Craft, off Mac Mcgeady. Other craftsman at the yard were boat builder Garry Wheeler & Tracey Nelson, a marine & refrigeration engineer, who did the vast majority of the engine & machinery installations, in the Supreme Craft vessels, — along with looking after all the Ponui Island mechanical work, from  all the farm tractors, power generators, to George Chamberlain’s Lane built, tram topper, Falcon.

Such was the shortage of space at the building, that every boat that emerged, meant ,the picket fence of the house opposite in Summer St, to have to be removed & later replaced, to facilitate the exit from the building on to the transporter.

White Cloud left the shed in June 1965, to go to Fodenway Motors, Penrose, for engine installation & finishing. The photos below show her leaving the shed & later, on route to launching. Sorry for the poor photo quality, stills photos taken from old ‘home’ movie footage,  recorded by Len Buckby or his wife & made available to us by his daughter Pam Mare.
Special thanks to Ken Ricketts for pulling the individual pieces together. 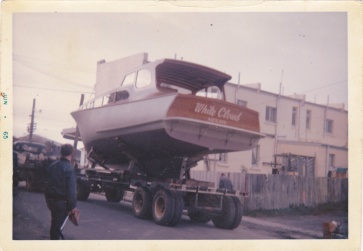 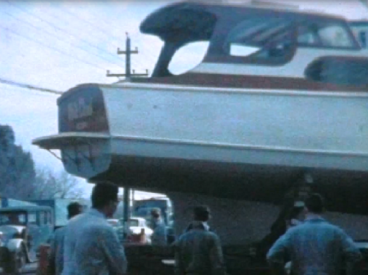 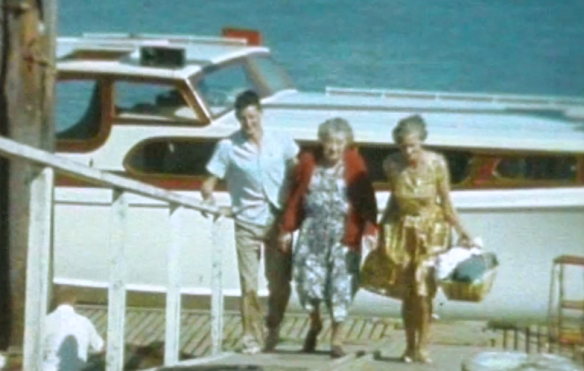