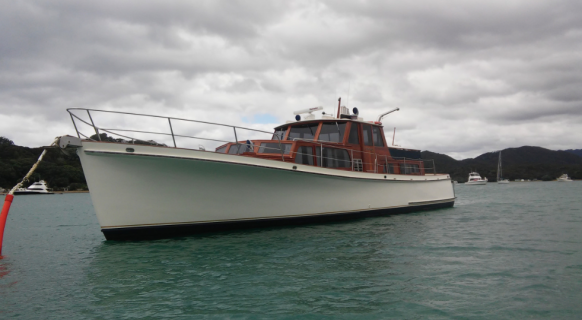 Turongo has had a very low profile on the classic boating scene, as she spends most summers in the Bay of Islands.
Turongo is the biggest of the 5 Colin Wild inspired, John Salthouse built motor-yachts. The term ‘launch’ just doesn’t fit a vessel of her elegance and bearing, she is the Bentley of the wooden boating world.
Her vital specs are – built 1966, one year after Trinidad, 56’ in length with a 14’6” beam, she draws 5′ but unlike Trinidad and the earlier launched Lady Crossley, she was the recipient of at the time, some radical design which sees her only drawing 18”at the stern, this along with her twin CAT 3208 diesels results in Turongo being able to do up to 18 knots under power.
Turongo is a very lucky boat, she has been in the same family for the last 25+ years and been very well maintained thru-out this period. She was originally built for JR Butcher and after launching sat on a mooring for a period of time waiting for her two 200hp Cummins V8’s to arrive from the States both of which had been extracted from a tractor unit. They were installed and fitted out by John Butcher and his son Tony,  both gents were in the engineering business. Even back then with the smaller motors, she had an impressive turn of speed..
In recent times she has received the Uroxsys ‘varnish’ finish.
Well woodys, the headline kind of gave the game away – Turongo is for sale and it really is a once in a lifetime opportunity to own one of the best classic motor-yachts in NZ. Her owner has made the decision to hand the keys to the next custodian – so who will it be?
Whoever it is had better act quickly, her owner is very realistic in terms of price and after making the difficult decision to let her go, wants a sale. Take my word for it, Turongo will not be on the market for long. SOLD