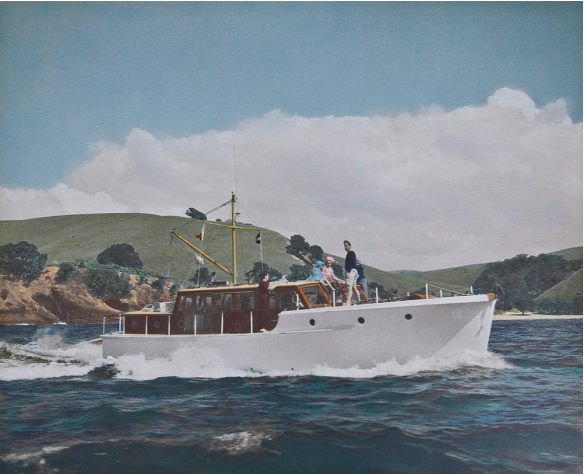 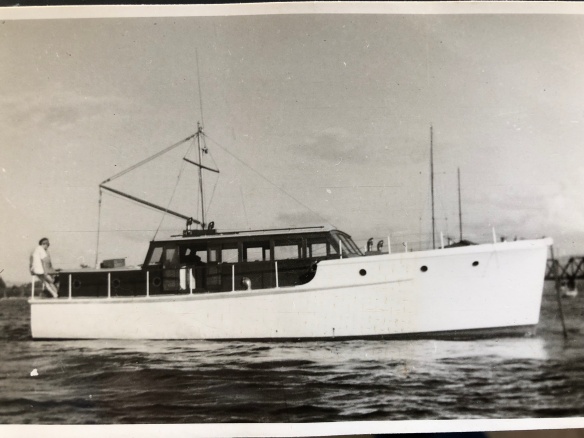 The Story of Marguerite

Some boats are very lucky and others seem to have a hex on them – Marguerite was one of those boats.
On Sunday I posted a black & white photo of the 1948, 42’ Des Donovan built launch – Marguerite on WW as a ‘Mystery Launch’ tease. Surprisingly no one ID’s the boat, she did appear on WW back in 2014 (link below). In this story we read about how she was effectively ’skuttled’ at the back of Rangitoto Island and the subsequent insurance claim / prosecution. Ken Rickets also told us about an oops just prior to her launching, details in the link.
https://waitematawoodys.com/?s=Marguerite&submit=Search
Over the weekend I was contacted by Christoph  Hoessly who relayed ex his mother – Margaret Cooper (nee McLeod) – the story of a grounding off Motuhue Island in 1949 – I’ll let Christoph’s mother tell the story in her words, below.
But the questions today are:
1. Can anyone tell us the name of the culprit that sank her? and what became of them. Was Tom the Torch around back then?
2. Was the boat re-floated and if so what became of her?
Margaret’s story below

“The motor launch Marguerite (named after the owner’s wife) was built in the Ponsonby boatyard of builder Des Donovan in 1948. She was commissioned by my father Ken McLeod of Rotorua and was 42 feet long and built of solid Kauri without a single join.

Usually, the boat was moored at Tauranga but from time to time Ken sailed it up the coast to Auckland.  It was on one of these trips, I believe it was in 1949 that he decided to take it to Motuhue Island because I had a friend who was a young naval officer stationed at the base there and it was decided to take him out for the day.

On board were Ken’s wife, myself and an old friend of Ken’s, Mick Fahey, his wife Zelda and daughter Robin. On the way Ken decided to investigate a minor problem in an engine so he gave the helm to Mick with instructions to head for a certain headland. Within about 10 minutes there was a terrible thud. Mick had misinterpreted Ken’s instructions and the boat had hit a rock.

It started taking on water and Ken hunted in vain for what was obviously a hole in the hull. It eventually transpired that it was under a locker in the bow and almost impossible to reach. Meanwhile the situation required removing all but the two men from the boat to the island and seeking help as fast as possible.

All the others were put in the dinghy and I rowed them ashore. The rocks all over the beach were hard to navigate in bare feet but eventually I reached the naval station where I found the captain hoeing his vegetable garden! He was immediately galvanised into action to try at least to tow the boat to safety.

Meanwhile Ken had managed to reverse the boat off the rock on which it was stuck and had almost beached it nearby. The captain rallied his young naval trainees who completed the beaching task with a couple of lifeboats.

Next day, the Marguerite was repaired sufficiently by Des Donovan to be towed to his boat yard and eventually repaired both inside and out. The tide had gone through the hull overnight and a good deal of the interior had to be replaced.

Mercifully, the insurance company paid for the entire cost of the repairs.

The McLeod family subsequently had many wonderful holidays on the Marguerite not withstanding Rita’s low tolerance of rough seas!

Eventually after Ken retired he felt that he could no longer manage the boat safely on his own (the real Marguerite got terribly sea sick and did her best to be enthusiastic about boating) so it was sold to someone who assured Ken that he would take good care of it.

Within a year or so this owner had on sold it to another person, now unknown. Their motive for buying it is still a mystery but within a short time the Marguerite was reported sunk at the back of Rangitoto Island.

The insurance company “smelled a rat” and did a thorough investigation which revealed that the boat had been deliberately scuttled in order to claim the insurance. Anything of any value such as the compass and other nautical gear of any value was gone.

I do not know whether the hull was ever returned to Auckland but the whole dreadful history was heart breaking for Ken.”

14 -07-2020 Update from Christoph Hoessly
A cool section of photos below from Christoph, the grandson of then owner Ken McLeod – some featuring the builder of Marguerite – Des Donovan.

Des Townson – A Sailing Legacy
I’m a little excited today (it doesn’t take much – I’m a country boy at heart) because tonight is the launch of Brian Peet’s brilliant Des Townson book at the RNZYS. I was privileged to get a preview copy and have been devouring it for the last 3 weeks – its a monster, 343 pages and packed with insights, intel, line drawings and photos. Post the launch I will do a WW review on the book, but Woodys, save your pennies this is a must have.
And even better news for the those of Scottish descent – I will be giving a copy away on WW, but with the daily WW followers/readers being so big these days – best you buy a copy 🙂 More details tomorrow 😉 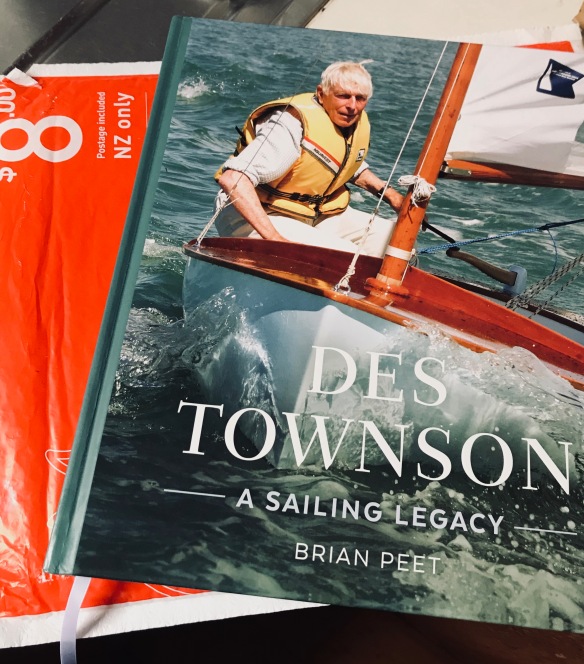 2 thoughts on “The Story of Marguerite”