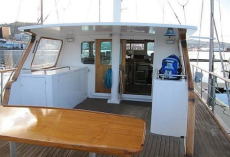 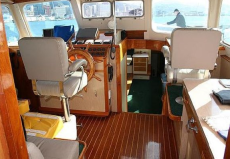 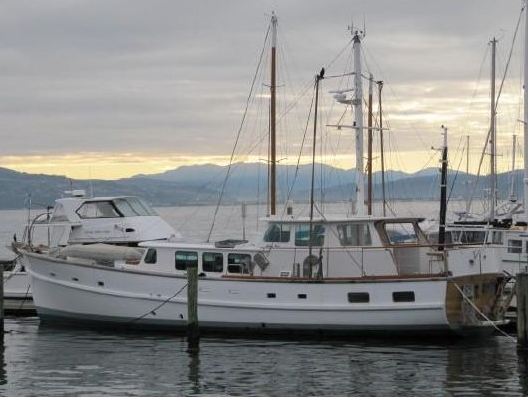 Lady Fair was designed by William Garden and built in America in 1960 using cedar. Originally a 67’ ketch, Ken Ricketts was told she was sailed to NZ approx. 7>8 years ago, under her original ketch rig by a previous owner. Then her rigging was removed & she was converted to a motor boat (by the present owner). Her coamings are original & she still has a substantial amount of lead ballast in the bilges.

Her power comes from a 170hp Caterpillar diesel that pushes her along at 7-9.5Kts.  Home has been the Viaduct Basin for much of her time in NZ, her owners live aboard permanently.

In a previous life she spent time in Turkey, c.2013 where she was for sale, it appears her name then was – Haz.

“Just to put the record straight. No criticism intended.
Lady Fair was designed by William Garden(hull #407), built by Fellowes and Stewart on Terminal Island in LA California and launched in 1960. She was built for Donald Douglas of the Douglas Corporation aircraft company.
She is constructed with bent oak frames and single planked with 2 ½” Douglas Fir. Transom is double planked Mahogany. Stem is Gum and the keel shoe is Ironwood. Designed as a motor-sailer with Ketch rig. Displacement 65 tons.
Engine is a single Caterpillar D342C of 220 max flywheel Horsepower @1300 rpm. In-line 6, displacement 20.4 litres. Weighing 3 tons with transmission. 10.5kts. @1,000rpm. Cruising at ~800rpm, 7.5kts. we burn ~20ltrs per hour Including 2 hrs generator use per day.
Fuel capacity = 12 tons in three tanks. F.W. capacity = 2.4 tons in two tanks. 1 ton holding tank.
A later owner sailed her to Wellington NZ. arriving in 1993. We bought her in 2012 and brought her up to Hobson West in the Viaduct where we remained until a year ago when we sadly had to vacate because – America’s Cup! We are now in Bayswater Marina. To my knowledge she has never been to Europe and has never had a name change. She has been to the pacific Islands a few times.
We hauled out at Gulf Harbour in March and some of the pictures are from that time. Below the waterline was scraped back to bare wood. Small area of worm in the keel and bottom of rudder. Had iron fastener problems so quite a lot of plank work, some rot in lower transom and a LOT of fasteners. The repairs were carried out by ‘Nautical Experience’ (Cory Rademaekers and team) and was to his usual absolutely first-class standard.
Kind regards, Dave and Mary Miller.”

Anyone Looking For A One Off Art Installation

The ‘boat’ below is on trademe – would look great at a pub, cafe or in a serious Woodys front paddock.
If the seller gets no interest, it will be cut up for firewood – its too cool for that 🙂
Wood appears to be oak, measures approx. 8mx3m. Currently located at Grahams Beach, Awhitu. Its very close to the road so moving her shouldn’t be a major.
Thanks to T Foh for the listing heads up.