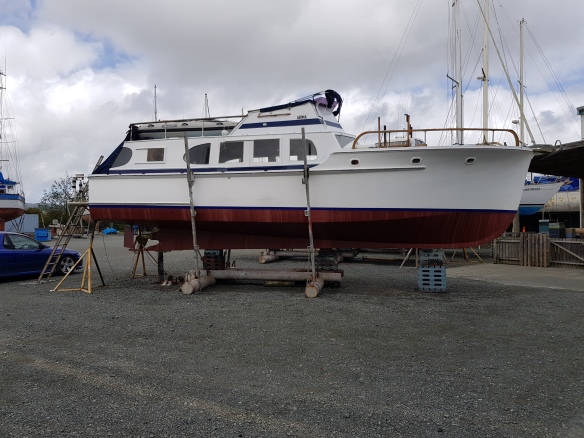 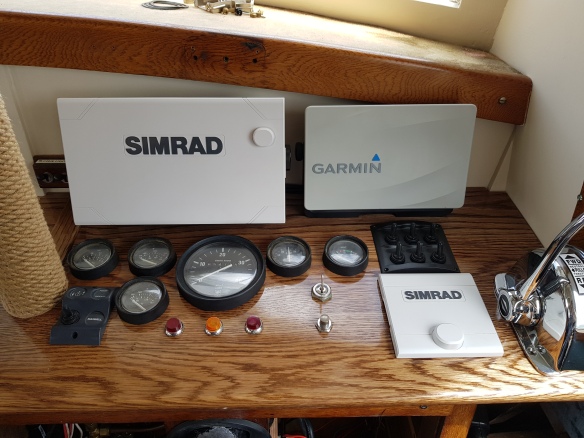 I was contacted by Kelly Ellis back in May 2018 – looking for some intel on her launch Arima. Kelly bought Arima in Oct 2017 and is aware that Arima had a remake around 1970 when a Ford D-series was installed along with a lot of brown Formica. When purchased both are showing their age. In Kelly’s words – the Ford was a filthy glutton and the downstairs helm station was virtually unchanged from 1970 and was a bit crowded.
Since taking over the custodianship Arima has had a new head, new electronics, new autopilot, been re-upholstered and had a back-to-bare bum job.
Kelly has also commissioned an internal revamp with the old Ford D series being replaced with a Cummins 6B. The plan is to relocate Arima from Whangarei to her new home in Havelock.
Kelly commented that Whangarei boat builder Jon Jones is responsible for the lovely work.
In a previous story on WW there has been some confusion as to when & who built her – 1953 or 1955 and possibly by Salthouse. As always I revert to Harold Kidd – HDK’s view is below:

“As I understand it, ARIMA was designed and built by Colin Wild in 1953, one of his last designs. Bob Salthouse was an apprentice at the time working on the boat. The first owner was Joe Dent and subsequent owners included Noel Kitchen, Ken Archer (1974 ish), T Whillans (1977) and David Campbell-Morrison (1989). Her original engine was a 4 cylinder Ford, replaced by a 6 cylinder Trader.
So her pedigree is superb.
John Salthouse built several near-clones of course.”

You can see photos for Arima here, before Kelly bought her
https://waitematawoodys.com/2017/07/06/arimu/