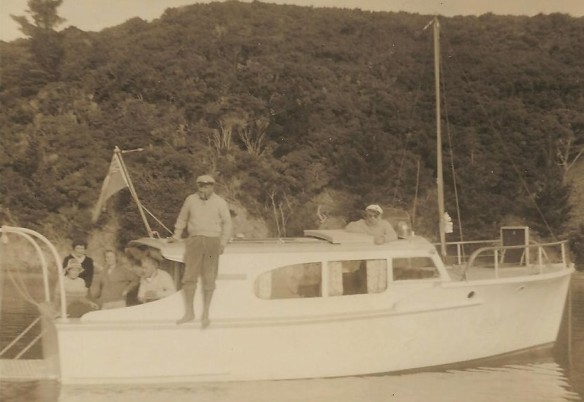 MAUREEN R  >> Moana Roa
I love stories like this, out of the blue my email inbox goes ping & I get sent the below – thats one of the cool things about WW, the huge group of followers who help me keep the site alive. And on that subject, don’t hold back sending in photos & intel on vessels – where I can I’ll use it. Sometimes it may not be enough to warrant a story, then out of the blue, someone else sends we stuff on the same boat & we have the makings of a WW story 🙂
Stuart Johnston sent me the above photos of the Owen Woolley built launch – Maureen R. As far as Stuart is aware it was one of Owen’s early builds in his Tamaki River shed.
Maureen R was built for Ross Reid of the earthmoving company of the same name and named after his wife. Stuart’s father purchased her in late 1962 from Ross who had a new Patiki built which Stuart recalls was named Maureen II.
In regards to her size, Stuart thinks she grew under his Dad’s tutelage but he recalls she was 28′ but maybe 30′ overall and was powered by a 40hp Parsons Pike which could be started by hand with a crank through the bulkhead if the batteries were low.
The family continued to keep her in the Tamaki opposite the yacht club but was also moored her at Stanmore Bay on Whangaparaoa for much of the time and they spent many hours in and around the Kawau area.
When purchased by the Johnston’s the coamings were all painted and one school holiday -Stuart, his brother and a mate spent hours sanding off the paint including red lead to wood and varnishing, the end result which is seen in the photos above, when she is moored at Stanmore Bay and also launching from the beach after another seasonal paint job. The side on shot at anchor with a number of people on board is in Bostaquet Bay probably the summer of 1962 or 1963. The coloured image taken at Orams around 2000.
The family sold her to a Mr Maltby who used her from Tindalls Bay for some years and its believed she later found her way to Samoa and word would have it that she was used for charter work.
A somewhat ugly aircon unit was fitted to her cabin top which Stuart spied at some point on her return, he was told that she had hit a reef whilst in Samoa and was returned to Auckland for repairs when salvaged.
Stuart commented that she was a very pretty little vessel but did not like a following or beam sea. The fiberglass dingy seen swinging off the davits in some photos is still owned by Stuart.
So woodys – the question/s of the day – where she is today? and can anyone correct Stuart’s memories and or fill in some gaps?
Input from Harold Kidd– APYMBA records of her start in 1957 when she was owned by R.C. Reid of 27 Tamaki Bay Drive, Pakuranga with dimensions of 29’x27’x9’x2’9″ and had a 40hp diesel. Later owner C. J. Johnstone. All of that squares with Stuart’s memories. I have nothing after Stuart’s father.
Photos below ex Paul Drake 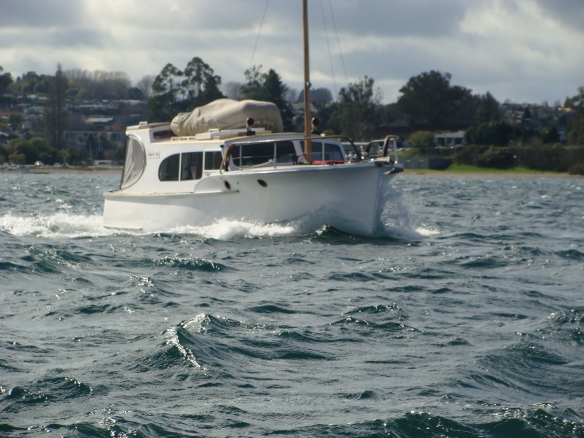 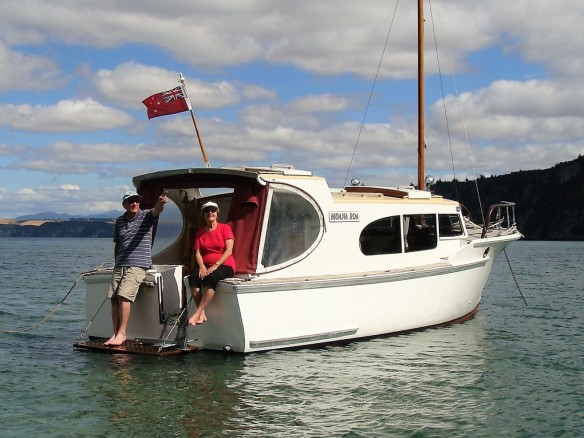 Input from owners – Norman & Jocelyn Pointonn –  Maureen R >> MoanaRoa is berthed at Lake Taupo. We purchased her from the Fransham family in 1999 and had Bernie Dale renew the teak decks plus raise the dodger for sun protection and headroom in the cockpit. The builders plate states that she was built by Owen Woolley at Panmure in 1957
We have found her to be a good boat on the Lake, she does not like a beam following sea very much but apart from that a very comfortable and safe boat. We have continued to maintain her, new teak and holly floors, squabs, toilet, holding tank, stove, GPS and servicing of the Ford four cylinder engine and Paragon gearbox.
The best useage that we have had is 40 trips in a year, so she is  well used and loved.
The story about her going to the islands was told to me by the previous owners plus the grounding a  coral reef. It was suggested that she made her way to the islands under her own power but that seems unlikely considering the amount of fuel required for the trip
The photo below shows the addition of the dodger, moored in Mine Bay where she spends a lot of time. 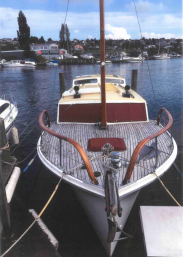