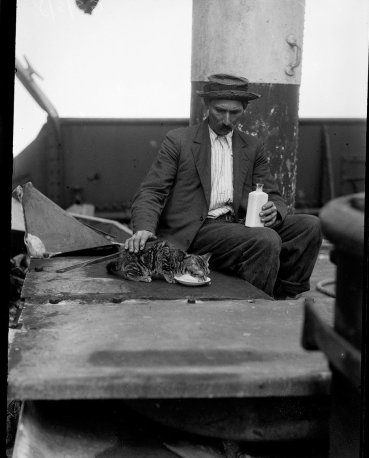 Wiltshire Wreck
The above photos ex the NZ Herald heritage images files via Lew Redwood fb show the 1912 steamship, Wiltshire wrecked at Rosalie Bay Great Barrier Island in June 1922. You can read more about the wreck at the link below.
(The ships cat pictured survived)
https://sites.google.com/a/aotea.org/don-armitage/Home/great-barrier-island-history/shipwrecks–scuttlings/shipwrecks-around-the-coast-of-great-barrier-island/wreck-of-ss-wiltshire-1923
Today Im keen to ID the small launch alongside the wreck in the first photo above.  Can anyone help? Its a tall ask, a lot very similar small launches were around back then, they were the equivalent of todays Toyota ute 🙂
Harold Kidd Input – My opinion is that she’s YORK built by Bailey & Lowe in 1913 for C R Pease with a 10hp Sterling Kid. She looks very like Capt. H D Heather’s 1914 ROTHESAY built by Bailey & Lowe with the same engine. Capt Tom Ryan bought her in 1921 when he was living on the Barrier so the timing is right.