Anyone looking for a bargain classic woody? Kingfish is listed on trademe (thanks Ian McDonald) with a $1 reserve & an oh to familiar tale “its leaking and sinking and due to a marriage breakup its not getting the love it needs”

The owner is after a quick sale as the bilge pumps are shot. Listing details here https://touch.trademe.co.nz/motors/listing/view/1639329557

Sorry about the quality of the interior photos – but thats all that was available.

Interested to learn more about Kingfish – anyone able to help?

Input from Harold Kidd & photos below from Cameron Pollard

I’m certain KINGFISH has been on here before. She was built by H.N. Burgess at Judges Bay in 1914 as a hybrid yacht/launch, expressly for game fishing and spent her early life based in Gisborne and Tauranga. Unrecognizable from her original configuration with quite a big rig. 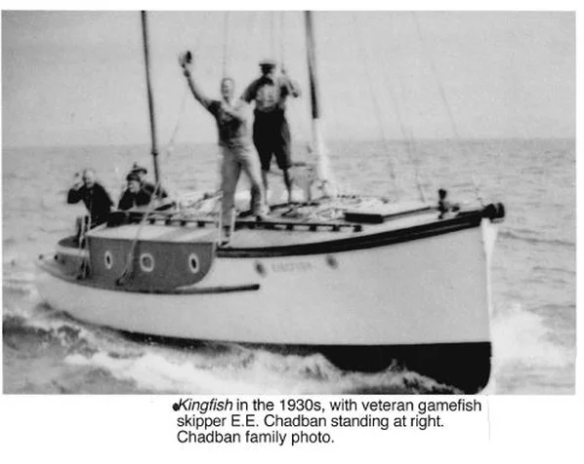 27-05-2018 Input from Dave Butler – Kingfish was owned by Jack Peat from Te Puna who had it moored in Tauranga harbour in the 60’s. He was a member of the Tauranga game fishing club and I have numerous photos of him and crew with marlin, makos, and threshers caught near mayor island. Kingfish was powered by a Gadyver engine? which Jack replaced. He gave me the old prop because the new engine revolved the drive shaft in the opposite direction. Jack sold her in 1972 and she was moored at the new marina in Tauranga harbour for several years after that.

11-06-2018 – Update. I can report that Kingfish has joined the Pollard fleet & has already been given some TLC , refer photos below hauled out + photos of her being retrieved for the trip ‘home’.