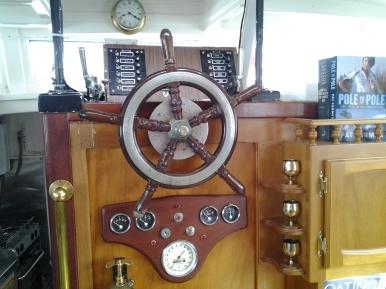 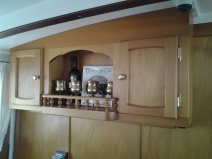 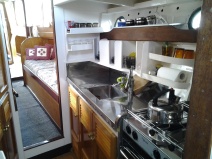 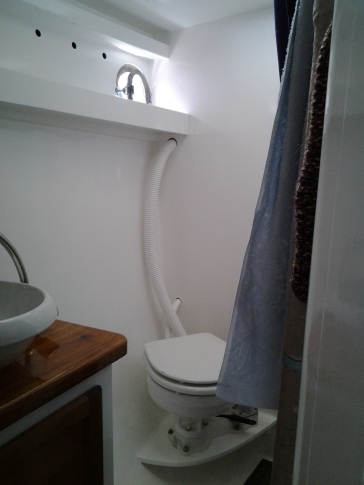 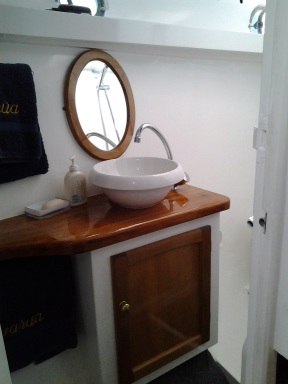 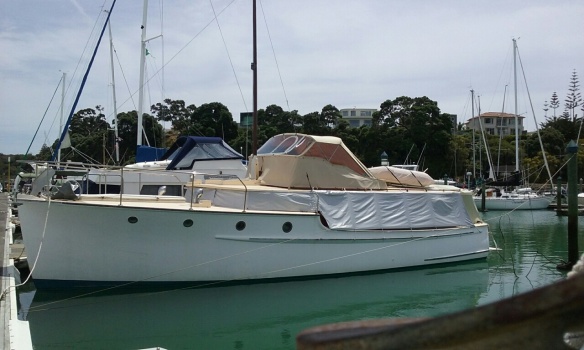 Awarua the 1947, Roy Lidgard built, 37′ launch, has appeared on ww before (link below) but now as a result of Ken Ricketts recent visit to Pine Harbour Marina & catching up with Awarua’s owner – Ross Mason, we now get to see below decks.

When Ross bought her 20 years ago from a live aboard owner in Picton & had her trucked to Auckland from Mana in Wellington, she was in a very run down state inside. Ross has over the years done a rolling refit, with the removal of old paint, which was hugely a labour intensive job, & fitted new squabs (made by himself) + made & fitted the wall cabinets. Fitted the flying bridge, lined the inner sides of the hull with varnished kauri battens, again all his own handy work.
Her present engine is as purchased & is an early series NZ marinised 6 cyl. Ford diesel, which Ross thinks may have been marinised by Chatfield Engineering in the South Island. Ken thinks it is probably the engine which replaced the Waukesha Hesselman diesel (second engine she had in her early life) as it is such an old version of the Ford engine.
Also include below is an inspection report done on her, in December 1972 by previous owner Ted Cooper, eldest son, the late John Cooper, who became a master boat builder & surveyor, & like his father before him, was a perfectionist in all he did. He owned the Lady Crossley in his later years, before he sadly passed away, at a much too young an age. He was the ultimate person to do this survey, as he had helped his dad significantly for his age, in her construction, & knew every part of her so well, as one can see in the report. As a result of this report, we know she belonged to a Mr. R Lilburne of 100 North St Morrinsville from Dec. 1972, for a period & she was moored at Bayswater when he bought her.