She was originally powered by a 3 hp 1 cyl., Yanmar diesel & the Brown’s built her almost entirely in the traditional single skin, ribbed copper nailed, red lead concept, with only the smallest bit  of glued work in her.The brothers started her when they were 15 years old in 1965, when Colin was a new apprentice boatbuilder & launched her when they were 17. They kept her for 15 years.

The Brown’s don’t recall who she was sold to, but she disappeared until she popped up at Pine Harbour, where Colin Brown saw her one day in 2000. She then disappeared again until 2009, when Colin had a call from the person Colin believed is probably still the present owner, an American, living in the Bay of Islands.
Colin is in fact correct – the American being Bill Sellers  who’s lived in NZ for many years & is  presently living aboard at Orongo Bay BO.I. Ostkust has had a name change to Ludique & been lengthened her to 28′. Photos & details ex Colin Brown, emailed to me by Ken Ricketts.

12-09-2016 photos below of the vessel currently moored in the Bay of Islands. Taken by John Grant, emailed in by Ken Ricketts 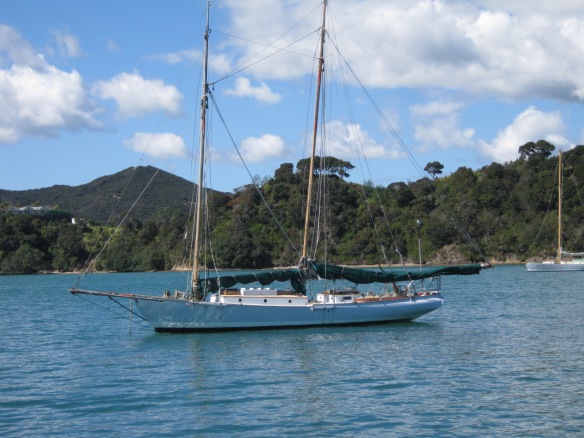