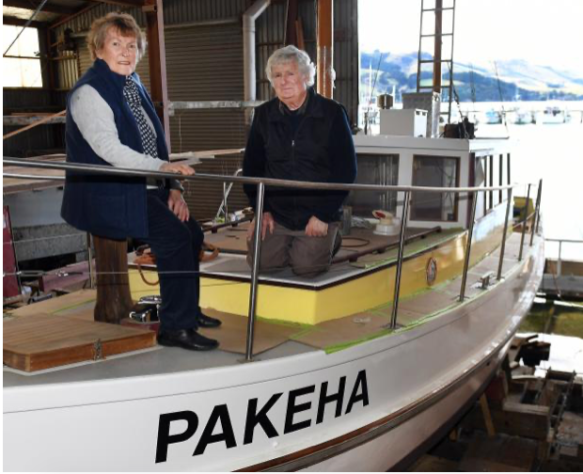 RESTORATION OF PAKEHA
One of the great things about provincial New Zealand is that cool human interest stories still make the front page of the newspaper. On Friday (24th July) Jacob McSweeny ran a story in the Otago Daily Times on the ex workboat – Pakeha.
Built in 1925, Pakeha is the pride and joy of Beaven Burrows, whose connection to the boat goes back to his youth when he used to get rides on Pakeha off the coast of Kaikoura, where his family resided at the time.
I’ll let Jacob tell the story – At 16 Beaven was intent on becoming a commercial fisherman like his father, but that was not to be.’No, I want you to stay and work on the farm. It’s my wish’, his dad said to him. Beaven has been a dairy farmer ever since but his love of boats and the sea has never ceased.

Then four years ago, a friend pointed out Pakeha was for sale. ‘I’d always loved that boat . . .so I decided to buy it.’

The old fishing boat is a true survivor. Beaven believes it may the only one from Kaikoura at that time still around. ‘It’s been washed up on the beach . . .five, six times in its life and survived.’

There was quite a bit of rot in it and so when it was brought to Careys Bay Marine Services in October 2018 it had to be stripped down and rebuilt.

The boat builders were able to rebuild Pakeha referencing old photos and Beavans’ memory of how it was. ‘It’s always been one of the nicest, tidiest boats as a fishing boat,’ Beaven said. The boat is about a week away from completion, with just electric work to be done.

Beaven and wife Nancy are planning a big trip to the top of the South Island this summer, including a visit to the daughter of the first owner of Pakeha, who lives in Waimate, and to the boat’s old home of Kaikoura.

Video link below ex the Otago Daily Times digital edition
Would be nice if we can add to this story with some details on the builder and what see got up to over the years?
https://players.brightcove.net/4915776650001/rJepAGlOg_default/index.html?videoId=6174237993001
Photos below ex Careys Bay Marine Services fb page. Thanks Lindsay Grenfell for the heads up 🙂 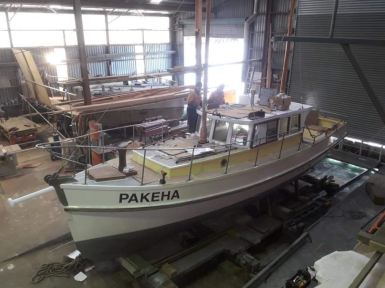 2 thoughts on “Restoration of Pakeha”