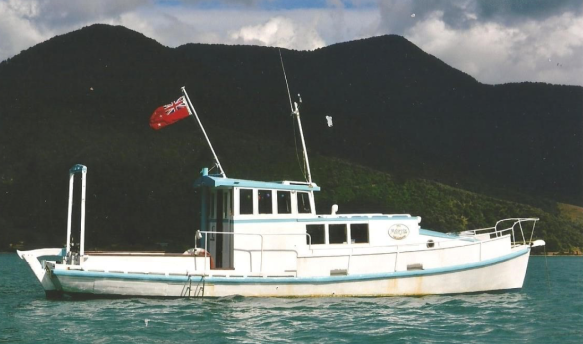 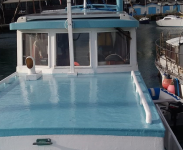 MYRTLE
Myrtle (White Heather) was launched in 1914 as a fishing trawler. Her original engine was a 10hp ‘Oil Motor’ so her main power was via a ketch rig.
In the late 1960’s she was re-powered with a freshwater cooled Fordson D92 , her ketch rig was discarded at this time.
Her trademe listing (thanks Ian McDonald) states she is approx. 46’ in length & designed/built? by Miller. Over the years a larger wheelhouse & saloon have been added.
Myrtle’s 65hp engine sees her cruising at 5.8knots.
Given her age, there must a lot of history around Myrtle – can anyone enlighten us more on her past?
Harold Kidd Input – MYRTLE appears to have been built as WHITE HEATHER in October/November 1913. She was 39ft loa, 9ft beam, 10hp engine. That’s 10 rated hp not 10 bhp so it was her main propulsion.She was for sale in Port Chalmers in April 1914. As for builder, the choice is between Knewstubb Bros, William MacDougall, Miller &amp; Tunnage or Miller Bros. From then on there are so many MYRTLES and WHITE HEATHERS that it’s hard to pick her out.