In the photo above we see the NZS Co. ship Kaipara, built in 1903 – aground in the Rangitoto Channel on 14 June 1910. She was on a voyage from Auckland to London & hit uncharted rocks,she was refloated on 20th jan & repaired. The captain was exonerated from all blame.

The question of the day is – who can ID the launch alongside the sailing ship?

OLD SEASPRAY MAGAZINES – I have been contacted by someone clearing out their fathers ‘stuff’ & amongst it is 4 cartons of old Seaspray magazines – anyone want them? 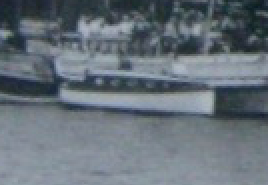