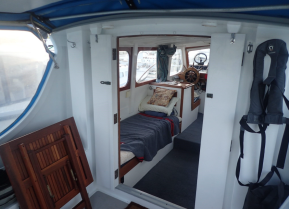 A Spirit of Tradition Woody

Hull construction is 1 3/8” kauri plank and the zoom zoom comes from a 100hp GM Detroit diesel.

Home port is Nelson so she comes with all the fruit, including the mandatory diesel heater 😉 Anyone able to put a name to the launch?

Input from John Wicks – Cna’t for the life of me remember her name, but Jorgensens built her for one Cdr. “Sankey” Critchley who lived just outside Blenheim and had a bach at a bay known as Longbeach in the Grove Arm of Queen Charlotte Sound.
Cdr Critchley had previously owned the Albert Strange yawl “Sheila II” which he bought from Adrian Hayter after the latter had sailed her out from the UK.

Anyone Looking For A  Winter Project?

I have been contacted by Mike Renner who inherited a pond yacht (photos below) from his father, who died over 50 years ago.  It’s 1.2 metres long & Mike suspect it belonged to his grandfather.  It’s been hanging in the garage for years and it needs a new home.

Mike’s grandfather and father were very keen boaties.  His grandfather owned several yachts, including ‘Rogue’, and at one stage owned 32 parts in ‘Waitangi’.  He migrated to launches in later years, including Zane Grey’s ‘Otehei’.
Mike commented that the hull looks is good order & there is a mast included.
So Woodys – it would be a shame for it not to have another life somewhere? Mike can be contacted at  mike@merel.co.nz
Ps – looking at the photos I was relieved to see a good stack of firewood in the background 😉 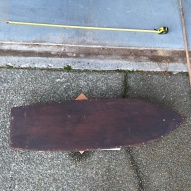 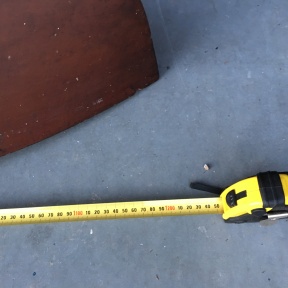 3 thoughts on “A Spirit of Tradition Woody”