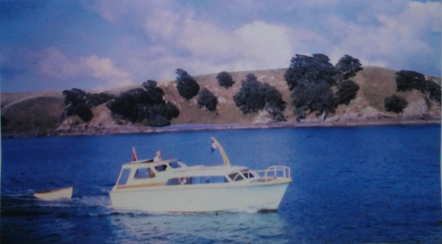 I have had the above photos that are both taggged ‘Hirere’ in my ‘upcoming ww stories’ file for a long time, hoping that at some stage I would uncover more (some) details on the name & determine if they are the same launch & if not which one is Hirere. To date nothing – so I put her out there today to she if we can answer my mystery.

“The photos today came to you from a group I sent to Harold Kidd a couple of years back. The top photo is Poaka which was built about 1959 for my father Stan Blundell by Snow Waters. She was featured by Sea Spray magazine not long after as a”quart in a pint pot”.He sold her to Athol Mellars a couple of years later and his son John later took her to Gt Barrier where he lives.
The other photo is the 29foot Vindex built also for my father about 1963 by Jim Young in his shed at Birkenhead wharf.Dad wanted to keep the engine out of the main cabin so it was installed further aft and fitted with a vee drive.
Re the dinghy it was one of Phil Bartons 8footers and was the best of the bunch that were around at that time. The wooden one in the photo was used as a mould to produce fibreglass versions not long after.That is another story.”