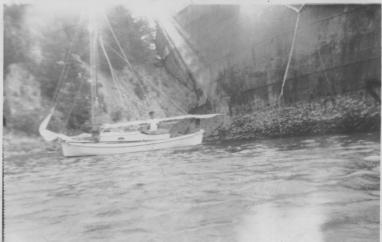 Wreck of Rewa, Moturekareka Is.

On beach at Okahu Bay

Diving for bottles off Kohimarama

VENTURE – Sailing Sunday photos & detail ex Don Ross ex Merv Stockley. With lots of input from Harold Kidd The history of Venture (E38) goes something like this – she started life as a carvel lifeboat built on the Northern Wairoa by Barbour then was converted to a keel yacht by Bob Shakespear. Alan Coates (later a Magistrate) owned her about 1931 and sold her to Dick Bakewell in 1936. Harold imagines Dick sold her on when he bought JEANETTE from Ted Le Huquet in 1948. Don Ross purchased her from Dick Bakewell about 1939-40 (dates a bit out, but you get that), Don thinks she was built of island kauri and thought she had been built in the islands and sailed to NZ, this contradicts Harold’s records but Don’s version is only ‘dock chat’. She was only 18ft and a carvel double-ender. Don later swapped Venture’ for the launch Ngaroma from Snow Harris who Don believes was a well known yachtie in Mullety circles from Auckland. At the time Snow lived at Hansen’s Island (after Charlie Hansen had passed on) and wanted a yacht instead of a launch. Don lived for most of his younger years in Auckland and sailed all round the Gulf. One of his favourite trips was to sail up to Hansen’s Island for the weekend. He has a number of letters from Charlie Hansen. In 1949 Don,his wife and daughter Lyn headed off to Whitianga in Ngaroma where he used her for game fishing until 1962. Merv Stockley believes they saw Venture up on Bucklands Beach in Auckland around 1968 and took the above photos. Some of her original keel had been removed then. Merv has commented that of all Don’s boats Venture was closest to his heart as he & his late wife, Joan,  did a lot of sailing in Venture & he would love to know if she is still around. Harold Kidd Input Merv is undoubtedly right that Don bought her from Dick Bakewell c1939. My date of 1948 was the most recent limit date, logically. The first mention of her I can find (amongst a scrum of other VENTUREs) is in 1933 when she took part in an Otahuhu Sailing Club race to Bucklands Beach, so she was obviously up the Tamaki at that time. Dick Bakewell told me she was built by Barbour as a lifeboat for ARATAPU which he built in 1878, a sister-ship to HUIA. ARATAPU was sold overseas in 1932, so that kind of works. Did I say Alan Coates owned her in 1931? All I know about his ownership is that he sold her to Dick Bakewell in 1936. Alan was a keen yachtsman in his earlier days and was associated with the Richmond, Otahuhu and Manukau clubs.Lovely bloke. It’s possible that he bought her when ARATAPU was sold, and had Bob Shakespear convert her to a deadwood keeler, but that’s conjecture. She was registered as E38 when it became necessary to wear sail numbers during WW2. Update from Russell Ward – 12-05-2015 1987 photo below of Venture moored at Okahu Bay, off the slipway over towards Pooh Pt. Russell had just launched SL Gypsy and admired Venture’s style. In typical Mr Ward style he warns us to not get sidetracked by the elegant steamer centre frame 🙂 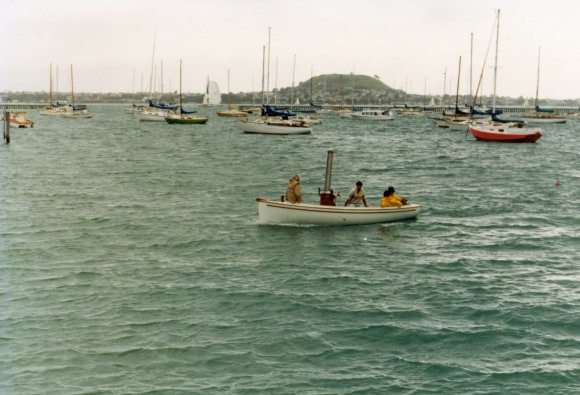