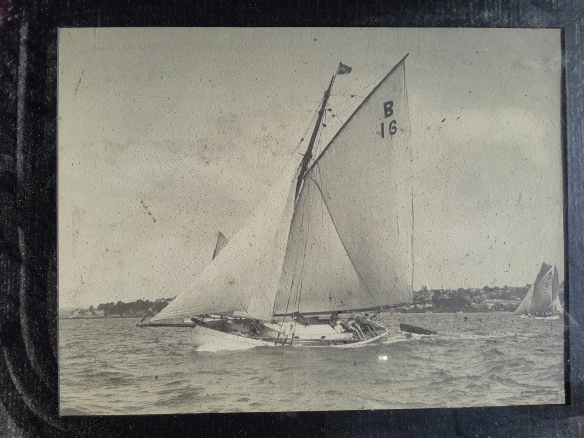 I have recently been contacted by Andrew Mason who while going thru a collection of old photos, came across the one above by H Winkelmann, sporting the sail number B16. Andrew was asking if anyone knew if she was still around and if so, what became of her.

I was able to point Andrew in the direction of a comment by Harold Kidd from back in April 2015 where HDK commented on a story / photo ex Chris McMullen on a mystery ship (yacht) wreck.
HDK advised that B16 was the Bailey & Lowe keel yacht Rangi, which had broken up when she came ashore at Norfolk Island in 1951.
Anyone able to tell us more about Rangi prior to 1951?
Harold Kidd Input – She was built as the fishing boat or “schnapper boat” for line fishing by Bailey &amp; Lowe in 1903 as SCHOPOLO for a Greek fisherman called Nicholas. She was very like if not a twin to the Bailey &amp; Lowe fishing boat WHITE HEATHER built for J. Wheeler. Logan Bros’ VICTORY and FRANCES were the same sort of boats. Motor fishing launches made them uneconomical very shortly after and they were converted to most satisfactory yachts because of their extra beam.
SCHOPOLO was sold out of the fishing industry and became LORELEI in 1919, changed hands and was renamed RANGI around 1923.
She took part in the 1931, 1948 and 1951 TransTasman races but was lost at Norfolk Is on her return in 1951.
Input from Jim Lott – Rangi was owned for a number of years by Con Thode’s father. Con learned his early sailing on board and spoke often of his time on board, and his sadness when she was wrecked after his father sold her.
I have been away overseas on “Victoria” (another Auckland ‘woody’, since 2011 and am now back living in NZ.
Currently we won the Camelot “Mokoia” (Stewart) and also owned “Vectis” (Woolacott) in the 1970’s.