The above motor-sailer, Athena, was spotted by John Wicks at Te Kouma Village, Coromandel.
John commented that she was a sturdy looking old girl and wondered if the woodys could shed some light on per background?
Input from Cameron Pollard – ATHENA was built by Des Donovan (Andy’s brother).
Des bulit her at his devonport property and had her craned into the tide off devonport wharf.
Originally had an AEC but that was replaced by her next owners the Johnson family.
They fitted a new 6lx gardner which is still in her.
She is currently hauled out at kopu for a paint.
Her present new owners completed a 9 year rebuld/ transformation on her and is a absolute credit to them.
The stories on Athena over the years have more up and downs than a busy hotel elevator some good and others not.
It’s very good to know she finally made it back to the water.

She ran over a bit of nz. ( like many still do). There was a photo album on board with pictures of her on the rock that Des took while sitting in the dinghy.

Sadly when the tide dropped so did Athena.
She filled up and skidded off the rock.
Story has it she was lost for quite a few days as the tide took her for a underwater voyage.
When she was later found and salvaged the mud and foul inside her was quite unreal.
Des,s photos showed her tied alongside the harbourboard slipway getting repaired.
I think the Johnsons purchased her not long after.
A. Johnson snr owned Lady Margaret (col wild one) before Athena.
Photo below ex Cameron of her at Kopu, looking vert smart

The 2nd and 3rd photos are dated 12 March 1967 and Athena is ‘wrecked’ north of Elephant Cove. 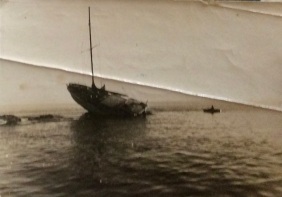 Ken Ricketts Input – ATHENA replaced the 32 foot ADARA Des D had built himself c1948/50 which was an identical sister ship to building contractor Fred Steele’s FAYE, & they both built those 2 boats together, at the same time, alongside each other, on the North Shore.
Big story tomorrow – Achilles re-launched + the end of a era – boatyard closes + 90th birthday party – 60+ photos