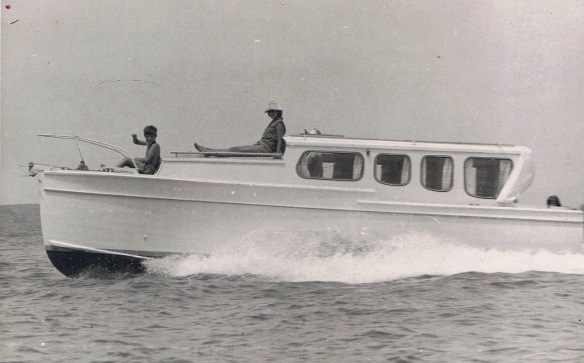 ESTEVAN
The above photo of Estevan was sent in by Juliana Cooke, Estevan was her families launch in very late 1969 > early 1970. Juliana was very young back then but she recalls it was hand (home) built either by or for a doctor, probably in 1969. Juliana’s family acquired her in late 1969 & had their first trip away starting on Friday 26th December to Motuihe > Waiheke > Ponui, this cruise went into Jan 1970. Juliana recalls her brothers sailed a Flying Fifteen to Ponui Island and slept there in a tent because Estevan was too small, or thats what they claimed 😉
While the family altered the layout from the original design, it soon became apparent that Estevan was too small for the family, so they bought the launch Robyn Gae, which they owned until very recently.
So woodys does anyone know what happened to Estevan?
(As a side issue, I understand that Robyn Gae, that was being sold by Tom Nesbitt, has been sold. Will be interesting to to find out what the buyer paid, relative to the buy price……. I’m not against a fair profit but there is fair & fair 😉
Harold Kidd Input – All I have is that ESTEVAN was owned by Dr J.E.R Edgar of Orakei Road in 1966 and by R.G. Shaw of Dominion Road in 1973. The Turnwalds owned her in between those two.