Doing a shout out today to all Classic Yacht Association launch owners to remind you that next weekend (Dec 3>4) is the annual CYA Patio Bay weekend. The highlight of which being the byo BBQ (bbq’s provided for cooking) ashore at Woolicott’s bach. Most of us rate it as the #1 social event of the year in terms of mix & mingling. Check out the photos from last year here https://waitematawoodys.com/2015/12/07/cya-patio-bay-bbq-xmas-race-weekend-2015/
The weekend sees over 50 classic launch & yachts come together for a weekend of fun, friendship & fraternity.

Mataroa Update
Not wanting to short change you today in terms of your classic woody ‘fix’ – below a few spy photos taken by Max Uivel of the progress being made on the 1928 Joe Slattery launch, Mataroa in the Evans Bay slip yard.
Rob Uivel can be seen hard at work. Max commented that there is still a way to go but progress has been good considering the meteorological and seismic conditions in Wellington.
I have to say she is a very pretty classic & looks to be getting a very sympathetic make-over – we like that 🙂 More details on her past here. https://waitematawoodys.com/2016/10/31/mataroa-kenya-2/ 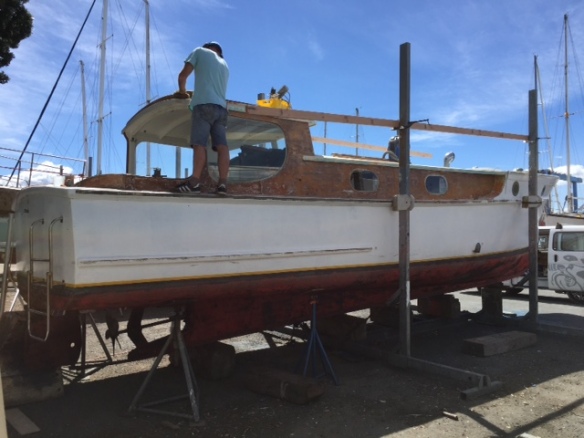 A Message From Manu PB

Hi Alan,
My name’s Manu, i’m in wellington. was looking for photos on the net of a nice kauri launch out of interest, as i used to own and live in one.
What do you know, Mataroa comes up!
My father Simon Blakiston bought her from Kevin, end of 1999 (?) and had her brought down to Chaffers marina straight away. We enjoyed trips to the sounds, havelock, and around the harbour (some of the photos posted are ours) for a few years, and he and I ended up living onboard for a couple years, all the while he worked as an architect there!  the rearmost port side berth in the main cabin may still have a fold-out drawing table under it. I lived there with my partner later on also. in 2007 Dad was taken by cancer and I inherited the boat. Sadly I’m not a particularly nautical person, and it became apparent that i was doing her no favours by putting off some much needed restoration work. I sold her to a young couple who lived onboard at chaffers for a while.
It’s great to see the photos up on display! really brings back some memories of quite an important little bit of my life!
One of the better stories from my time with Mataroa was being in my last year of school, and a friend saying his father and grandfather were wandering at the marina and had found a boat the grandfather had driven during the war. it took only a small amount of figuring to realise he was talking about Mataroa. Granddad was Bluey Barnes (forgotten his actual first name sorry! this can all be revised), the 18 yearold mentioned on your site by Kevin. Dad met with Bluey and took him out for a spin, apparently his stomach wasn’t what it used to be by this point. Somewhere i have a couple of copies of photos from Bluey, one of his boat boy topside, and another of her absolutely loaded with troops. I hope copies of these photos made it into the boat’s files, otherwise i can try and dig them out. Kevin also mentions a tape recording of Bluey’s exploits which i have too, but havent played since dad recorded it.
There are a couple more stories floating around i think, let me know if you want me to dig up any of them, or the photos and tape. I can also find a little more out about Bluey, sadly he passed away a year or two ago, but i still see his grandson regularly.

Cheers and thanks for getting Mataroa up on the net for all to see, she’s missed out on a lot of due credit over the last few years. great to see some photos i haven’t before.
thanks,
Manu PB