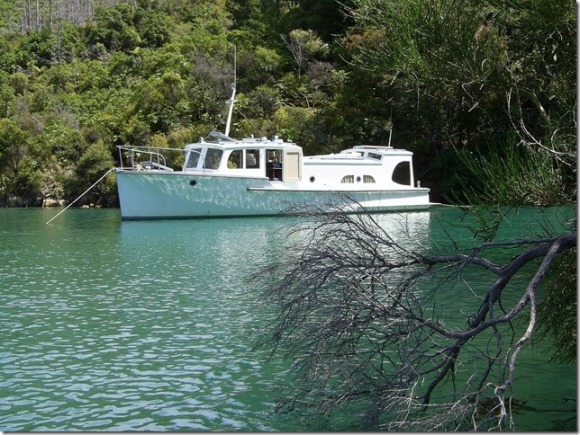 Her present owner Steve Simms of Motueka lives aboard & has had her for 8 years. Steve sails her regularly in the Abel Tasman Park & across to the Marlborough Sounds. He believes she has always been called Lady Ellison.
Previous owners were Bruce & Betty McNab & they owned for 37 years & kept her in Havelock. They replaced the BMC commodore for the current Ford 120hp.

It is believed that she went to Paremata after leaving Auckland but no dates. As a kid in the 1950’s Mark Jarvis lived in Paremata & remembers a similar looking Sam Ford moored in Browns Bay, Paremata with a yellow painted cabin, he suspects it was this boat. Adding to this is when Steve purchased her she was yellow and green (see photos below) & Steve then raised the centre cabin by 9″ & gave the windscreen a visor & added side moldings to the cabin edges.

Anyone able to confirm the Sam Ford link & supply more info on her ?

Photos Below As Purchased 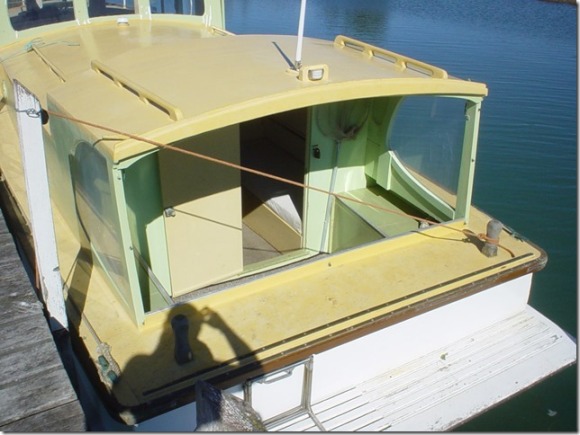 Harold Kidd Update (edited by AH)
The hull was built by Sam Ford c1952-3 for Albert Ritchie Hammer of 22 Dommett Ave Epsom. Hammer worked on her for 6 months at Sam’s yard and she was launched at Okahu Bay. Somewhere I have a pic of her on her way to be launched. The treatment of the coamings and Ford trademark windows is a bit clumsy compared with Sam’s usual treatment of them, but probably a combination of the current owner raising the center cabin by 9″ & Hammer’s handy work rather than Sam. She was first registered with APYMBA in 1953 with the call-sign ZMZL and was still in Auckland in 1957.

PS Hammer died in 2001 aged 84 but his descendants may be able to fill in LADY ELLISON’s early history.

John Blundell has emailed me to say that he knew Bert Hammer well. He ran a second hand furniture shop (and was an auctioneer) on Broadway Newmarket. John got to know him when he started work at the family firm, Fisher &amp; Blundell around 1953-4 and sailed with him on Hammer’s keeler VECTIS (Bert Woollacott, 1929, originally B15, then C15, then F15). They broke the mast on one night race to Kawau.
John’s later memories of Hammer were when he owned BOUNTY which was famous for its escapades in the South Pacific when owned by Errol Flynn (?)…..any comments on BOUNTY.?She’s outside my timescale. She was part of the fleet that went to Mururoa to protest against the French nuclear tests. She was about 40ft oa and a heavy double-ended ketch.
Finally John makes the point that Bert Hammer never married so he doubts if we will hear from any descendants!