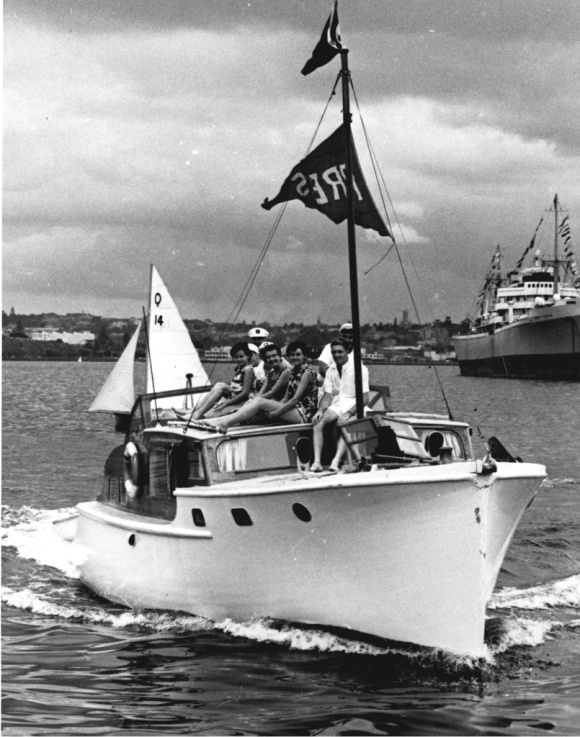 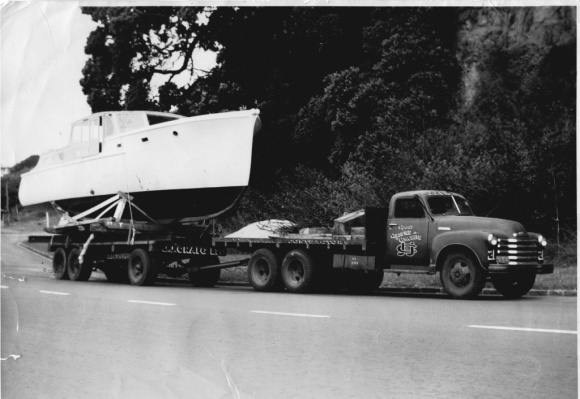 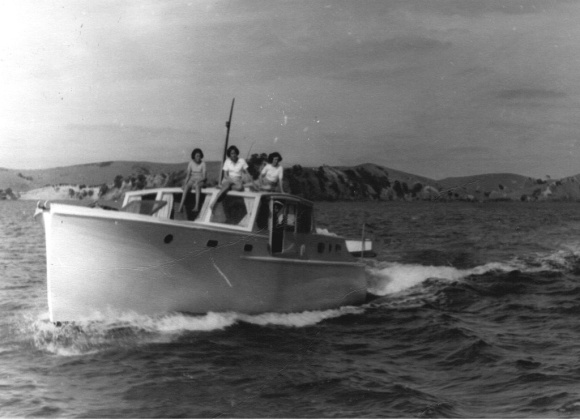 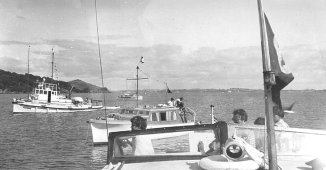 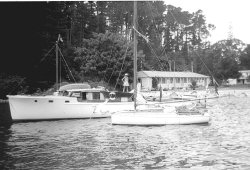 HUKARERE
Story compiled by Alan Houghton from info ex Diane Hopson (daughter of original owner Les Ravenhall), photos ex Diane & Ken Ricketts
The building of Hukarere, which means ‘foam driven by sea’, involved two key people; Mac McGeady who built the hull & her owner Les Ravenhall, a builder who spent his summer holidays outfitting her. Ravenhall was assisted by his two brothers Ron & Wilf. His three daughters – Diane Hopson aged 11 at the time & her elder sister aged 13 & the ‘baby’ aged 3 were all involved as well. In the summer of 1948 New Zealand was in the middle of a Polio epidemic, so school was out for an extended period, giving the daughters a lot of free time to help out.
It’s said that McGeady based the hull on a Chris Craft design that Ravenhall saw in an American magazine in 1948 (refer clippings below).
Diane recalls the hull arriving & being placed on the front lawn, neighbors in those days must have been a lot more accommodating than they are today as Ravenhall worked night & day outfitting her. Diane recalls that the engine was already installed when the hull arrived. The work must have been undertaken at a cracking pace as the hull arrived in early December 1948 & she was launched at Okahu Bay on Anniversary weekend 1949. Diane says she leaked like a sieve & they had to work the bilge pump the whole way to Islington Bay on the maiden voyage. The building process & this first trip set the scene for a lifetime love of the sea & the boat for the entire family.
A few years after launching (c.1954/55) Ravenhall decided to rebuild the deck house & add a flying bridge. This gave Ravenhall direct door access to the engine room under the flying bridge rather than having to pull up the floorboards of the main cabin. At this time he replaced the original Lees Marine petrol engine with a Perkins diesel.
The Ravenhall family used to spend every weekend aboard, from Labour Weekend to Easter, and all summer holidays.  In the winter she was hauled up into the family boat shed in Ngapipi road  for maintenance. The boat shed had been in the Ravenhall family for years – originally owned by Diane’s grandfather – Chas W Ravenhall who owned the launches Silver Spray and Ismay.

Hukarere was invited to take part as a patrol boat, when the Gothic came into Auckland Harbour, for the Royal visit.  Diane recalls being anchored out in the Rangitoto Channel for about 8 hours in a rough sea, a day she & the family did not forget.  For many years Hukarere was designated the NZ Herald press boat for the Auckland Regatta (refer photos with ‘Press’ burgee flying).  In this role she was often involved in rescuing the little racing yachts when the wind was just too much for them.

As a result of changing family circumstances the descision was made to sell the boat in 1960 & buy a beach house. Hukarere had a new owner at Waiheke Island where she was moored for a number of years. 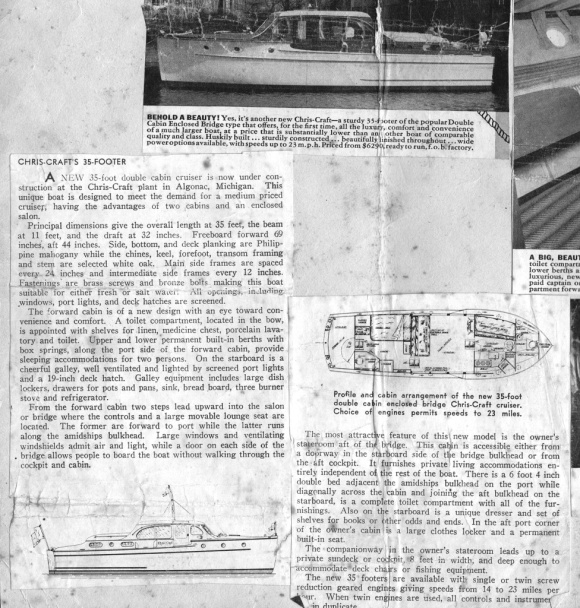 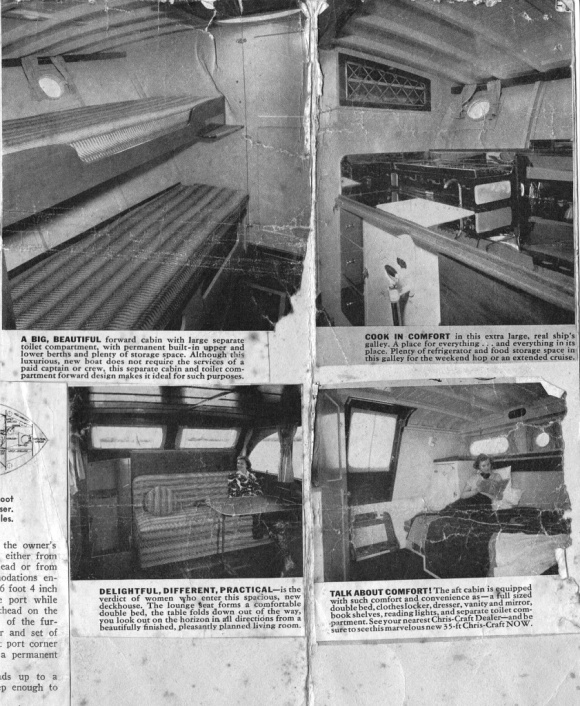 Last week, my wife (youngest daughter of Les Ravenhall) and I went down to the boat sheds on Ngapipi Road to check which shed used to house Hukarere and, thanks to Glenn Burnnand, we were able to establish, as believed, that it was shed 15.

The last time that we saw Hukarere was in March 2000 when, by sheer chance, on a visit to Waiheke Island, we saw her in Matiatia Bay and was owned by a bus driver.
I understand that it has been sold several times since then. 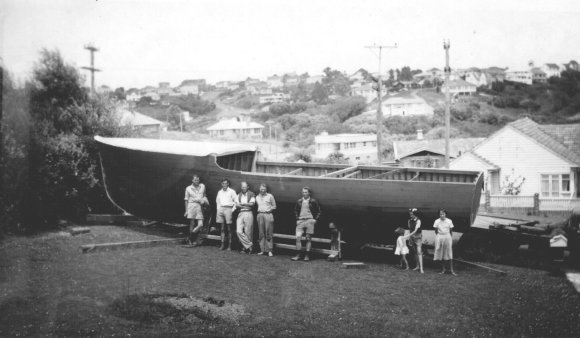 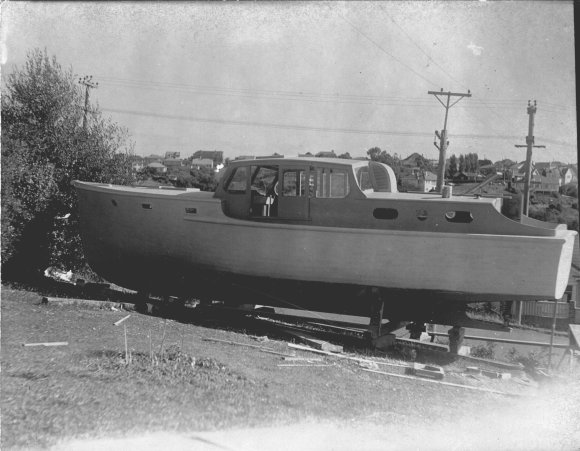 The photos above show the arrival of Hukarere at the Ravenhall family home in Mission Bay. Seen are the 3 Ravenhall sisters (Diane, Barbara & Briar) & a mix of uncles and neighbours on hand to supervise & admire. Photos ex Ravenhall family via Ken Ricketts.