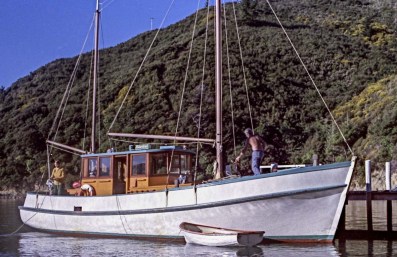 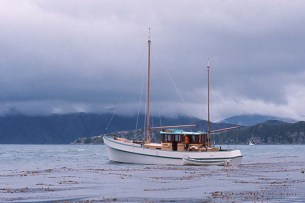 Hinewai a 40′ motorsailer was designed by Roger Carey (taken off Carey’s Taonui, a 1950s design) & built by John and Bev Gander in 1968. 39′ LOA, 11′ Beam, 4′ 6″ Draft. 17 tonne displacement.
Built with miro planking, tallowwood keel and stem & red birch frames. Sporting an oregan mast.
Powered by a 3 cylinder  371 Series GM, she has been re-powered with a John Deere.
Her teak decks were built from timber recovered from the wreck of the Amokura.
John Gander sold her many years ago. The current owner is Martin Farrand, who also owns the beautiful 1900’s classic 6m yacht, Scout.

Photo below ex trademe, so yes, she is for sale – a very salty girl that could take you almost anywhere.