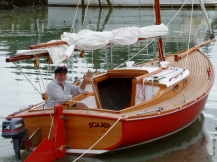 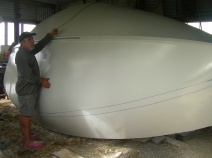 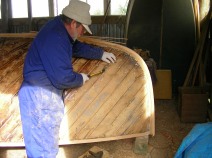 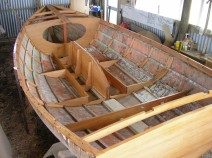 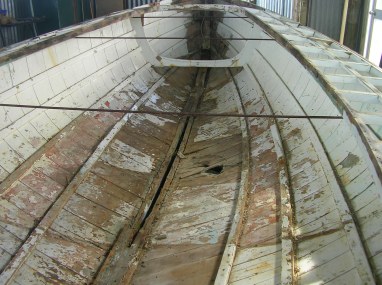 SCAMP
(another stunning yacht project that I just had to share)
Scamp was designed and  built by Roy Parris for his own use in 1943 while he was working at Shipbuilders building Fairmiles for the war effort. She was sold not long after and taken over to the Manukau by Jim Jenkins and consequently lost her launching registration number of V28 as Manukau boats couldn’t then be registered in Auckland. On Scamp’s return to the Waitemata she was re registered as V45.
I don’t have much history but know she was owned by Glen Trainer at some stage before she eventually went north to Tinopai on the Kaipara Hbr and sailed there for several years by Rod Neels. Ironically when I was looking for a restoration project I discovered her back in Auckland and owned by John Tattersfield and brought her back here to Tinopai. I knew Rod at the time but was totally unaware of the connection until he casually mentioned one day that he has once owned an 18 footer……….snap!
Early on I decided there wasn’t enough original boat left to consider a restoration so the project began as a  four year rebuild. Scamp was relaunched at Tinopai in Jan 2013, seventy years after she first touched water down on the Waitemata
Anyone interested in more detailed information on the rebuild or with any further history on Scamp is more than welcome to contact Greg Schultz  itzgreg@xtra.co.nz
Story & photos ex Greg Schultz
Footnote: Greg is looking for an N-Class to restore, if anyone can point him in the direction of a ‘good’ one, contact him at the email address above.