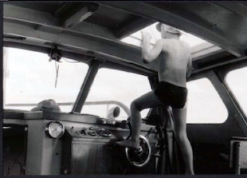 1st mate – Glenn
KOTARE
Back in June 2014 WW was approached with a request for intel on the 28’ kauri planked launch Kotare, a poplar name for boats. At the time Harold Kidd was able to tell us that she was designed by Bill Couldrey in 1960 for Frank Wilkins of Church St., Northcote to build for himself.  Wilkins launched her in October 1961 with a 45hp BMC diesel. Subsequent owners included Phil Prouse in 1997 when she had a BMC Tempest 62hp diesel.
We also learnt that Sharon Prentice also owned Kotare, her brother-in-law Geoff Prentice made the new smaller mast that you now see on her.
Back in 2014 she was based in Kerikeri. Recently she popped up on Lew Redwood’s fb, via a post by Joan Jameson on the ‘NorthShore, NZ Histories & Memories’ fb. Jameson posted the above photos of Kotare and Frank Wilkins during his ownership period.
Photos below from Kerikeri.
Can anyone update us on Kotare’s current location and ownership? 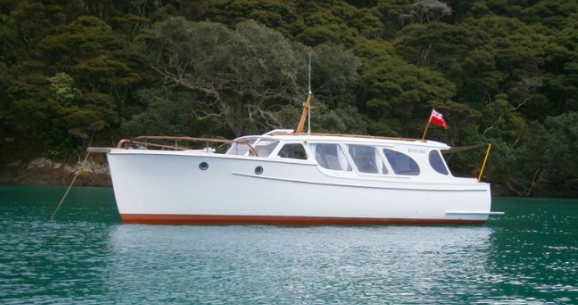