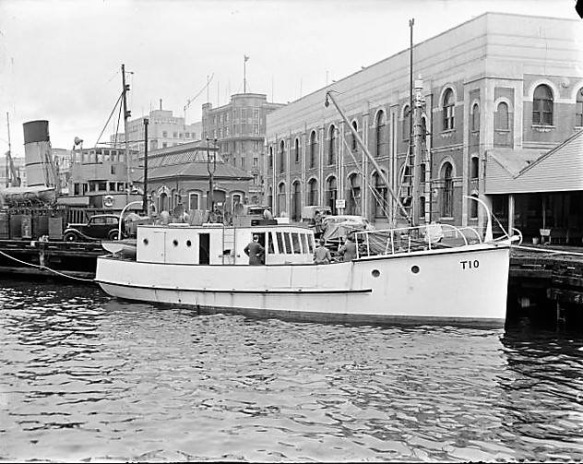 I recently received the above colour photo of Tio from her owner Richard Cross, the older b/w photos popped up on fb.

Richard commented that he had fully re-corked her 3 years ago,and was chipping away at the interior fitout. He has purchased the majority of big ticket items including new solar set up and batteries.
The engine – a Detroit 671 two stroke, had a  top end rebuild last year and the real reason for today’s story is Richard is looking for advice on what to do. A bottom end bearing has now gone and having spent a lot of money last year on the engine, he is looking for advice of what options he has, as he is currently not in a postion to engage last years mechanic – so is there someone knowledgable whose brain Richard could pick?
Also looking for input on the design layout for the stairs to the old hold, which he is thinking will be two double cabins, storage, office and workshop.
Tio is 55’ in length, 28 ton, designed by Hubert Levy, built in kauri in 1953 by Jack Guard at Putatea Bay (French Pass) for the Marine Dept as an oyster research boat. Later served as a Navy Pilot vessel (registered ship number 316485).
Also did time as a Great Barrier Island passenger ferry. These days she is a live-aboard and I have to say sports midships, what would best be described as a ’shed’ 🙂
Any mechanically minded / qualified woody able to help Richard out with some advice? I’ll throw in a WW t-shirt and Lake Rotoiti Wooden & Classic Boat 2020 calendar to the most helpful – Richard can decide who that is 😉

VENUE DECIDED FOR WAITANGI DAY WOODY PICNIC – WAIKALABUBU BAY
After hours of reviewing weather forecasts, the WW weather guru has selected Waikalabubu Bay, Motutapu Island for the venue. Of course this could change but for now, that  is the spot.
If you haven’t RSVP’ed – click the email link below . Great numbers already confirmed for next Thursday 🙂     waitematawoodys@gmail.com