I know very little about the above launch Haku but given she is reported as being a Bailey & Lowe and built in 1912, she with be on HDK’s radar for sure.
The photo is ex a gent by the name of John Lowe’s fb page and he commented that this photo was “after I had finished her”. I will try and find one (photo) of before I started”
Keen to learn more about Huku and lets hope John sees this WW story and emails more photos to  waitematawoodys@gmail.com
Input from Harold Kidd. –
Because HAKU = Kingfish , there have been many launches of that name.
1. HAKU built by Colley Bros of Devonport in 1909
2. HAKU built as DOREEN by Arch Logan in 1912 and renamed HAKU by H H Partridge in 1913
3. HAKU built by Bailey & Lowe in September 1914 for H W Hudson, a 28 footer with a canoe stern which is this boat. She went to the Manukau in 1920 and is now in Tauranga. Her upper works have been changed and reverted to an earlier style of dee-front cabin top.
Input from Dave Stanaway
Photo below is Haku 2008 before McCallums sold her. The Peter is alongside her and was also sold.
I think Pony More’s son bought Haku. The photo location was McCallum’s yard at Westhaven. The McCallum’s kept her down near Kawakawa Bay to use as transport to Karamaramu Island. 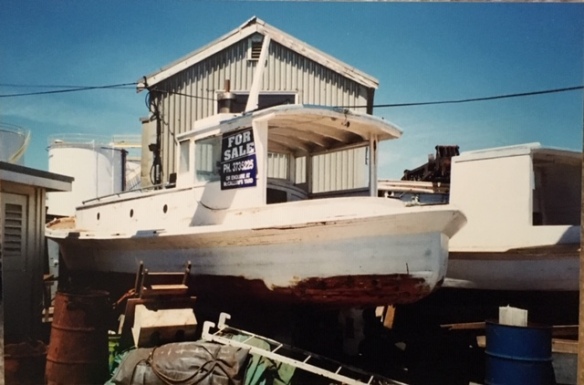